West District Blotter - A response about rash of car breaking on the Westside:

(Name of resident withheld)
I certainly feel your frustration.  We are just as frustrated by it, this is a city wide problem and not specific to your neighborhood .  I don't know why people feel we are doing nothing?  We are arresting kids right and left, in fact we arrested 5 more of them this morning.  The problem is that the criminal justice system is doing very little with them and they are usually quickly released.  This is something that must be addressed through elections of judges.  I have also heard with the closure of Lincoln Hills, there are few places that kids can even be sent anymore.

As far as video goes, we send out video from homeowners all the time.  If suspects can be identified they are charged.  We are doing everything we can with this and it is very frustrating to our officers to see the same kids they arrested for stealing cars out on the street again a few days later doing the same thing.

I also fear something very bad is going to happen over someone trying to defend their property.  I have begged and pleaded with citizens to keep things locked up and still many people don't.  I think a strong neighborhood watch program helps and citizens need to be vigilant about what is going on in their neighborhood then call us.  I can set you up with a person who can help with good neighbor (neighborhood watch) ideas but he does not take over his spot for a couple of weeks yet.  Our current person in that position is in the process of transferring to a training position.

The risk for flash flooding remains high this afternoon and into the evening. Madison residents in areas at risk of flash flooding should be prepared. Sandbag barriers should remain in place and vehicles should not be parked in low-lying areas.

Lake Monona is at a new historic high, and water flow through the Tenney Dam will be increased today to mitigate the rainfall received last night.

Lane closures on North First Street and East Washington Avenue are likely to occur during rainstorms. Other streets may need to be closed in response to flash flooding.

It has been reported that some residents in District 1 are already putting their sandbags at the curb. Please DO NOT remove your sandbags yet!  There is still the threat of rain over the long weekend and it is important to protect your property during this time period.  Storm sewers can still be overwhelmbed and overflow onto your property.

It is important to keep those sandbags in place! 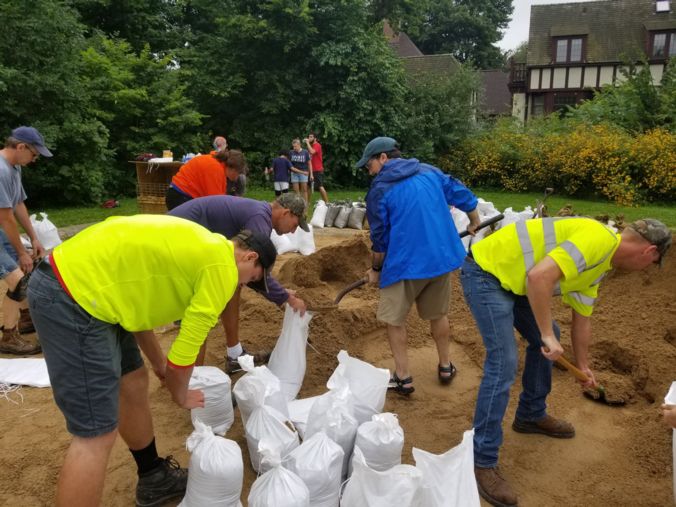