A quick update to let you all know that the applicant has submitted revised plans for their proposed building at 1848 Waldorf Boulevard. I have attached to them to this email and have get them uploaded in the next day or so to the proposal's Legistar page (https://madison.legistar.com/LegislationDetail.aspx?ID=3823930&GUID=B2FE9DFC-EC6C-485E-B745-D35D654DF6BE&Options=ID|Text|&Search=54250). These revised plans have been routed back through the City agency review process. In short, a non-exhaustive list of the changes are: 1) they have shifted the southerly "annex" to the eastern facade, along with the main pedestrian entrance which was formerly accessed through the basement level of that annex; 2) they have added a dwelling unit to this eastern projection (for a new total of 34); and 3) they have shifted the parking garage entrance from the southern to the western elevation.

The City meeting review schedule moving forward has not changed:
Urban Design Commission: Wednesday, January 16
If anyone has concerns related to the building's architecture or landscape architecture, this is the optimal meeting to provide that feedback, either in person at the meeting itself (you will have 3 minutes to speak) or via written letter (email is fine)...you are welcome to email them directly to me and I will make copies are made and distributed to the commissioners for review.)

Plan Commission: Monday, January 28
Feedback related to the land use, traffic, utilities, etc. is germain to the Plan Commissions review of the project. Similar to that noted above, you may either give your feedback in person at the meeting or email comments to me and I will make sure it gets distributed appropriately.

Although there has been a fair amount of press about it since Wednesday, Planning staff and Ald. Allen Arntsen felt that a reminder that Edgewood High School submitted a request on January 9 to have consideration of their requests related to the Goodman Athletic Complex on the Edgewood Campus referred at the January 14, 2019 Plan Commission meeting (see Ordinance ID 53954 for more information on the Edgewood application) could be useful. As a result of the Edgewood referral request, the stadium proposal will not be considered at Monday night's Plan Commission meeting, and no public hearing will be opened. The Edgewood referral request did not specify a date when the matter would next be considered, although we are aware that Edgewood may request a specific date for the Plan Commission to consider referring the project to prior to the meeting Monday night.

The purpose of this communication is to share the referral request (attached) with nearby neighborhood associations and leaders and other interested parties so that they might notify their members and constituents that the Edgewood request will not be heard at Monday night's Plan Commission meeting.

If you have any questions about the Plan Commission's referral of the Edgewood High School request, please let me know.

I share with you this email sent to all Alders from a citizen urging us not to approve the amended proposal offered by Mayor Soglin on Judge Doyle Square. At last nights Council meeting we voted to approve the amendment (15 for, 3 abstained, 2 excused absences).  You will read much about this final vote and the City's huge investment in Judge Doyle Square in today's news. I want you to be informed about my vote.

At the December Council meeting I voted against the proposal to pay Beitler $600,000 because I had had enough and resented this Chicago developer forcing this City into a corner with threats of deep and prolonged litigation. We delayed our decision and voted to reconsider the vote at the January Council meeting to allow further deliberations. These deliberations were largely between the Mayor and Mr. Beitler. As Alder Ahrens stated, we were presented with a much better negotiated deal. Thank you Alder Ahrens for your tenacity in the face of non agreement. Your tenacity caused me (and the Council) to take a critical look at the City's commitment to be diligent stewards over the interests of you the taxpayer. Alder Ahrens I will miss your tenacity. The days are gone where the good old boy handshake becomes enough. We must all own a share of the action that landed us at last evenings vote: the Mayor, the Alders, the Staff and of course  Beitler Real Estate Services. There is no win here. We get the hotel still with strings attached. I ask you to please remember this day. Please be informed as we move forward with this project. I need to here your opinions as you follow Judge Doyle Square. I received more emails about the Edgewood stadium construction and Jeffy Trail than I did on this huge investment of taxpayer dollars. The dazzle that I originally felt about Mr. Beitler's project I hope it will return...I have become a skeptic.

Here is Mr. Jacobs letter to the Alders:

Once again you are being asked to vote on something that was revealed only a few days ago. This rushed process for major votes items hasn't always given us the best result. Like the lousy development agreement with Beitler.

Let's remember how we got to Mayor Soglin's proposed agreement. Last May, the mayor informed you that Beitler said could not afford to build the apartments above our new underground garage without the city building the parking. The mayor's solution was for Madison to spend $11 million on a three story "podium" with sub-standard above-ground parking. This was supposed to help Beitler, or another developer in the future, build apartments on top of the podium.

Mayor Soglin (JD-UW Law) didn't tell you that when you approved the $11 million podium, you were breaking the development agreement. Now the mayor wants to give Beitler $700,000 of our money because of the vote he urged you to take back in May.

At first, the idea of removing Beitler from Block 88 sounds intriguing. But as always the devil is in the details and we've had more than our share of surprises with Judge Doyle Square.

First, the idea that this new deal is actually cost free because we'd save $700,000 by not demolishing the ramp on 105 before Beitler is ready to build should be dismissed at the outset. Whether it's Beitler or any other developer, it's also in their interest to not have to dig out the fill we previously put into the hole. This is a specious argument.

A supposed benefit of the mayor's new deal is a reduced timeline for Beitler to build the hotel. This again sounds intriguing but will Beitler actually do it?

The mayors response was that Beitler hasn't asked for any public subsidy for the hotel. So what? Beitler didn't ask for a subsidy for Block 88 either until we were backed into a corner. Now we are spending $11 million for Mayor Paul's Podium which our parking utility doesn't want.

I also asked if a subsidy would be required to entice a developer to finish Block 88 above the podium. If Beitler can't get financing to build - even with the city providing the parking podium - what other developer can build without a subsidy? After the tower cranes are gone, how much more money will it take to re-mobilize the project? Where will the new cranes even go? In the street? Won't the three foot thick concrete slab on the podium add big costs for utility installations? What developer wants to use the Beitler's banana shaped building plan which is set in three feet of concrete?

How much subsidy will be needed? The mayor didn't provide a clear answer.

On the whole, Mayor Soglin's new deal costs another $700,000 but does little to solve the mess and ever increasing costs of Judge Doyle Square.

Regaining Block 88 development rights isn't worth much if Beitler's rights will simply expire in a few years anyway. It's likely that a public subsidy will be needed for Block 88 in any case.

A subsidy will most likely be required for Beitler's Block 105 as well.

There is one scenario that could take advantage of regaining the Block 88 development rights. With all the air rights available - not just the podium - the two levels of podium parking could be eliminated. The podium would consist of only the first floor commercial, bike center and underground parking entrances. Then 11 stories of high value taxable development could occur - instead of only nine stories. The ugly aluminum screening around the above-ground parking would go away. The parking that's lost can be regained on Block 105 after Beitler fails to build there because we finally decide he gets no more subsidies.

Thank you to all who joined me at Yola's Café in December.  "Coffee with the Alder" was a great success!   I enjoyed the opportunity to meet everyone and hear your thoughts.  In February, I will again be at Yola's Café on Thursdays from 7:30 a.m. – 9:00 a.m.  Please stop by as your schedule permits.  I look forward to seeing you. 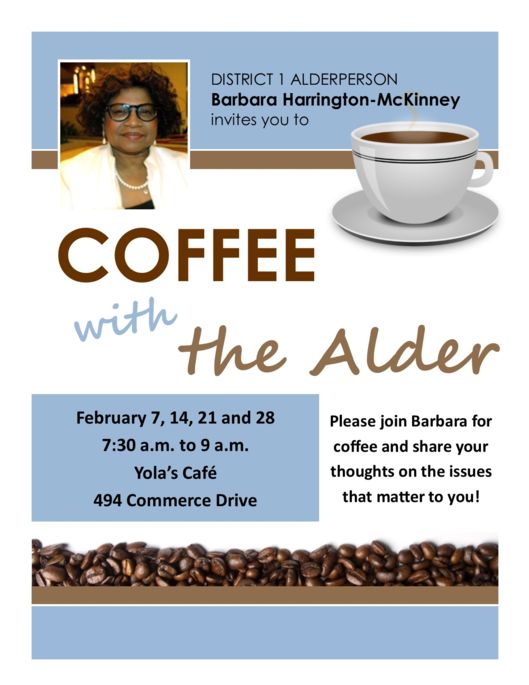