Juneteenth - A Message from Mayor Rhodes-Conway

WHEREAS, according to Wallethub's recent study of 50 states, Wisconsin ranks as the state with the worst economic racial inequality across eight major metrics, including median income, unemployment rate, homeownership rate, and poverty; and

BE IT FINALLY RESOLVED, that the Madison Mayor and Common Council Leadership proclaim June 19th, 2020, in commemoration of Juneteenth. 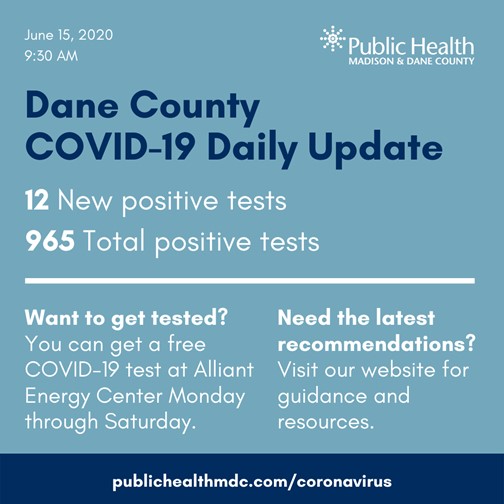 As of this morning (6/15), 965 people have tested positive for COVID-19 in Dane County, up 12 from yesterday. Of these cases, 7 are from the community test site, 2 are from a facility cluster, and the rest are from other sites (such as clinics and hospitals).

Today we published a new blog post: Inequities Evident in Dane County COVID-19 Data. The percent of COVID-19 cases who are Black is now three times higher and the percent of cases who are Hispanic is 2.3 times higher than what it should be given population size. These inequities also exist when looking at hospitalization rates. We are also seeing a higher percent positive rate for Hispanic individuals than any other group. Our latest brief on Race and COVID-19 illustrates these disparities.

Current Order
We are currently under Order #5, which places us in Phase 2 of the Forward Dane plan.