I trust you're enjoying this lovely summer-like weather.

Here are some updates as we head into the weekend:

Vilas Park Drive will reopen for vehicles this weekend and next for Democracy in the Park. The event, which is designed to make it safe and easy for residents to turn in their absentee ballots, is scheduled for this Saturday, September 26 and next Saturday, October 3.  The barricades will be put back in place on the following Monday morning.

Plans for the rest of the winter remain unclear. There is interest in providing access to the shelter during the ice-skating season. I've discussed this with Eric Knepp, Parks Superintendent, and Yang Tao, City Traffic Engineer. One idea would be to reopen the drive to through traffic but create an 18-foot buffered bike and pedestrian lane with barrels. The other idea would be to open up access to the shelter parking lot, but not through traffic, moving the barricades to the other side of the shelter parking lot entrance. This would create two way traffic on a portion of Vilas Park Drive, but the overall traffic levels would be reduced significantly by taking away the commuter "short cut" traffic.  We have some time to sort this out before the freeze, so if you have feedback, please contact me at district13@cityofmadison.com or 608.424-2580.

The issue of through traffic on Vilas Park Drive has been a key point of discussion in the Vilas Park Master Plan project. The closing of the Drive in response to the pandemic has provided Parks and Traffic Engineering with lots of feedback, mostly positive. At the same time, there are concerns about equity and access as we determine the best way to go long-term. The next public neighborhood meeting on the Plan has not been scheduled yet but will take place in late October or early November.  Prior to that public meeting, a joint meeting of the Resident Resource Group and the Community Partners Advisory Group, two focus groups comprised of residents and stakeholders, will take place on October 15.

Autumn is here and we'll soon be dealing with falling leaves. 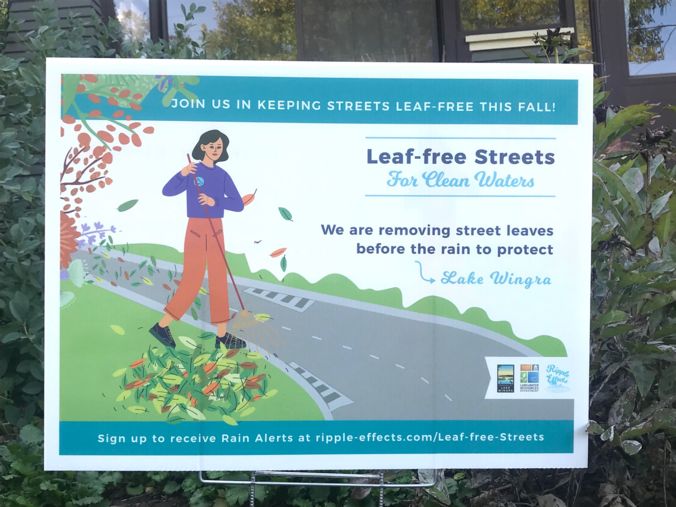 Please help keep streets leaf-free this fall by removing street leaves before the rain to protect Lake Wingra, Monona Bay, and all our lakes.

Sign up to receive Rain Alerts at ripple-effects.com/Leaf-free-Streets. The City's new leaf pick-up strategy will make it easier to keep leaves out of the streets as you'll now know the exact day leaves will be picked up in your neighborhood.

Remember -- one pound of phosphorous from leaf run-off can generate 500 lbs of that disgusting blue-green algae!

Judge Everett Mitchell, who recently became the presiding judge of the juvenile division for Dane County Circuit Court, was one of the keynote speakers at the forum.  Judge Mitchell showed a clip from a PBS documentary called Not Enough Apologies.

The documentary is gripping and provides a useful balance to the discussion. I've long been drawn to the work of Father Greg Boyle and Homeboy Industries, the largest gang intervention and re-entry program on the planet. The PBS documentary referenced by Judge Mitchell strikes the same chord of compassion.

I have reached out to Judge Mitchell, other community leaders, and our two police captains, Mike Hanson and Jason Freedman, about convening a similar discussion for residents in District 13.

I continue to push for joint City/County/UW coordination of an emergency response to the rise in homelessness as winter approaches and CARES Act funding dissipates. My concern is that the clock is ticking and we need a solid back-up plan if Congress does not renew the funding that is currrently paying to house homeless families in hotels.

I'll keep you updated on this and other issues.

If you have questions or concerns, feel free to email me at district13@cityofmadison.com or ccall me 608.424.2580.

Enjoy the nice weather and have a great weekend.