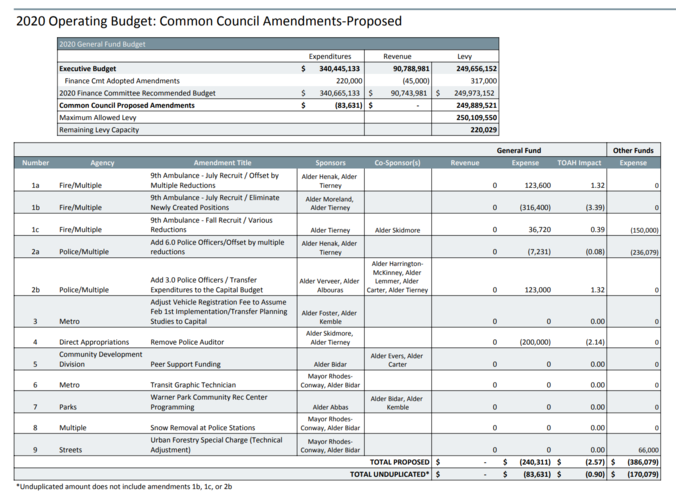 Last night the Common Council kicked off our 2020 Budget session. You can watch the meeting here. Following three hours of public comment, we took up the Operating Budget and worked through the first five amendments that proposed increases to fire and police staff before recessing the meeting around 11:30 pm.

Amendments 1a, 1b, and 1c all proposed to increase Fire Department staffing to bring an ambulance to Fire Station 14. The amendments each proposed adding 10 additional full time positions at an annual cost of $826,000 and making various cuts to other programs including:

While the addition of a 9th ambulance would improve response times, particularly for southeast and eastside residents, this is a significant increase in a very tight budget and I could not support any of the proposals that would have reduced or eliminated the other important investments. There is a strong case to be made for having an ambulance at Station 14 and I look forward to working on a long-term plan that can make that a reality.

Amendments 2a and 2b both proposed to add additional authorized strength to our Police Department (6 and 3 additional officers respectively). Concerns about the perception of increasing crime and interest in improving staff morale were cited as the two primary reasons to consider the additional staffing.

Alder Furman provided some good context about funding and support for our Police Department within the city budget in his comments at last night's meeting and in even more detail in this blog post from last week. If you have strong feelings on this issue, I'd recommend you take the time to read it. In short, the executive operating budget put forth by the mayor increased funding for the Madison Police department by 7.6% compared to last year. At the same time, our annual revenue goes up by only about 2% each year. In the context of strong opposition to the $40 vehicle registration fee and strict levy limits imposed by the state, it is unsustainable to have the operating costs of our largest department consistently outpace our available funding.

Because of this fiscal reality and because the arguments in favor of increasing staffing were primarily intended to address a fear of crime rather than to actually reduce crime, I did not vote in favor of either amendment. As I stated in my remarks, I am very open to increasing staffing in the future, but need additional information on staffing levels and retention issues across city departments before continuing to add additional police officers.

We will reconvene today at 5:30pm and pick up where we left off to work through the remaining operating amendments (#3-9) before taking up the capital budget. Anyone interested in watching from home can tune in to City Channel beginning at 5:30 pm. I'll provide another update following tonight's meeting.