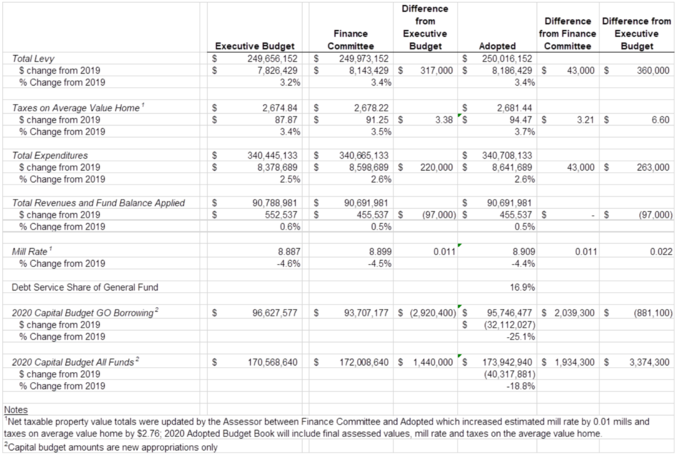 On Wednesday of this week, the Common Council met for the second night and completed our 2020 budget work. More details on the first night can be found in this previous blog post. Anyone interested in watching a recording of the final 3.5 hours of meetings can do so here.

All of the remaining operating amendments were passed with the exception of #4 which would have removed funding for the Independent Police Monitor. The creation of this position was the primary recommendation of the MPD Policy & Procedure Review Ad Hoc Committee that worked for nearly 4 years to develop their recommendations. The Common Council voted to accept this recommendation at our 8/6/19 meeting and rejection of this amendment reaffirmed that earlier decision. You can read the final report with detailed information on the Independent Monitor and Civilian Oversight Board as well as the other 176 recommendations here.

Following completion of the operating budget amendments, the council took up 14 capital budget amendments. Along with a new ambulance and additional squad car, two other notable amendments were approved: #5 - Addition of $500K to our Affordable Housing fund and #11 - $350K towards implementation of Vision Zero/Traffic Safety. The latter was an amendment that I put forward and that ultimately included the cosponsorship of every other alder on the council. It will allow us to implement safety enhancements to some of our most dangerous intersections and corridors in 2020 and marks the beginning of critically important public safety work that will continue as we implement Vision Zero.

The resulting tax levy for 2020 is $250M with $96M in General Obligation borrowing. This represents a 3.4% increase in tax levy and a 25.1% decrease in borrowing as compared to 2019 and does not include the $40/vehicle registration fee that was previously adopted by the council. The increase in property tax to the average home (valued at $300,000) will be $94.47.

I'd like to thank everyone that shared their thoughts and priorities with me as part of this budget season. The Common Council Executive Committee will begin discussions on the 2021 budget much earlier than we have in prior years and as part of that work I will be asking that we commit to providing more and better opportunities for residents to weigh in on their priorities.