It's a quiet week for city business with the Thanksgiving holiday. I'm sharing information on two ad hoc committee reports that were recently published and that are under review by the common council. For anyone interested in policing or in the structure of city government, these reports are worth reading in their entirety. Important questions (and votes) often get oversimplified by media coverage and by those that don't take the time to understand the complexity of big issues. Both of the reports below speak to important issues that many in the community may want to weigh in on. 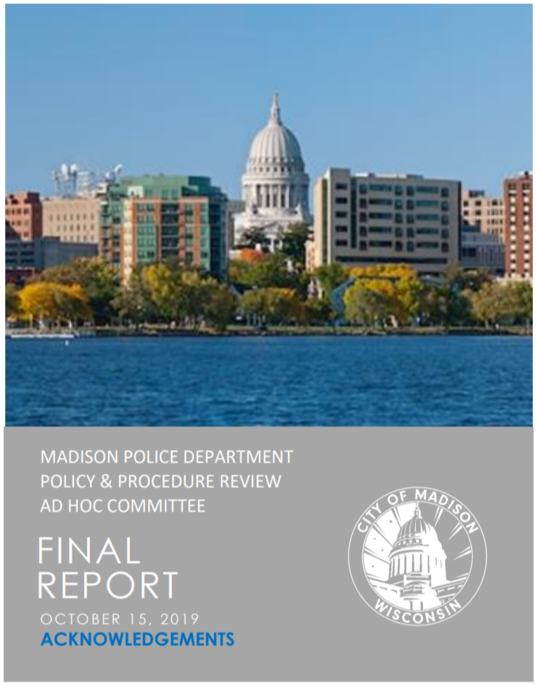 In May 2015, the Madison Common Council passed a resolution declaring the city's intention to 'review policies, procedures, culture and training of the Madison Police Department by hiring an expert in community policing, law, problem oriented policing, racial disparities, restorative justice and implicit bias and the creation of an ad hoc committee'.

Subsequently, an ad hoc committee was formed, committee members were appointed, and the group held its first meeting in November of that year. In 2016, an RFP was issued for an outside expert consultant to perform a comprehensive review and the OIR Group was selected.

The OIR Group completed its review and released its final report including 146 recommendations in December of 2017. The Madison Police Department Policy & Procedure Review Ad Hoc Committee then went through this report and considered each of the recommendations along with other recommendations received over the course of their work.

In October of this year, the Ad Hoc Committee published its final report including 177 recommendations. That report is currently in referral to various city committees before it returns to the Common Council for acceptance.

This work, spanning more than four years, led to the recommendation to create the Office of the Independent Monitor which was adopted by the council and included in the 2020 budget. Anyone interested in more details should consider reading the full reports linked above. 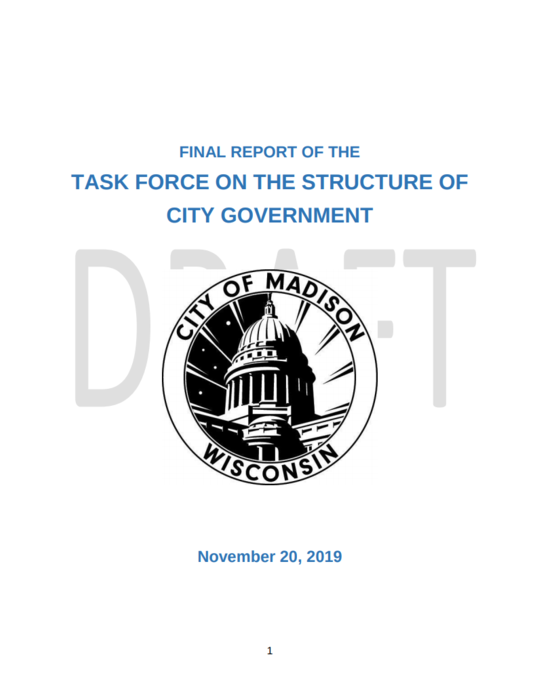 Recommendations include moving to a full-time rather than part-time council, establishing term limits, and a restructuring of our board, committee, commission system. You can find the complete final report here. This report will be introduced at the next common council meeting and be referred to various committees for review.

6:00 pm - Madison Travel Circle presents Quebec City: 400 Years of History: Join Kent Wenger as he explores Quebec City, one of the oldest European cities in North America (founded in 1608) with the only remaining fortified city walls north of Mexico. But Quebec City isn't just about the past -- it's vibrant, intensely friendly and exciting concentrating on both people and food. To put it bluntly, Quebec is one of the closest places you can go and feel like you're someplace completely different. Bon Voyage!

8:00 am - MMSD Commission: The Madison Metropolitan Sewerage District Commission will also be taking up the issue of PFAS contamination at this meeting.

5:30 pm - Zoo Lights: Celebrate the most wonderful time of the year with one of the most unique events in Madison! This one-of-a-kind festival of lights begins the day after Thanksgiving and runs Thursday-Sundays from 5:30pm - 9pm until December 29th. All proceeds go directly to support the animals at the zoo. Sip on hot chocolate and stroll through the zoo at night while seeing over 800,000 holiday lights! Pictures with Santa are available every night of Zoo Lights and tickets include free carousel rides. Come see the zoo like you've never seen it before!

10:00 am - Redefining Stigma: Postpartum Workshop with Artist-in-Residence: As a new mother, the artist-in-residence is interested in creating a safe space for new parents and their kids to create artwork. The artist-in-residence will show works by artists who were/are parents, facilitate a discussion about parenthood (particularly motherhood) and stigma, come up with ideas for posters, and create a collaborative installation.

2:00 pm - Redefining Stigma: Forming Feelings Workshop with Artist-in-Residence: What do feelings look like? Explore possible shapes, colors, and forms that different feelings might have. Feelings will be expressed in colorful drawings and created in clay.

2:00 pm - The Basics of Storytelling: In this 90 minute workshop, participants will learn how to find and shape stories. You can bring an existing story to shape or find a new story from your life. We will discuss the five main elements to a story and how to discover them. By learning dynamic storytelling elements, you will gain the tools to pull short stories out of everyday life. This will be an interactive workshop with a mixture of mini lecture, 1:1 dialogue and small group work.

Click on 'details' in the events below for links to additional details and meeting agendas. You can find a full list of city meetings here.

Subscribe to the District 15 Blog via the sidebar above to receive an email when new updates are published. If you have any questions or thoughts you can reach me at district15@cityofmadison.co