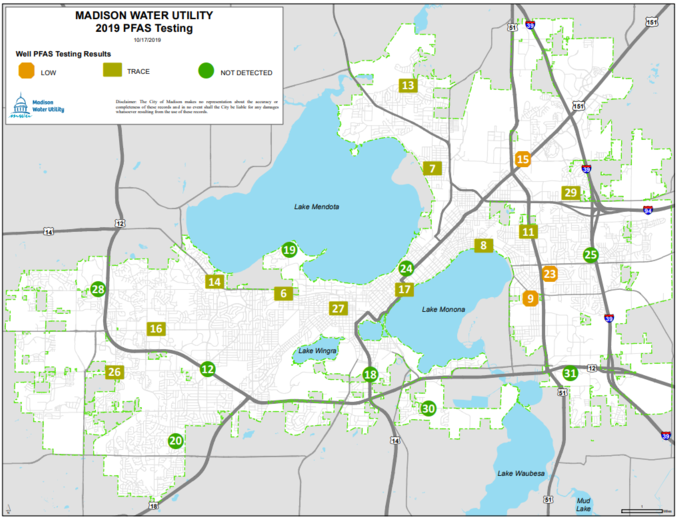 Last week, the Isthmus ran a story that left a lot of residents feeling concerned. In particular, the report highlighted elevated levels of PFAS in water samples from Well 9 which supplies portions of the Glendale and Lake Edge neighborhoods.

In follow up to those questions and concerns, I've asked staff from the Water Utility and the Public Health Department to hold an informational meeting for neighbors. Several of these meetings were held last year for residents in the Well 15 service area and were very beneficial for people to learn about the issue and share concerns. The meeting will be held on Thursday, January 30th at 6:30 pm at Sennett Middle School - Dowden Auditorium.

In addition to the news article focused on PFAS in our drinking water, there is ongoing work around PFAS contamination in our surface water and recently released results from fish tissue samples. These efforts are focused around Lake Monona and Starkweather Creek. Based on the recent fish tissue samples, DHS and DNR have updated the Fish Advisory. You can read more details in this press release from DHS/DNR or in this City of Madison release.

From Amy Barrilleaux, Public Information Officer for the Water Utility:

Madison Water Utility has been getting calls from people in the Well 9 area. It's no wonder. Well 9, located on Spaanem Ave., appears on a map in the story as a bright orange dot because tests show a total PFAS concentration at the well of 52 parts per trillion.

The story includes a comment from me explaining why the utility doesn't stress total PFAS concentration when communicating about detections: "PFAS compounds aren't really an apples-to-apples comparison. Some types are far more concerning that others."

But the rest of my emailed response is cut: "For example, Well 9 on Spaanem Ave. has 36-42 ppt of a compound called PFBA. Minnesota has a health-based guideline for that compound in drinking water of 4,000 ppt."

To be honest, I had made a mistake. The Minnesota guideline for PFBA is 7,000 ppt. I emailed a short time later with the correction, but it didn't really matter. The information never made it into the story.

What does matter is that the concentration at Well 9 is a fraction of the only guideline for that compound in the United States.

Last October, Grande presented a comprehensive report--all results from more than 50 samples collected at 23 wells--to the public at the Water Utility Board meeting. The report is on Madison Water Utility's website, and I personally emailed it last fall to everyone who follows the utility's PFAS Testing and Results email list. Anyone can sign up for emails at madisonwater.org/PFAS, and everyone should.

Corrections sent to the Isthmus immediately after the story came out:

The caption: "Source: Madison Water Utility" implies that these are our maps. They are not.

The levels for PFAS at wells 19, 28, and 30 are zero, which is what we report publicly. The levels in your map appear to have come from the lab reports I sent, which do show PFAS detections. However, those detections are generated by false positives in the lab blanks, not from the water samples from our wells. In the future, I would appreciate the opportunity to address a discrepancy like that rather than have incorrect information make it to publication. This is also a reason why we don't post lab reports online. They can be difficult to interpret correctly.  (corrected)

What we're going to find out, it's going to be like lead. The desired level is zero," says Laura Orlando, an environmental health professor at Boston University who studies toxic substances, including PFAS, and their exposure to humans. Orlando notes that lead concentrations are measured in parts per million, with 15 parts per million being considered dangerous.

The study linked in your article from Philippe Grandjean found 1 ppt trillion of PFOA and PFOS to be safe. You article, as I mentioned on the phone, incorrectly says "PFAS." Please include that in your corrections.

It is disappointing that the DHS appears not to have been interviewed about why the recommended standard for PFOA and PFOS was set at 20ppt, when another researcher is quoted in the article claiming it should be 1 ppt. At the very least the DHS or DNR, the regulators tasked with protecting public health, should have been allowed to address this claim.

At the time, he was serving on the water utility's board but he'd never seen any indication that officials were worried about contamination. "They never would say there was a problem," Ahrens remembers.

Madison Water Utility should have been asked to comment on this statement. It is false to say that we were not worried about PFAS at Well 15. We were testing monthly at two separate labs, launched a groundwater/capture zone study to model travel time of PFAS from Truax to the well, and we were in frequent contact with the DNR and Public Health Madison Dane County.

Emails obtained by Isthmus show that the utility was uncertain about what to do when PFAS were found at 55.69 ppt in well 15 last February.

Joseph Grande, water quality manager at the Madison Water Utility, sought advice from Doug Voegeli, director of the environmental health division at Public Health Madison and Dane County. Voegeli responded: "I think that the mayor wants to shut down this well and we are stating that it is not necessary."

Madison Water Utility should have been asked for a response to these emails. "Uncertain" is a mischaracterization.  This communication was part of an on-going dialogue between MWU and Public Health Madison Dane County staff. MWU and PHMDC staff routinely correspond about drinking water and public health.  This bridge between the two agencies is reinforced further with the Director of Public Health, or their designee, serving as an ex-officio member of the Water Utility Board.

The article's focus on drinking water implies that drinking water is the primary PFAS exposure route in humans.  98% of Americans have PFAS in their blood – a statistic reported in the article.  However, DHS staff has repeatedly stated that only 20% of PFAS exposure comes from water.  The principal source is dietary.

It is also important to note that all wells currently in operation meet every PFAS drinking water standard set by any state in the U.S. including Vermont and New Hampshire, which have the toughest PFAS standards.

PFAS have been making headlines in Madison for more than a year, thanks in large part to Powell.

Little if any of the substance of these stories would have been available if not for the voluntary PFAS testing that MWU has been doing.  In 2019 alone, MWU collected over 50 samples for PFAS analysis, testing for 24-30 different types of PFAS and at the lowest possible detection limits, far more testing than any utility in the state. As you know, the testing we have been doing is so advanced, the State Lab of Hygiene turned to us to help it become certified in PFAS analysis.  News stories were made possible by this testing and our transparent reporting of the results. Our first media inquiry came in the summer of 2018 after a WISC-TV reporter had seen a web story and social media links I put out on PFAS. Other utilities are reluctant to even test much less report what they find (ironically, because of how the results are often mischaracterized in media reports). Maria has done a great job working to bring attention to this issue. We have been working to do the same.