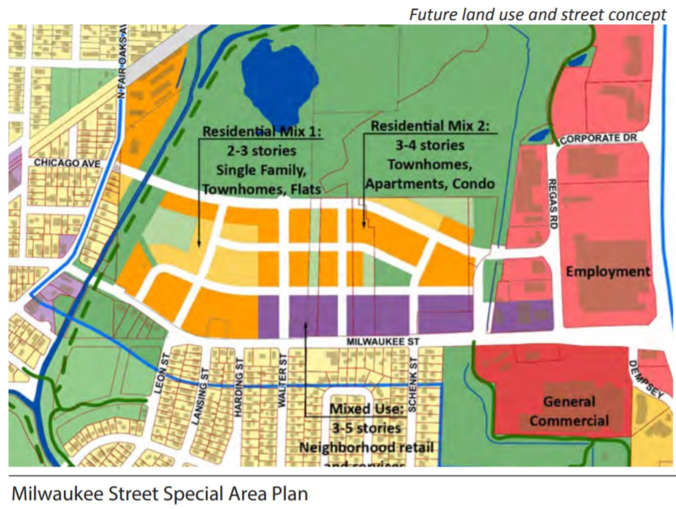 In Sunday's weekly update, I shared information about a proposal for an Amazon Distribution Center that was in front of the Plan Commission last night. As I mentioned in that post and at last night's meeting, the unique circumstances of this item meant that I had very little advanced notice about the proposal and many of you were caught off guard as well. I was able to meet with staff earlier on Monday and they also answered Plan Commission questions at last night's meeting. You can watch the deliberation on City Channel here. My comments to the commission start at 05:05:21 (12 minutes) and ended with my recommendation to deny the request. After over 90 minutes of debate, the Plan Commission did vote to deny the request on a 6-2 vote.

So what does that mean?

Permits for the plans submitted to the city for a joint redevelopment of the two parcels will not be issued based on the Plan Commission's decision. The applicant may resubmit an updated plan for a project that does not include the 3630 parcel and permits would be issued following staff review - a decision on a modified proposal solely on the 3650 parcel would not go to the Plan Commission.

How could this be built when our adopted plans call for something very different?

Our current Zoning Ordinance defines 'permitted uses' in each of our zoning districts. Property owners are allowed by right to use the property in a way that's consistent with the permitted uses. They still need to apply for permits to make changes to the property, but these permits are issued by staff after review and are not brought before the Plan Commission for approval. 'Conditional uses' are uses that are not permitted on the property and require Plan Commission approval in order to be allowed. Both the 3630 & 3650 parcels are currently zoned IL - Industrial Limited which allows for a number of uses, including use as a distribution center. The owners of these properties can generally use them for purposes that are permitted and do not require special permission.

Why do we even bother making plans if they don't mean anything?

The Milwaukee Street Special Area Plan was adopted by the Common Council and is considered a supplement to our Comprehensive Plan. The Comprehensive Plan along with adopted neighborhood and special area plans are our primary tool for land use planning. They are used as the basis for decision making around conditional use approvals and for rezoning and replatting requests. Consistency with our adopted plan is also the primary standard of approval for demolition permits, which is why the Plan Commission voted to deny the proposed use of the 3630 parcel even though it would have otherwise be considered a permitted use.

So what does the future hold for this area?

As I mentioned above, any owner of property in this area can generally use their property for permitted use provided they meet all other regulations. The 3650 parcel is zoned IL - Industrial Limited and can generally be used for any allowable purpose of that designation. The 3630 parcel holds the same zoning, but because the demolition permit process requires that any future use be consistent with adopted plans, any new use of that parcel will require Plan Commission approval and would be expected to be consistent with our adopted plans. The parcel to the west of that (3618) is zoned TR-C1 (a residential category) and the largest Voit parcel is zoned Agriculture Transition with part of it zoned Heavy Commercial. The Voit parcel is also currently not part of the City of Madison, but rather the Town of Blooming Grove. Any proposed use of these properties that is not permitted by their current zoning, would require public process and approval before moving forward.

Is there anything else we can do to help implement our adopted plans?

I have started conversations with city staff about updating the zoning of the City of Madison parcels in this area to better reflect the land use that is called for in the Comprehensive Plan and in the Milwaukee Street Special Area Plan. It is my belief that following an extensive planning exercise like the one carried out to develop these plans, we should update our zoning map to ensure that future land use is consistent with what is called for in our plans. This has larger implications than just the Milwaukee Street area and will be an important policy question for us to consider.

I want to thank all of you that came out and provided public testimony at last night's meeting and to those that emailed me with your questions, comments, and concerns. I think it's incredibly important for big decisions like this to happen with public input and in consideration of the well being of our community. Thanks for participating and stay tuned for additional updates.