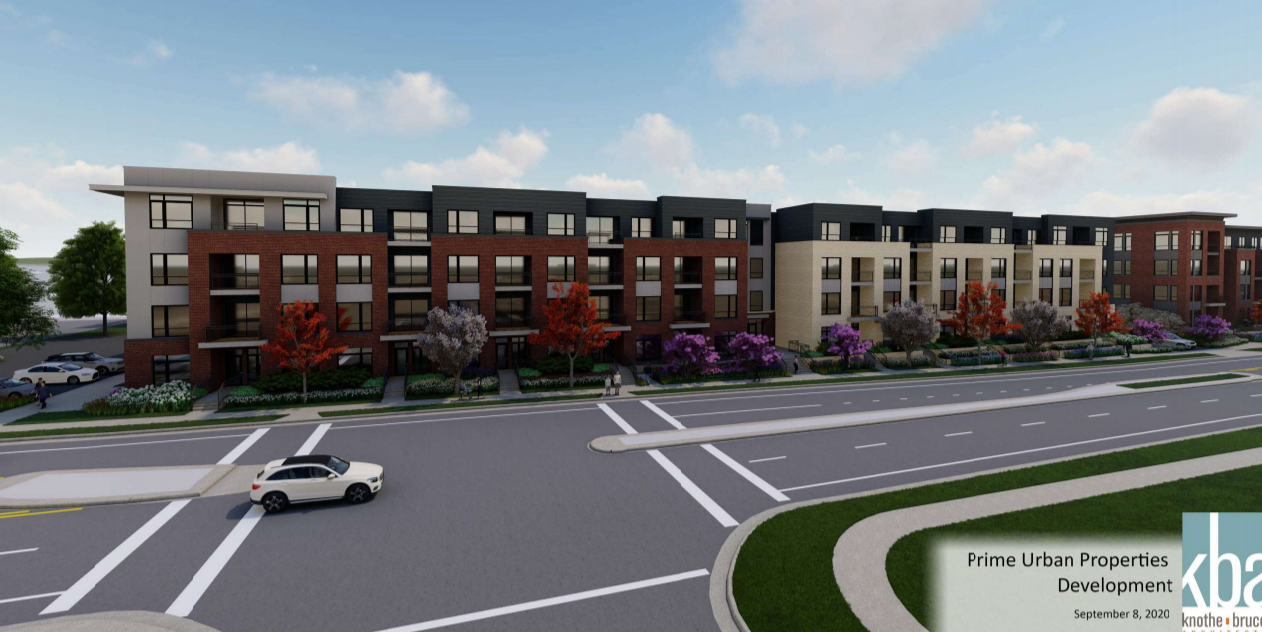 On Monday, September 14, the Plan Commission will hold a public hearing to consider a proposal by Joe Krupp and Prime Urban Properties to demolish three commercial buildings at 109 and 209 Cottage Grove Road (former Jade Monkey & Lakeside Shopping Center) and 3900 Monona Drive (Exhaust Pros) and to allow construction of a four-story mixed-use building and a four-story apartment building in two phases.

Following an initial neighborhood presentation by the developer on June 8, the application was submitted on July 8 and reviewed by a number of city agencies including Planning, City Engineering, Traffic Engineering, Zoning, Fire, Parks, Forestry, Water, and Metro Transit.

In order to proceed with the proposed project, the Plan Commission will need to approve a change in zoning, an updated survey map combining the three parcels, demolition of the three existing structures, and conditional use for a multi-family dwelling with greater than eight (8) units, a building taller than three stories, a building containing two or more uses that exceeds 10,000 square feet of floor area, and a mixed-use building with less than 75% non-residential ground floor area.

The Plan Commission will evaluate the proposal against the standards of approval codified in our Zoning Code Ordinance and in relation to our adopted comprehensive plan (Imagine Madison) and other adopted supplemental plans including the Cottage Grove Road Activity Centers Plan.

A Planning Division Staff Report was prepared for the Plan Commission that provides additional details about the proposal and ultimately recommends approval, subject to a number of conditions stipulated by the city agencies that reviewed the proposal.

At the June 8 virtual neighborhood meeting, the developers received a mix of feedback from those in attendance. In this earlier blog post, I summarized that feedback which included concerns ranging from the significant loss of commercial space, to concerns about traffic and parking, to the lack of green space and trees proposed on the site. On August 27, the Lake Edge Neighborhood Association submitted a letter sharing their feedback on the proposal including a recommendation that the developer not be allowed to proceed with demolition of the Lakeside Shopping Center.

While I'm sympathetic to the concerns that have been shared with me by a number of neighbors regarding the potential negative impact of additional housing density in this area (increased traffic congestion, loss of available parking, and an overall change in 'feel' from a suburban to urban character in the neighborhood) our adopted plans have clearly articulated the community benefit of adding additional housing in a number of locations across the city. The Cottage Grove Road corridor is identified as one of those locations that can accommodate additional housing and that recommendation is codified in both of the adopted plans referenced above.

Adding this much needed housing in the area is not only consistent with these plans and important to support sustainable growth in the broader Madison region, but is also needed to support the desires articulated by many residents for increased access to additional businesses and services in the neighborhood. This was the one of the primary goals identified in the Cottage Grove Road Activity Centers Plan. In regards to the concerns with traffic congestion and parking, the proposal includes sufficient parking to satisfy the expected demands that would come with the new housing and Traffic Engineering does not anticipate significant traffic congestion issues as a result of the proposal.

On the other hand, I very much share the concerns that have been raised about the potential loss of 32,000 square feet of affordable and flexible commercial space located in what has been the very heart of the commercial district that has served the Eastmorland and Lake Edge neighborhoods for over half a century. I strongly believe that the demolition of the Lakeside Shopping Center will cause irreparable harm to the viability of this activity center and runs contrary to the vision articulated in our adopted plans. Displacing this existing commercial center with luxury apartments will not support the goal of creating an increasingly vibrant, walkable, and bikeable neighborhood for current and future residents.

A fundamental component of this process is the public hearing at Plan Commission scheduled on Monday. Since April, city meetings have been happening online via Zoom and members of the public are able to attend these meetings virtually and allowed to speak and share their thoughts and opinions on any item on the agenda.

If you want your voice to be heard, I encourage you to register here (item #13) in advance of the meeting. On the registration form, you can indicate whether you oppose or support the proposal as presented and will be asked to indicate if you would like to speak during the public hearing. I encourage anyone that feels comfortable to take advantage of this opportunity to speak to the commission and to share your perspective as an area resident impacted by the proposal. Speaking at the public hearing and making yourself available to answer questions from commissioners has the strongest impact in the process. For those that do not want to or are unable to speak at the meeting, you can still register your support or opposition on the registration form.

For anyone that would like to send written comments in addition to or instead of speaking, those comments can be sent via email using this link. The public hearing is scheduled to begin at 5:45 pm on Monday and anyone wishing to watch the proceedings can tune in here.