Milwaukee St Map Amendment at CC on Tuesday for Action

The Common Council will vote Tuesday night on a proposed zoning map amendment for properties located at 3614-3700 Milwaukee Street and 102-122 West Corporate Drive. This includes the property that currently houses the Amazon distribution center as well as several other properties in the area covered by the Milwaukee Street Special Area Plan. If approved, the zoning of these properties would be updated to support the future land use recommendations and goals adopted by the City of Madison and Town of Blooming Grove in December 2018.

On March 20, 2018, the City of Madison Common Council authorized Planning Division staff to prepare detailed land use and transportation recommendations for the Milwaukee Street corridor. The planning area was identified as "a unique opportunity to accommodate future residential growth in an area well served by transit, as well as provide opportunity for neighborhood-oriented retail and improve and expand parks and open spaces."

This joint planning effort with the Town of Blooming Grove was originally called for in the 2006 Intergovernmental Agreement and the need for the study was reinforced in recommendations from other plans and studies including the 2018 City of Madison Comprehensive Plan and the 2017 Darbo Worthington Starkweather Neighborhood Plan.

Following robust public engagement that began in April of 2018, a draft plan was prepared by staff and introduced and referred to the Transportation Policy & Planning Board, the Madison Food Policy Council, the Board of Park Commissioners, and the Plan Commission before it was ultimately adopted by the Common Council on December 4, 2018. The plan was also subsequently adopted by the Town of Blooming Grove on December 12, 2018.

One year after the Milwaukee Street Special Area Plan was adopted, the Plan Commission was asked to approve plans for a new parking lot to support an adjacent redevelopment of the former Swiss Colony site into a new distribution center for Amazon. You can find background on that issue in previous blog posts here, here, and here.

In short, because the zoning of these properties was never updated to reflect the desired land uses adopted in the Milwaukee Street Special Area Plan, the use of the property as a distribution center was "permitted" and not subject to a public hearing or Plan Commission approval. Many neighbors were confused and upset that they hadn't heard more about the proposal and objected to the proposed redevelopment as clearly inconsistent with the land use recommendations that were agreed to and adopted just one year prior in the Milwaukee Street Special Area Plan. 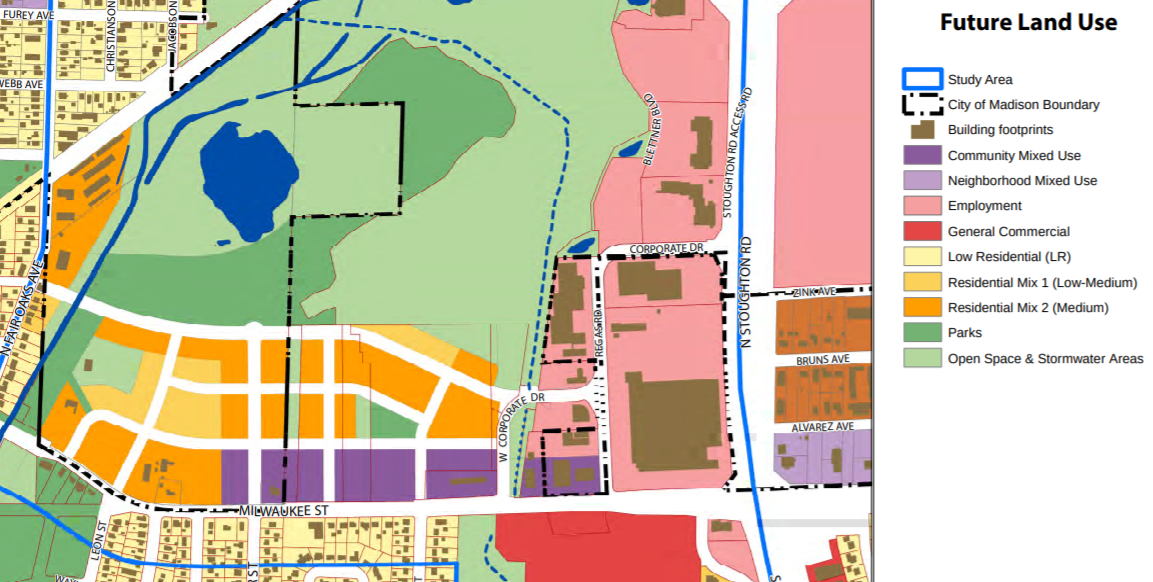 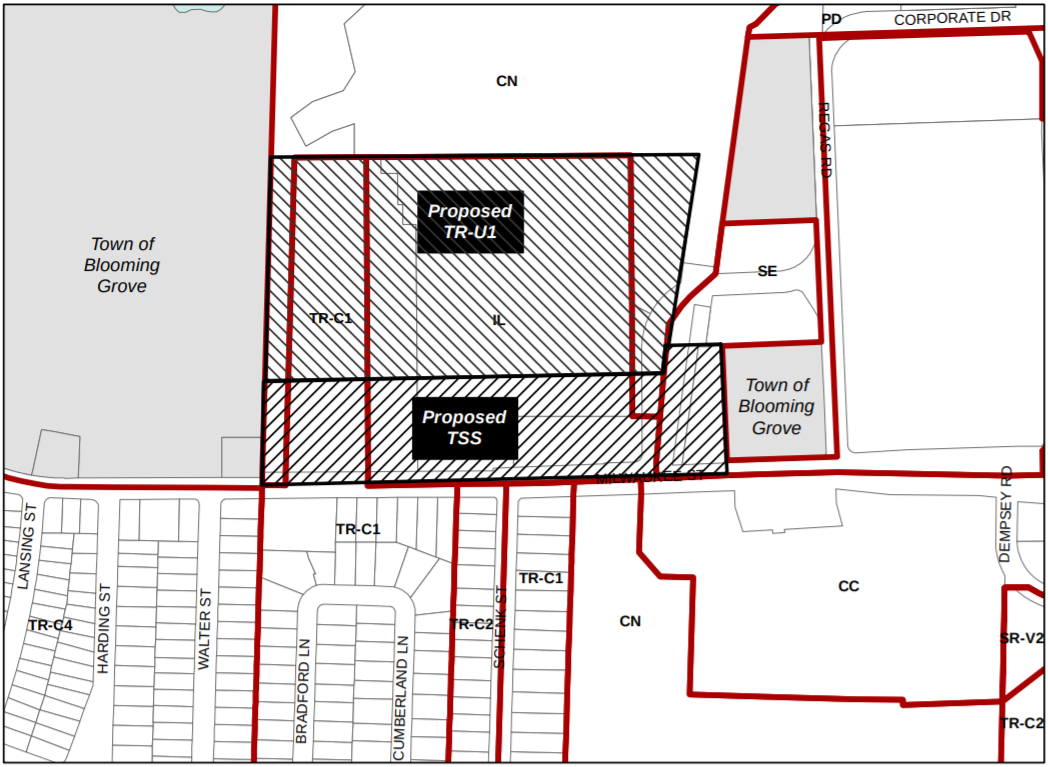 As a new alder representing this area of the city, I was equally surprised that a proposed development that was so inconsistent with our adopted plans could move forward without consent from the public or from our policy makers. I agreed with those that suggested that all of the energy and work that was invested into visioning and drafting the special area plan was apparently for naught. When I reviewed these concerns with staff, they acknowledged that leaving the preexisting zoning districts unchanged following adoption of the plan did not effectively move the plan forward and that, had we made the appropriate zoning changes following the plan adoption, the proposal for a distribution center would not have been permitted.

Following those conversations, I asked staff to evaluate our zoning map in relation to the adopted special area plan and to propose an amendment to the map that would best support the land use recommendations found in the plan. While such an amendment could not turn back the clock and undue the damage done, it would at least set the stage for future land uses that are consistent with the plan recommendations and would prevent future inconsistent uses from occurring.

After a detailed review, staff recommended amending our zoning map to change the current districts (largely Industrial) to a Traditional Shopping Street District (TSS) fronting Milwaukee Street and a Traditional Residential-Urban District (R-U1) in the areas north of there. I agreed with their recommendations and introduced a map amendment in September of this year.

At the Plan Commission meeting in November, the property owner of 3650 Milwaukee Street (Amazon site) objected to the proposed map amendment and to the future land use recommendations found in the plan. Instead, they prefer to maintain the current permitted use in perpetuity and are not interested in redevelopment of the property to conform with the adopted plan. Ultimately, the Plan Commission agreed with the map amendment as proposed and recommended approval.

In the short term, the change in zoning will have little immediate effect. While state law gives municipalities broad authority to change land use zoning and to decide what uses are permitted where, it also gives property owners significant protections for preexisting, non-conforming uses. Essentially, while the city can change the zoning moving forward and can prevent certain uses from occurring in the future, any use that is legally occurring at the time of the zoning change is 'grandfathered' in and allowed to continue regardless of whether or not it is allowed in the updated zoning code. This non-conforming use can continue indefinitely and is only extinguished after the use has been discontinued for 12 months.

So in the case of the Amazon distribution center, the use of 'package delivery' would no longer be a "permitted use" in the zoning code for that property, but the use would still be allowed since it existed before the change occurred. But at some point in the future, after the 'package delivery' use was discontinued, it would no longer be permitted in that location. All other uses that are currently permitted in the Industrial zoning, would not be permitted in the future effective immediately. The only other property with a current use that would be impacted by the proposed map amendment is the laundry located at 3700 Milwaukee Street. In this case, the use of 'laundromat' is still a permitted use in the new district (TSS) and so there would be no impact to continuing that use indefinitely at this location.

Since a protest petition was filed by the representatives of the property owners of 3650 Milwaukee Street (Leo Ritter Trust), approval of the map amendment as recommended by the Plan Commission will require an affirmative vote of ¾ of the common council. This is item #8 on Tuesday's Common Council agenda. You can find all of the meeting details here, along with a link to register for public comment at Tuesday's meeting. Anyone wishing to submit written comments can send an email to allalders@cityofmadison.com. The Eastmorland Community Association submitted a letter of support for the proposed map amendment on Friday that can be found here.

As always, if you have any questions or information you'd like to share, you can reach me at district15@cityofmadison.com.