I am a strong proponent of body-worn cameras (BWC). When I went door-to-door during my campaign, talking to voters, the vast majority of people in District 18 agreed that this was a common-sense tool that we should provide to our officers as part of our commitment to community policing.

A pilot program has been proposed in the North District, right here in the area I represent. Our officers would have access to 48 body cameras. The Common Council approved $83,000 for the program in the 2021 Capital Budget but we have not yet taken the final steps to approve it. It is time to do so.

The costs can't be considered in a vacuum without considering the benefits and some of those benefits can't be quantified, like avoiding complaints, lawsuits, settlements and verdicts and the community being able to see what happened in a high profile case. One of the cases was the death of Tony Robinson in 2015. The marginalized community has been screaming out for Body-cams  since 2015 in order to know what took place.

I believe in the Body-worn cameras because of the three T's: Transparency, Training for our officers and Trust building between officers and our most marginalized community.

Greg Jones of the NAACP who said "without BWCs, all  we  have  is  the  account  of an incident  provided by  police, so if  we  don't  have  a  tool  like  this, we  lose  this  battle." NAACP locally and nationally support body-cams. Judge Everett Mitchell "urged adoption of BWCs" stressing "the importance  of  BWCs  for  creating  a record  that  can  be used to contest  police-officer  accounts  of  incidents."  Dr. Floyd Rose of 100 Black Men "told the Body Worn Feasibility Committee that BWCs could be part of the solution to policing problems in Madison, but that adopting BWCs should not be done in the absence of making bigger fixes." President Obama supported and funded BWCs.

I encourage people to reach out to our local community leaders who have been advocating for body-cams and have been doing the work of social justice for the marginalized community.

It's a shame that other municipalities around Madison have Body Cams for their officers but a community as diverse as Madison does not. It has come to my attention that false information about body-cams has been distributed door-to-door on the Northside. These misleading flyers say Body Cams are going to further criminalize the marginalized community and will only be used for surveillance. That is simply not true. It is unfortunate that some individuals seek to replace facts with fear and resort to misinformation in order to advance their agenda.

No one has said that BWCs are in-and-of-themselves the solution to curbing police misconduct or the key to police reform. No one is suggesting that once we fund and implement BWCs that we do not need to make any other changes in order to improve policing. BWCs are just that: one tool that has proven its value in our on-going, large-scale and urgent efforts to improve policing. BWCs should be implemented in concert with other reforms which Madison is undertaking including the Police Civilian Oversight Board and the Office of the Independent Monitor, with power to conduct its own independent investigations and subpoena documents.

There are shootings that have happened in just the last three months where people wish there was  body-cam footage to account for what has happened for transparency reasons. On February 9, Quadren Wilson was shot 5 times on American Parkway. A second incident occurred on January 11 on Northport Dr and Dryden. Police allege that an armed suspect  jumped off of a balcony and began firing at police. The DOJ states that police fired back at the suspect. Suspect was injured and taken to hospital.

Please watch this series of videos of Body Cam footage of officers who have been brought to justice after Body-worn camera footage was released to understand why it is important that we have body-cams: https://www.youtube.com/watch?v=V-_ybqlJKlk

Historically many minority communities have grown to distrust police and for some very good reasons. Having body cams will be a big step in rebuilding that trust so that citizens can believe that they will be treated fairly. Body worn cameras will provide a greater level of transparency and a stronger protection of the inalienable rights that we all possess.

We cannot believe what we do not see especially, in the state with some of the largest racial disparities. We have to start now, to take positive steps so that we are not just raising another generation of black and brown kids who do not trust the police. 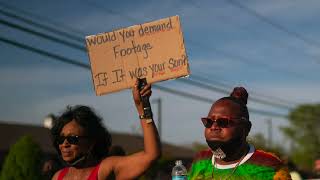