City of Madison Water Utility Well 14, which supplies water to the University Ave corridor and Spring Harbor neighborhood, continues to show a dramatic rise in sodium and chloride levels. Nearly tripling over the last twenty years, concentrations of both ions have steadily increased, and it is projected that water pumped from the well will soon exceed EPA recommended guidelines. Road salt applications are likely a significant contributor to the elevated sodium and chloride levels pumped at this well.

For every budget since I've become Alder, I've advocated for investigation and mitigation funds. The Utility continues to do investigation work and is closer to a mitigation path. At the Finance Committee last month, I was able to successfully amend the 2023 Capital Budget to move the mitigation project from 2024 to 2023. During discussion on this amendment, the Water Utility committed to getting this work done in 2023.

At tomorrow's Council meeting, I will be introducing a budget amendment for this year's budget to continue work on Well 14. You can read a memo from the Water Utility here. 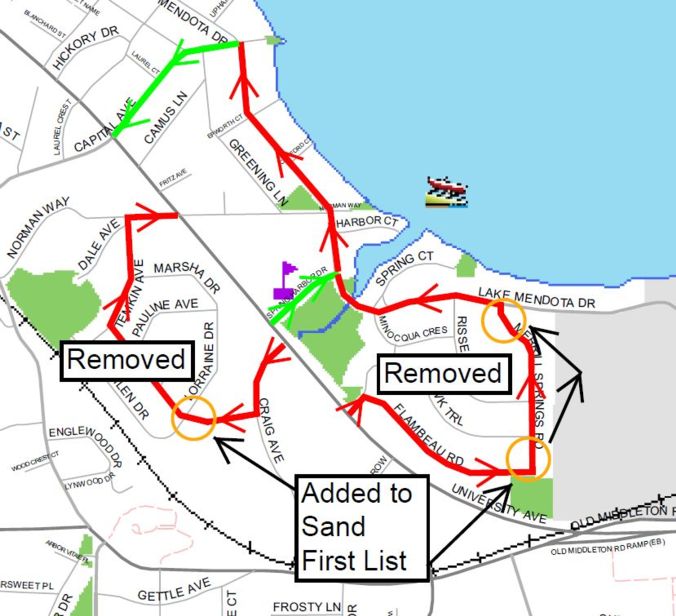 I'm incredibly excited to announce a long overdue change to the salt route for the Lake Mendota Drive area. This will help decrease salt that enters Well 14.

The map above shows areas in RED that used to be part of the City's salt route but will no longer be part of the salt route network. Instead, they will be treated like other residential streets where they are only plowed when there are three or more inches of snow on the roads and the storm is at or near its end.  They are likely to be covered with a hard pack of snow throughout the winter as a result.

The Streets Division will also be adding three areas to what they call the "sand first" list where instead of salt, they will spread sand on top of the snowpack to help with traffic. The sand first trucks are routinely dispatched at the same time as the trucks that are spreading salt.  They focus on the hills, curves, and intersections that do not meet the salt route requirement, but they could use the sand to help with traction.

The areas in ORANGE CIRCLES will receive the sand first treatment explained above.

This change has been a long time coming. The roads in RED are not used by Metro Transit, which is a big reason for inclusion on a salt route. Based on the high chloride levels in Well 14, it makes sense to cut back the City's usage.