Cress Funeral Home at 6021 University Avenue is proposing to add about 1300 square feet to their existing 14,000 square foot building.

Here is a summary provided by the architect.

The proposed remodel / addition would be to Cress Funeral & Cremation Service's existing facility located at 6021 University Ave. The site is presently occupied by a single story funeral home with a partially exposed basement and a gross floor area of 14,052 sq ft. The existing building was constructed in the early 1970's and features a style indicative of the era.


The proposed addition will add approximately 1,297 sq ft of gross floor area to the existing structure and will only moderately impact the buildings existing footprint. Some of the gross square foot addition will come from the expansion of the reception center above the existing flat roof garage. This expansion will maintain the integrity of the original architecture while offering a refreshed look though the use of new materials, such as cultured stone, which will be repeated throughout the façade and efis on the top of the tower. A new mechanical tower will enhance the buildings most visible facade by breaking up the existing low sloped roof line and adding an appropriate amount of height to the structure. The two existing porte-cochères on the north and west side of the building will be enclosed to add an additional stateroom and enclosed receiving garage as well. A new entrance canopy on the south facade will offer patrons a covered entrance to the facility.

Additional landscape screening around the sites southern perimeter will help establish a buffer between the funeral home and the existing residences. A new site entrance/exit on the west side of the site is proposed to help traffic flow onto University Ave. Exiting traffic would egress onto University Ave via stop light located at an extension of Magnus Swenson Drive. The proposed stoplight would aid traffic flow from both Cress Funeral & Cremation Service and Ashbury Church onto University Ave.

At this time I am not planning to organize a neighborhood meeting about the project, but will be glad to do so if there is interest. A public hearing on the proposal will be held at the Urban Design Commission on April 4. Detailed plans are available here.

University Crossing is a new development at the corner of University Avenue and Whitney Way. The project will redevelop the 14 acre former headquarters of Erdman & Associates. Krupp Construction is the developer. (The PSC building on Whitney Way is owned separately and is not part of the project.)

The developer is currently designing Phase 2 of the project, which will consist of

Phase 2 approval requires a new SIP for buildings 4 and 6. At the same time, the developer is seeking a GDP amendment for building 5, which is currently approved as a six-story hotel in the SE corner of the site along Whitney Way. The amendment would give them flexibility to potentially change building 5 to a four-story mixed-use building instead of the hotel. (Building 5 is not part of phase 2 and will require a separate SIP.)

If approved, construction of phase 2 would begin in June, 2012 and last about a year.

The general development plan (GDP) was approved by the city on Oct. 5, 2011. As its name implies, the GDP is the master plan for the site, and describes where buildings, streets, sidewalks, parking and bike paths will be, the intended use of the buildings, and other general features of the project. The GDP does not give permission to actually build anything; that comes in the Specific Implementation Plan (SIP). 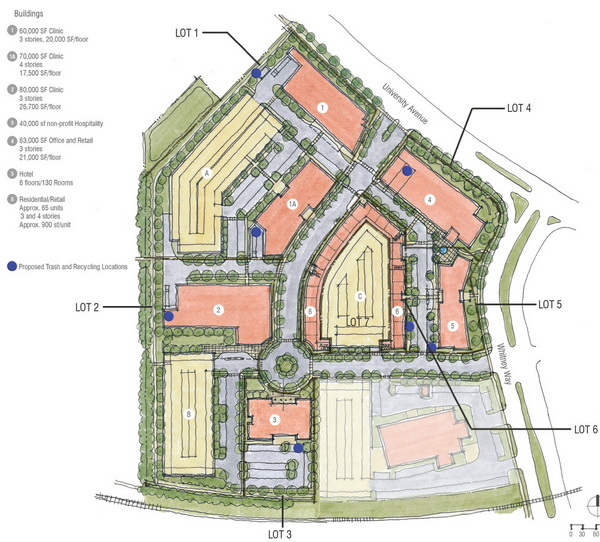 At the same time that the GDP was approved, the city also approved an SIP for Phase 1, which consists of a 60,000 square-foot digestive health clinic for UW Hospital and a temporary surface parking lot. Also included in Phase 1 is the basic infrastructure for the entire development, such as a bioretention pond and interior streets.

The city has created a TIF district to help finance the project, spur economic development and provide for public infrastructure.