Updates & Week of Dec. 28 Meetings of Interest for District 2


Special Note: Due to a State law, alders running for reelection in the April 2021 election are forbidden from using city resources to communicate with constituents using mass emails and posts. For that reason, I am sending this update from my personal email and via non-city social media. Until this interpretation of the law changes or I am re-elected, I'll be sending mass communications via these means. Please continue to use district2@cityofmadison.com to contact me with input and questions on city issues.
____________________________ 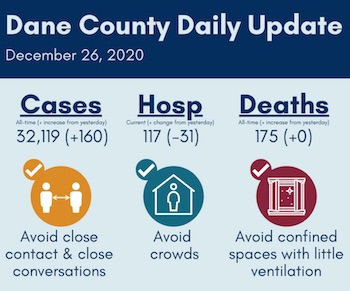 Stay Updated on COVID-19 Vaccines
Public Health has launched a new COVID-19 vaccine webpage that outlines the authorization process and prioritization as rollout of vaccines begins. Even though a COVID-19 vaccine is approved, there will not be enough doses right away to vaccinate everyone. Stay tuned to the COVID-19 vaccine webpage and sign up for blog updates to stay informed on availability. Take a look at the latest update and subscribe here.
Free COVID-19 Testing to Continue at Alliant Energy Center for at Least Three More Months

Due Date Extended to June 30, 2021 for License Renewals
Dane County, Second Harvest Extend Emergency Food Pandemic Response Program to July, 2021
City of Madison Announces New Healthy Community Food Systems Fund
Free hotline to be connected with a "Financial Navigator".
COVID-19 Recovery Dashboard that tracks Madison's long-term community and economic recovery from COVID-19.
Read about the temporary halt in residential evictions from the Tenant Resource Center: Note this ends on Dec. 31!
For information on Madison's responses visit the City's Coronavirus Website. There you will find links to City Service Updates, Resources for Businesses.
From MMSD: Neighborhood Food Sites and from Community Action Coalition: Dane County Food Pantry Network
From the City: Community Resources Section on the city's COVID website, including housing and eviction information
WI Dept. of Health Services Cases by Neighborhood (Census Tract)
The Governor's Office compilation of all COVID-19 resources and information from state agencies, including the State Dept. Public Health
From the Downtown Madison Business Improvement District: Updates From Downtown Businesses
Info on UW-Madison's response to the pandemic at this site
____________________________
3. OTHER DISTRICT 2 UPDATES

The Streets Division encourages residents to contact them directly for questions, complaints, or problems with snow-related issues. This is the fastest way to get these issues addressed. The best choice is the snow removal Report a Problem form. All of their field supervisors receive, prioritize, and address these as quickly as they can.

Residents can also call the Streets Division office that services their home. For areas east of South Park Street, including all of District 2,m call 608-246-4532. According to Streets, when their plows are out, someone is staffing their phones.

And any resident who wants to know more about the snow plow operations can sign up to receive Snow Plow Alerts where they explain their operations each time their plows go out.

E. Gorham Resurfacing Project at Board of Public Works on Jan. 6

The Gorham St. 2021 resurfacing project will be considered by the Board of Public Works on Jan. 6, 2021. I will post participation details in next weekend's Alder Update, but the meeting agenda is usually available by Friday afternoon prior to the meeting. Please note that Gorham St. is included as part of a more general contract for resurfacing projects throughout the City, so please review the BPW agenda for the resurfacing item when registering if you plan to speak or give input at the meeting. Comments can also be emailed to boardofpublicworks@cityofmadison.com.

The project team has made several updates to the project plan based on input received at the informational meeting, through emails, and from the Transportation Commission.  A summary of the project details and an update plan can be found in the project overview section here. At that project webpage you can also sign up to receive future email updates.

The most remarked upon aspect of this resurfacing between N. Baldwin and N. Butler Streets is the plan to put in a bike lane between N. Baldwin and N. Brearly. The street is particularly narrow between Few and Brearly, so Engineering and Traffic Engineering are proposing changing street parking there to accommodate the bike lane. See the Project Plans on the website for the latest version. From what I see, the number of street parking spaces available on the 1100 block of Gorham will be the same, although moved to the opposite side of the street. On the 1000 block, there will be fewer spaces but Engineering plans to add 5 spaces just to west of Brearly to make up for that loss.

Engineering's approach has been to minimize the loss of canopy trees, hence moving some spots to the other side of Gorham where power lines have already prevented the replacement of canopy trees as they die or have been compromised. On the 1000 block, the parking spaces that will be on the north side of the street will require removing some small trees, but larger trees will be saved by moving 5 stalls west of Brearly. Engineering arrived at that part of the solution just last week and I now believe that the need for bike network connectivity is important enough to give up the smaller trees that will be removed. In the 1000 block, it may be that some who currently have parking stalls closer to their residences will have to park on the other side of Brearly, but the benefits seem to outweigh those costs. Note that no assessments to property owners are anticipated for these changes to parking areas nor for the street resurfacing.

Many enhancements are also planned related to traffic calming and pedestrian/bike safety. New sidewalk bumpouts that will shorten pedestrian crossing distances are planned wherever possible. Bumpouts also have been shown to slow vehicular traffic as the street narrows at these intersections. Continental crosswalks that are move visible and also have been shown to slow traffic will be painted on at least one side of almost all unsignalized intersections. A Rectangular Rapid Flashing Beacon will be installed at N. Blair and Gorham for pedestrians crossing to/from James Madison Park.

It is true that speeding and rude driving on E. Gorham will not be eliminated by these changes and that biking on E. Gorham will still not feel safe to all, but these improvements should help. We will all need to work together to explore future solutions that are both economically possible and equitable.