A set of ordinance changes related to zoning was recently submitted by the Mayor, Alders Lemmer, Furman, and Evers and me. The overall goal of these changes is to align our housing types and housing densities with the City's 2018 Comprehensive Plan. As you may recall, the Comprehensive Plan was informed by the Imagine Madison process that had a robust public engagement component.

In several current zoning districts, the allowable densities of dwelling units fall below those recommended in the Comprehensive Plan. Some of the changes you will see below will promote those target densities in a few zoning districts.

Another motivation that flows from the Comprehensive Plan and Madison's tight housing market is the need to address what is sometimes called the "Missing Middle" - small and medium-scale housing that tends to be more affordable. In many neighborhoods our current zoning code, the economics of construction and land prices, and the priorities of the development community often result in a focus on either single-family dwellings or much larger apartment/condo buildings. This leaves many residents without reasonable choices for housing and does not take advantage of the densities that the community has expressed support for in the Comprehensive Plan.

I believe the proposed changes are appropriate because they can:

I will summarize the proposed changes, but first let's get oriented.

Which Zoning Districts Will Be Impacted?

There are six zoning districts in Aldermanic District 2, and a total of fourteen citywide, that will change should the new regulations be enacted.

Isthmus area zoning districts are shown in the map below, including these six impacted in District 2. There is slightly higher resolution version here, but expanding the image in your app or browser works well. Note District 2 is generally the area on the Lake Mendota side of E. Washington. 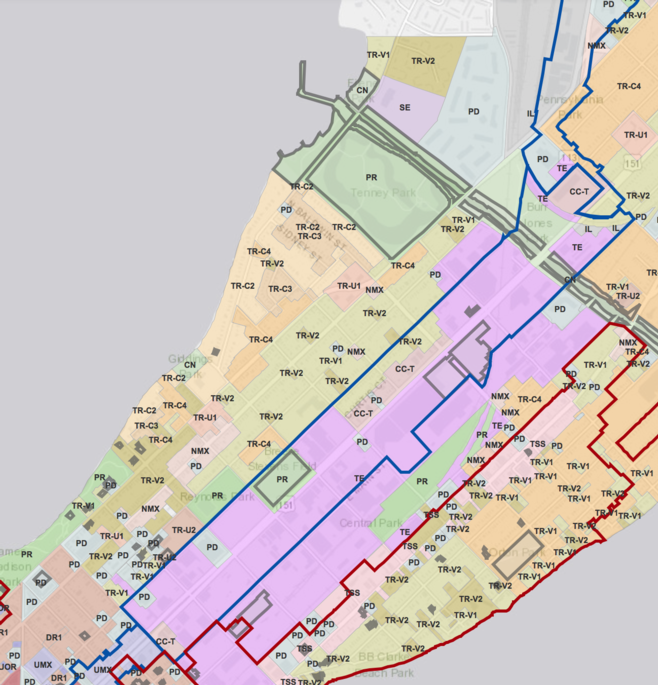 The boundaries of Urban Design District 8 (blue) are also shown as is the Third Lake Ridge Local Historic District (red) in Alder Rummel's District. Areas and buildings that are grey or outlined in grey, such as Tenney Park and the building that houses Pasqual's on E. Washington, are Local Landmarks. The large light purple area is zoned Traditional Employment, a zoning district that is not impacted by the proposed changes.

All points west of N. Blair Street in District 2 would not be impacted, including all of James Madison Park Neighborhood, Mansion Hill Neighborhood, and the Langdon Street area. None of Aldermanic District 4 represented by Mike Verveer would be impacted.

Another way to look at the same data is to show each individual parcel that is impacted and its zoning district. In the map version below, only the six impacted zoning districts that are listed above are colored in. Parks spaces are colored in green. A higher resolution version of this map is also available, but again, expanding the image in your app or browser works well. 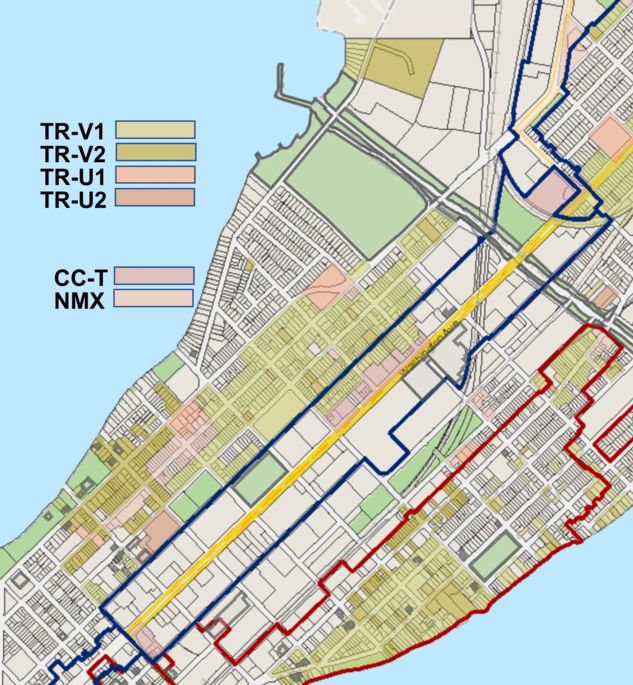 Many of the changes proposed will be imperceptible, but there are a few items that could be noticeable and a few that could reduce opportunities for residents to weigh in on proposed developments (more on that later). The orange table below shows two of the most familiar aspects of zoning code that are proposed for some changes. 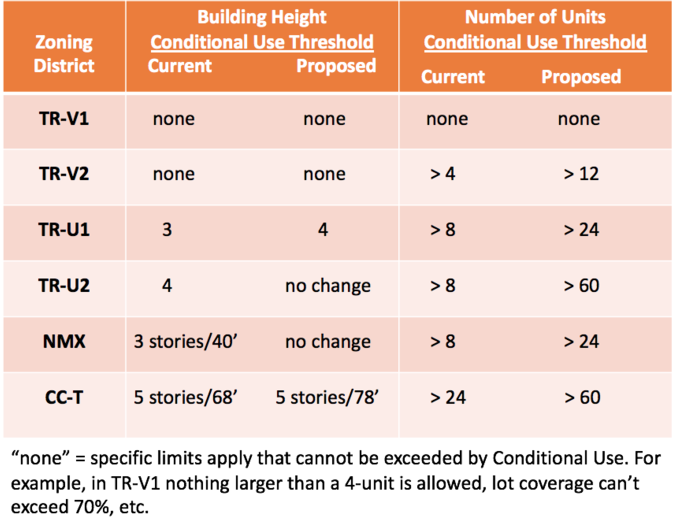 As you see, thresholds for both Building Height and Number of Dwelling Units would change for some District 2 zoning districts. These thresholds help to determine when a proposed development is allowable "by right" or when it requires a Conditional Use Permit granted by Plan Commission. For example, if a proposed development under the new regulations is in the TR-U1 zoning district, it could possibly be built without Plan Commission consideration if the development has 24 dwelling units or less and is a maximum of 4 stories tall. If you look at the maps above, TR-U1 parcels already have large multi-family buildings on them, so the impact in terms of massing would be small.

Note that just because a proposed development in TR-U1 might not require Plan Commission approval if it is 4 stories and 24 units, there are still other reasons that it might not "fit" onto the parcel or otherwise be allowed by right. An example of why 24 units may not be allowed in TR-U1 can be illustrated by looking at the green table below. 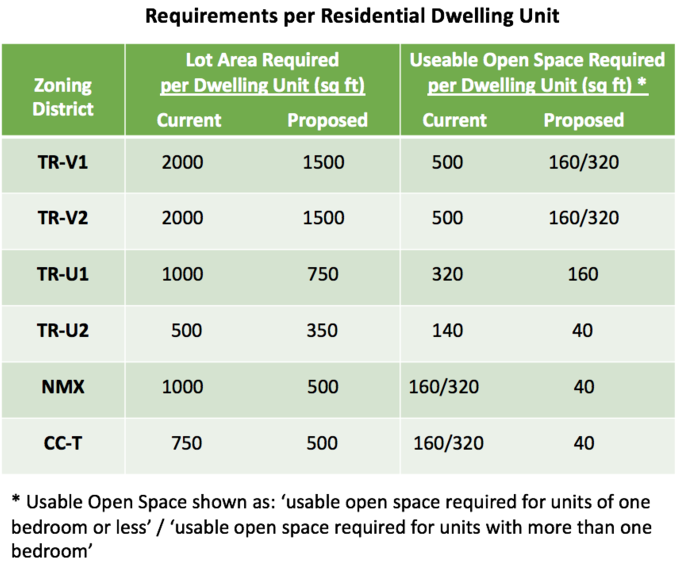 For the hypothetical development mentioned above in TR-U1 with 24 apartments, per the green table a parcel would need to have 750 sq. ft. of lot area per dwelling unit, i.e., 24 units x 750 sq. ft. = 18,000 sq. ft. That's is a big lot for E. Johnson. For the two TR-U1 parcels on the 600 block of E. Johnson, both of which currently have 12-unit apartment buildings, the lots are about 13,000 sq. ft. each, so the maximum number of apartments per the Lot Area Required per Dwelling Unit would be 13,000/750 = 17 dwelling units. So, a proposed redevelopment of either of those parcels would need to stay under 18 units. This seems appropriate because it would allow more density "by right", but not too much.

For the TR-V1 area that includes many more parcels than TR-U1, the green table tells us that the new requirement would be 1500 sq. ft. lot area per dwelling unit. A typical TR-V1 lot in District 2 averages about 5000 sq. ft. So, the proposed 1500 sq. ft. Lot Area Required per Dwelling Unit would limit those lots to 3 dwelling units each (3 units x 1500 sq. ft. = 4500 sq. ft.). Currently, 2000 sq ft is required per unit (aka apartment), so a parcel of 5,000 sq ft. is limited to two apartments. This increase in allowable number of apartments does not seem problematic to me. Note that the requirements in the green table can't be exceeded by getting a Conditional Use Permit approved by Plan Commission - they are set in stone.

Other regulations that will not change will also continue to limit the footprint of a proposed development. For instance, in TR-V1, TR-V2, TR-U1, and TR-U2, a building will still only be able to cover 70% to 90% of a parcel. In NMX the lot coverage can't exceed 75% with 85% in CC-T.

How Could Neighborhood Input Change?

Residents often give feedback on proposed developments through their neighborhood associations or as individuals at Plan Commission meetings, or to their alder. In a few circumstances, some of those opportunities to weigh in on a development proposal may decrease because the thresholds for requiring a Conditional Use Permit will be relaxed, but I believe that other safeguards, city processes, and community engagement will be retained when needed. For instance, in the circumstances when a Conditional Use Permit is no longer required, there could still be opportunities for public input, including these possibilities:

Additionally, all city agencies would still review proposals to make sure they meet code, regulations, etc., including the Fire Department, Engineering, Forestry, Traffic Engineering, and so on.

Note too that Neighborhood Plans and Special Area Plans would still be in effect.

I have reviewed recent District 2 development proposals in the zoning districts proposed for change and see none whose opportunities for input would have been shortchanged. For instance, if these proposed changes had been enacted several years ago, the two newer apartment buildings in the 700 block of E. Johnson would still have needed to go to Plan Commission due to their number of units, zoning district changes, and/or demolition permits.

The blue table below shows additional proposed changes for the two mixed-use zoning districts in District 2.

These changes would potentially impact the E. Johnson St. business corridor and the section of E. Washington between N. Ingersoll and N. Baldwin. Mostly, they reduce the requirements for commercial space in new mixed-use buildings in an attempt to reduce the amount of empty retail/commercial space we see in so many new buildings and instead make some of that space available for more housing units. Note that 3 stories would still be the height limit along E. Johnson Street (orange table) in the NMX district. Along the E. Washington CC-T area, heights are limited not to the 5 stories in the orange table, but to 3 stories by the Urban Design District 8 regulations, which override zoning district regulations.

These proposed changes are expected to be considered by the city's Housing Strategy Committee on Feb. 25 and by Plan Commission on March 8. If they are approved, they would then go to Common Council. I will be sure to publicize participation options for those meetings in my weekly Alder Update. As always, you are welcome to email me with your thoughts and questions (district2@cityofmadison.com). I am also willing to share more information and slides with you or a group in a virtual meeting.