Updates & Week of July 18 Meetings of Interest for District 2 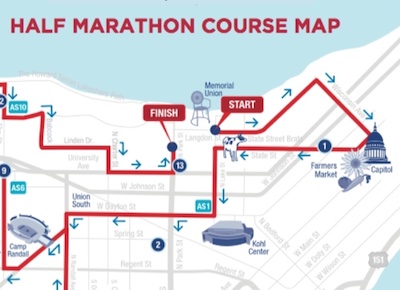 The Annual Madison Mini-Marathon and 5K Race will impact downtown streets on Saturday, July 23 with setup for the race impacting some streets on Friday, July 22. The primary impact in District 2 will be the first part of the Mini-Marathon course early on Saturday morning. The Mini-Marathon course starts at the corner of Lake Street and Langdon Street at 7:00am when runners will proceed up Langdon to Wisconsin Avenue, run down Wisconsin to East Mifflin Street (the square), and then down the length of State Street to Lake St again where they will turn south until taking West Dayton outbound. A portion of the route is shown in the map above, but more details and full course maps can be found here.

The accompanying 5K race course will be on N. Park Street and to the west, so will not impact District 2. Similarly, the remainder of the Mini-Marathon will be to the west of District 2, also finishing on N. Park Street at its intersection with the west end of Library Mall. The Mini-Marathon and 5K will also impact bus routes until 11am on July 23. - Routes 2, 4, 5, 6, 7, 8 and 13 will detour for the races - details on the bus detours here.

For more information on the races, email raceday@racedayevents.com. 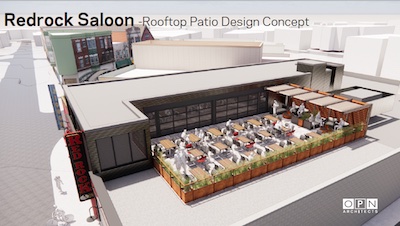 This past week the Plan Commission granted a Conditional Use Permit (CUP) that was required for Red Rock Saloon's proposed 2nd floor rooftop terrace at 222 W. Gorham Street. A CUP was necessary to approve an outdoor eating area and Supplemental Regulations also required approval for an outdoor eating area closing later than 9pm in the Downtown Core District. Materials for the Plan Commission's consideration can be found here.

While the terrace's required CUPs were approved by Plan Commission, the Alcohol License Review Committee will at some point in the future consider Red Rock Saloon's expected request for an extension of premises, which would allow alcoholic beverages to be consumed on the new terrace once it is constructed. At Plan Commission the applicants informally agreed to present a management and security plan to the ALRC when their application is considered, although that is not expected until later this fall.

Also at Plan Commission, Red Rock agreed to Conditions of Approval that would require shutting the two garage doors to the terrace at midnight each night to reduce noise; to require patrons to be off the terrace no later than 1:30am; to the installation of an additional sound-dampening solid barrier behind a rock wall on the rear of the terrace, and to not allowing the two standard doors to be propped open. Also, there will be no amplified on the terrace and no outdoor bar. 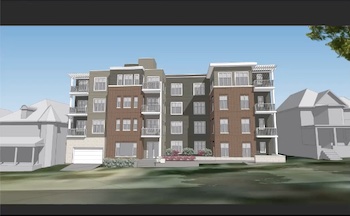 The James Madison Park District of Capitol Neighborhoods, Inc. (CNI) is forming a neighborhood steering committee to further evaluate a proposal. The developers, Reese Fisher and Blake Fisher, propose to demolish the three existing apartment houses that are currently located on these properties; one lot is vacant. They also propose a new four-story building with 32 market rate apartments comprised of studios, 1-bedroom, and 2-bedroom units that will include a rear roof terrace as a resident amenity space. A below grade level will provide 24 parking spaces for vehicles, 3 spaces for mopeds, and 35 spaces for bicycles. The developers have not yet filed a land use application with the city.

Please email me if you have input or would like to serve on the neighborhood steering committee that will be forming this month. You can watch a recording of the July 7 neighborhood meeting on the proposal here.

The developers propose to convert the four existing properties into a single lot and seeks a rezoning from Downtown Residential 1 to Downtown Residential 2. One consequence of this proposed rezoning would be that the building's width would have no maximum, unlike the current DR1 zoning's maximum width of 60 feet. The rezoning will need approval by the Plan Commission and Common Council with the requested Conditional Uses needing only Plan Commission approval.

Capitol Neighborhoods, Inc. invites CNI members and their guests to CNI's Annual Meeting 2022, featuring Stacie Reese, Madison's Sustainability Coordinator. Stacie will provide a presentation on the City of Madison's sustainability goals and how residents can support city-wide efforts. Light refreshments will be provided.

Below are some pertinent agenda items from city committees that are meeting this week. If you click on meeting "Details" below, you will find participation and viewing options, and a link to the full meeting agenda. If you click on an item from within an agenda, you will see all documents that relate to that item.
I appreciate hearing from you on any agenda items on which you have a particular interest or concern.
___________________________
Transportation Policy and Planning Board: Details
5:00pm, Monday, July 18, 2022
Agenda Item 3
Director's Report
Agenda Item 4
Speed Policy on Shared Use Paths
Agenda Item 6
Authorizing the Planning Division's shift to a Planning Framework with 13 higher level Area Plans to be updated every 10 years