Updates & Week of Sept. 26 Meetings of Interest for District 2 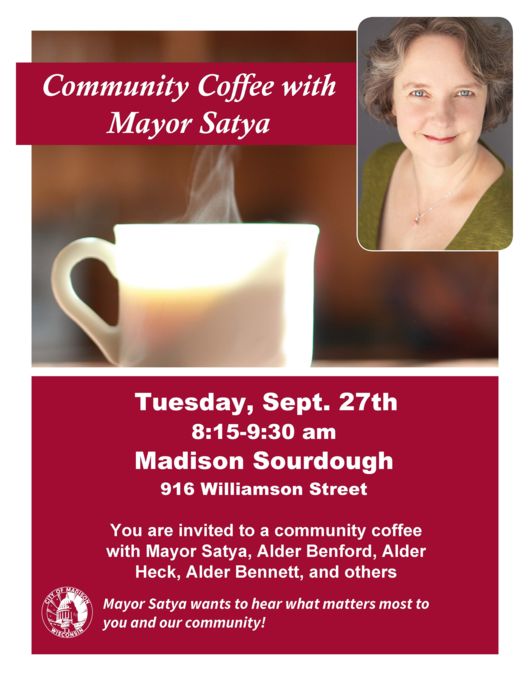 There are currently five active redevelopment projects in District 2. Brief updates on all follow, but I will continue to post updates about each proposal as they work their way through neighborhood and city processes. If you have any questions or input, please contact me at district2@cityofmadison.com.

The City continues to negotiate with Mortenson Development and other stakeholders concerning this large redevelopment proposal. Mortenson has been chosen by the City as the developer of the student-focused apartments proposed for above a new city-owned parking garage that will include a new intercity bus terminal. The existing parking garage along Lake Street will be demolished and replaced while the garage section to the east of Hawthorne Court will remain. Mortenson is proposing some beds of the approximately 700 total beds with reduced rents, but the amount of those reductions and the number of affected beds is still under negotiation with the city.

The Campus Area Neighborhood Association has formed a neighborhood steering committee to further evaluate the proposal. All are welcome to participate and CANA suggests signing up via this form. Getting on the committee's email list via that form is a great way to stay informed about the project even if you can't attend all or any of the meetings.

There have been various other public input/informational opportunities and others are expected as this proposal gets closer to starting the formal city approval process this fall. Many city entities will eventually need to approve various aspects of the proposal, including the Finance Committee, Common Council, the Landmarks Commission, the Urban Design Commission, and Plan Commission.

This proposal by developers Reese Fisher and Blake Fisher is expected to be at Plan Commission on Oct. 24. The developers seek to demolish three existing apartment houses and combine those lots with another lot that is vacant in order to construct a new four-story building with 32 market rate apartments comprised of studios, 1-bedroom, and 2-bedroom units. The Downtown Residential-1 Zoning District in which this site is located allows a maximum building width of 60 feet, while the proposed width of the new building is approximately 100', hence the developers are asking for a rezoning to Downtown Residential-2 that does not limit building width. They also will need a Demolition Permit, Conditional Use Permit and Certified Survey Map approval.

The James Madison Park District of CNI has met once with the development team to discuss the proposal. I anticipate that they will meet again to form their feedback/input to the Plan Commission. I will publish more details on Plan Commission's upcoming consideration as we get closer to October 24.

The neighborhood steering committee from the James Madison Park District of Capitol Neighborhoods, Inc., met this past week to receive an update from the development team for this site at 322 E. Washington Ave. St. John's proposes to demolish their current building; construct worship and social service/community spaces on the first floor of a new building with 9 stories of mostly affordable and workforce apartments above, and underground parking below.

The development team, which includes Mark Binkowski and Brad Binkowski (both of ULI), Potter Lawson (architects), and St. John's, indicated that if the proposal is approved, they do not plan to break ground until late summer of 2023. They plan to file their demolition and land use applications on Sept. 26, so they will start going through city approval processes this fall. They also will be competing for City Affordable Housing Funds and WHEDA tax credits to provide financing for building the affordable units.

I anticipate that the steering committee will continue to work with the development team on design, potential traffic impacts on the E. Mifflin Bike Boulevard, impacts on adjacent structures, etc.

668 State LLC is seeking approvals to construct a four-story addition atop the existing two-story commercial building at 668 State St. The proposed addition will contain 24 student-oriented apartments on floors 3-6 with floors 5 and 6 set back approximately 30' from the front façade. The existing commercial space on the two lower floors and in a finished basement will largely remain. No automobile parking is proposed; parking for 26 bicycles will be provided.

The Campus Area Neighborhood Association is forming a neighborhood steering committee to further evaluate the proposal. To sign up for that committee, please complete this google form. If you have questions, thoughts, or input on this proposal, I encourage you to sign up for the CANA committee so you can stay informed as the development proposal goes through the city approval process.

Note that this proposal was submitted in 2017 and was fully approved, but the project did not move forward at that time. The property owner is submitting the same project as was approved in 2017. They anticipate submitting their city applications this fall and the project will require approvals from the Urban Design Commission and Plan Commission.

This proposal by developer Kaba Baal LLC has been on pause since shortly after a May 2 neighborhood meeting. The developer is seeking City of Madison Forward Housing Rental funds that, if awarded, and other financing secured, could require most or all residents to have 60% of Dane County Median Income or less with rental rates reduced appropriately. Because the Forward Housing Rental awards are competitive and because the competition is stiff, the City has not awarded all of the funds for 2022 as they wait to judge the feasibility and chances of success of the remaining applicants. I anticipate that we should hear soon about possible paths forward for this proposal.

As presented in May, the building would be a mixture of studios, 1-bedroom, and 2-bedroom units in a new 4-story residential building with 32 to 48 apartments with parking underneath. The developer would need a Demolition Permit for four buildings (301 & 305 E. Johnson and 145 & 149 N. Butler), as well as likely Plan Commission approval of Conditional Uses, a Certified Survey Map, and any requested zoning changes.

Urban Design Commissioners raised concerns mostly about the proposal's impact on the adjacent Lisa Link Peace Park, the height and massing of the building's front facade, and establishing the precedent of replacing State Street buildings. If the UDC eventually does make a recommendation, Plan Commission will consider the Demolition Permit Application and requested Conditional Uses.

A steering committee of the Mansion Hill District of Capitol Neighborhoods,  Inc. (CNI) has evaluated the proposal and did submit a report to UDC, but I anticipate that the delay and any changes could result in some modifications to the steering committee report.

Note that the Capital Budget provides funding for the City's major construction projects including building new facilities, improving our transit system, maintaining our roads and parks, and purchasing major equipment.

The Operating Budget provides money for running city departments and services. It pays for the day-to-day spending on employees, materials, and supplies. You can find a wealth of information on both the Capital and Operating Budgets at the Finance Department's budget website.

Dane CORE - for rental and utility assistance. Dane County and the City of Madison were notified this week that our requests for additional emergency rental assistance funds have been approved. That means more federal funds will soon be available to continue the Dane CORE 2.0 program. The Dane CORE 2.0 application portal, which temporarily closed on Sept. 15, will re-open at 12:00 am CST on Wednesday, Oct. 5 for persons interested in submitting new applications and additional funding requests (AFR's).

Applications received prior to the Sept. 15 pause will continue to be processed without interruption and eligible claims will be paid. Anyone wishing to review the status of an application that has already been submitted to see if there are any open tasks and that all information is up to date should log into Neighborly.

Free COVID Tests at Home - It's still possible to get free at-home COVID tests mailed to you. Take a look here.

Below are some pertinent agenda items from city committees that are meeting this week. If you click on meeting "Details" below, you will find participation and viewing options, and a link to the full meeting agenda. If you click on an item from within an agenda, you will see all documents that relate to that item.
I appreciate hearing from you on any agenda items on which you have a particular interest or concern.
___________________________
Committee on Aging: Details
2:30pm, Wednesday, Sept. 28, 2022
PRESENTATIONS
Agenda Item 3
Property Tax Assistance for Older Adults
Agenda Item 4
NewBridge Services for Older Adults
REPORTS
Agenda Item 5
MSC Report Highlights
___________________________
Finance Committee: Details
4:30pm, Wednesday, Sept. 28, 2022
CONSENT AGENDA
Agenda Item 1
PUBLIC COMMENT
REGULAR FINANCE COMMITTEE AGENDA
Agenda Item 18
Amending the 2022 Operating Budget to Increase Staff for Public Health Madison and Dane County to Expand Sexual and Reproductive Health Services
Agenda Item 21
Approving the selection of Porchlight, Inc. as the operator of a new facility, to be constructed by the City, to provide emergency shelter and supportive services primarily to male-identifying persons in Madison and Dane County that experience homelessness, and to authorize the Mayor and City Clerk to enter into any agreements and contracts with Porchlight, Inc. necessary to fulfill that purpose.
Agenda Item 22
Approving the provision of up to $62,000 from the United States Department of Justice (USDOJ) Byrne Criminal Justice Innovation (BCJI) grant Isthmus Safety Initiative (ISI) to support the development and execution of a Isthmus Safety Initiative (ISI) program in Madison's Downtown and authorizing the Mayor and the City Clerk to enter into agreements with the selected agency to implement the designated project.
Agenda Item 30
Adopting and confirming the Labor Agreement between the City of Madison and the Madison Professional Police Officer Association (MPPOA) for the period January 1, 2022 through December 31, 2025.y Clerk to enter into any agreements and contracts with Porchlight, Inc. necessary to fulfill that purpose.
CAPITAL BUDGET DELIBERATIONS
Agenda Item 31
2023 Executive Capital Budget
Note: All materials for this item can be found here.
___________________________
Plan Commission: Details
5:00pm, Thursday, Sept. 29, 2022
SPECIAL MEETING OF THE PLAN COMMISSION
SPECIAL ITEM OF BUSINESS
Agenda Item 2
Presentation by the Capital Area Regional Plan Commission (CARPC) staff on the Regional Development Framework
Agenda Item 3
Staff presentation and discussion related to potential changes to the Zoning Code's Family Definition
___________________________