Today is the 18th anniversary of 9/11. We remember those who lost their lives, their families, and the brave, decisive actions of the first responders.

Parks staff will be holding a Public Input Meeting to discuss the Portland Park Master Plan. At this session, attendees will examine opportunities and constraints of the site, give input regarding their preferences and priorities for amenities to include in the park, and participate in a planning exercise related to park amenity planning.

The Rolling Meadows Neighborhood Association is looking for individuals in the neighborhood to join the Board of Directors. In this role, you will help plan events, keep the neighborhood informed, and make sure that everyone has a voice.

Kwik Trip's new proposed location at the corner of Sprecher and Cottage Grove Roads is going through the city approval process and will be at the Monday, Sept. 16 Plan Commission Meeting.

If you haven't done so already, please do send me your thoughts on the proposal. You can also feel free to send them to Colin Punt in City Planning for review at Plan Commission.

The developer received preliminary approval at the September 4 Urban Design Commission meeting, but also received some feedback that will impact the project, including concerns about some inconsistencies in the exteriors, questions related to the use of green space, and the need for more community engagement about the design aspects of the project. I'm gathering information on what this means for the design and for the project's next steps and will share more information when I have it.

The proposal is scheduled for the October 28 Plan Commission meeting.

5. Volunteer with Friends of McGinnis Park

They have regular volunteer work times at McGinnis Park, open to everyone interested in helping out:

They need help with planting, weeding and keeping the park clean.

Future plans for McGinnis Park include installation of a community garden, bat houses, and a donation of some art sculptures.

You can learn more by visiting the group's Facebook page, or by emailing friendsofmcginnispark@gmail.com.

Leadership opportunities within this newly-formed group are also available. Please email them for more details.

City staff have released an analysis of the draft United States Air Force F-35A Operational Beddown National Guard Environmental Impact Statement (EIS) pertaining to the 115 Fighter Wing at Truax Field and maps of the expected noise areas at or above the 65 decibel range.

You are welcome to contact me and other elected officials with your thoughts on the proposed stationing of F35s at Truax Field, but I also encourage you to submit comments via the Air National Guard's official public comment channels as this is a decision being made by the federal government, not the City of Madison. Those comments can be made through September 27 and can be made online or by mail.

The Air National Guard has scheduled a public open house on Thursday, September 12, from 5-8pm at the Alliant Energy Center, and comments can also be made in person there. A final decision will be made early next year.

Madison Water Utility wants to engage their customers to better understand which incentives would be most effective in increasing water use efficiency still further. MWU is working with the WaterNow Alliance, in partnership with the online polling platform POLCO , to maximize public engagement. Madison Water Utility is a 2019 recipient of a WaterNow Project Accelerator grant.

8. City of Madison seeks nominations for next Poet Laureate

Poets Laureates generously share their love of poetry with our city, create occasional poems for specific civic events, and they participate in and help sustain poetry programs for the City of Madison.

Madison boasts of having been one of the first cities in our nation to have a poet laureate. John Tuschen was appointed by Paul Soglin in 1977. Five poets have served following him including Andrea Musher, Fabu, Sarah Busse, Wendy Vardaman, and Oscar Mireles.

After completing four years of service as Madison Poet Laureate, Oscar Mireles will soon pass the torch. Before the end of the year, the Madison Arts Commission will review nominations and make a recommendation to the Mayor's Office. On January 20, 2020 a new Poet Laureate, appointed by Mayor Satya Rhodes-Conway, will begin their term.

Any poet that wishes to self-nominate or any organization or member of the community that wishes to nominate a poet for the position of Madison's next Poet Laureate may submit an application for consideration.

Poets Laureate are selected based on their involvement and commitment to the community, literary excellence and continued pursuit of the craft.

Deadline to apply is Friday, September 27

All Madison Public Library locations will be closed on Thursday, September 12, for a staff inservice.  Normal operating hours will resume on Friday, September 13.

Library customers may return library items in library book drops or use LINKcat to place holds, check library card records, or renew items. The library's databases and downloadable audiobooks and eBooks are also accessible 24/7 with a library card.

As of September 5, there are 34 confirmed cases of Wisconsin residents hospitalized for severe lung disease and damage from vaping. Nationally, over 200 possible cases are being investigated.

"I urge everyone that currently uses vaping devices to inhale THC or nicotine to stop immediately, and encourage others to not begin using these products," says Janel Heinrich, PHMDC's Health Officer. "Parents and educators can also help by talking with youth, since no amount of marijuana or nicotine use during adolescence is ever safe."

Anyone who has used vaping products and is experiencing unexplained shortness of breath, chest pain, cough, nausea, vomiting, fever, and weight loss should talk to a healthcare provider. 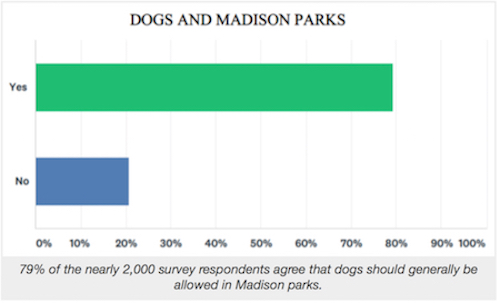 Madison Parks staff worked hard over the summer to collect public input on the current dogs in parks policy. Five public meetings were held along with an online survey. Based on those results, a draft policy was presented to the Parks Long Range Planning Subcommittee last week. The new policy would allow on-leash dogs in Madison parks except at playgrounds, splash parks, sports fields, groomed cross country ski trails, beaches, and conservation parks. The recommendation from the subcommittee will be forwarded on to the Board of Parks Commissioners for final approval.

Mayor Rhodes-Conway released her 2020 Capital Budget and Capital Improvement Plan last week. Budget materials can be found here. Amendments to the Mayor's Capital budget will be released on September 20 and considered by the Finance Committee on September 23. The Mayor's Operating Budget will be released on October 1 and follow a similar process with Common Council eventually considering all Capital and Operating Budget amendments in early November. As always, the public can attend city meetings and give public comment.