At the Transportation Commission meeting on Wednesday, Jan 25th, several traffic safety improvement programs that folks in the 3rd District have been interested in for a long time might be moving forward!

For projects starting in 2022, the Common Council and Mayor created a new Safe Streets Madison program, which consolidates funding from several previous programs into the new program and revamped the prioritization program. Under the Safe Streets Madison program, much more attention was paid towards using a data-driven and equitable approach to traffic safety, as well as eliminating burdensome proposal processes that made it harder for some neighborhoods to be considered for safety improvements. To be blunt, the program is partially designed to stop individual alders from being able to "out-advocate" other neighborhoods and to make sure that all parts of the City get safety improvements.

The first set of proposals were funded in 2022, however, there were still hundreds of really great potential projects to tackle that the City wasn't able to get to before it ran out of available funds to fund the highest scoring proposals.

Now that we're in a new budget year, I'm very thrilled that the first round of projects under the 2023 Safe Streets Madison program are coming up for a vote at the Transportation Commission. This is a little sooner than last year, because we want to get a jump on getting projects out to contractors - supply chain and labor shortages have made it difficult to find contractors to bid on jobs, and many projects that were approved in 2022 have had to roll over into 2023.

For the first round of 2023, there are 22 projects recommended for approval (plus 1 city-wide project that I'm setting aside.) Of those 22, four of them are at least in part in District 3. There is also one District 3 project that will be discussed, but may or may not be funded. There will be additional projects coming up for Safe Streets Madison later this spring.

The four projects recommended for funding:

1. Speed humps on Meadowlark Drive near Kennedy Elementary. This has been a long-standing request from neighbors, parents, and crossing guards in the area. Meadowlark has had a challenge with drivers zooming down it at high speeds, even in front of the school. The speed humps should help slow traffic down on the street. 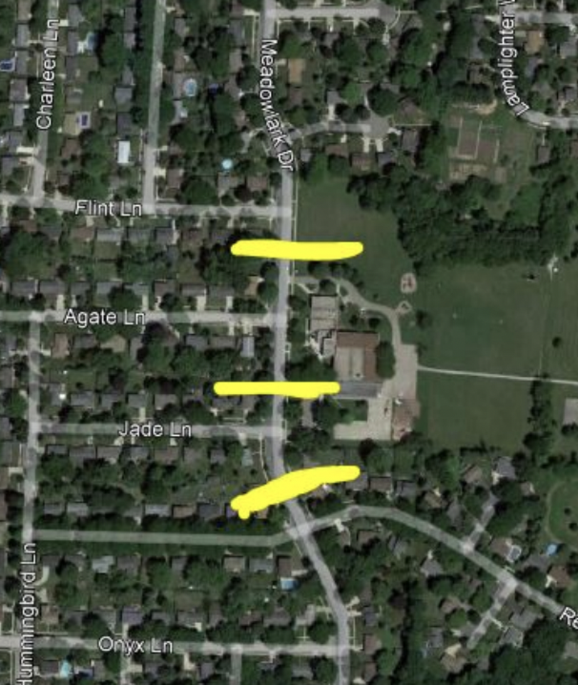 2. Cottage Grove Road and Acewood Intersection. This project is going to improve the traffic signals and pedestrian access at CGR and Acewood. The plan is to replace the signal poles and arms and add signal heads over each lane. We will also add left turn arrows for Cottage Grove Rd when turning onto Acewood. For pedestrians, we'll extend the island noses through the crosswalks on Cottage Grove Rd. 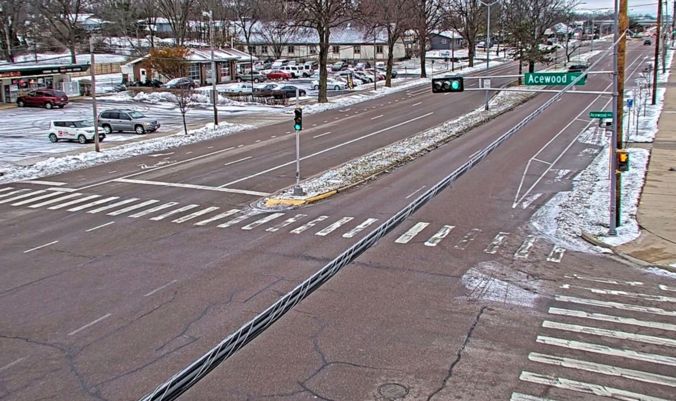 3. Milwaukee Street/Interstate Bridges Pedestrian and Bike improvements. This one is a big one. The Milwaukee Street bridges are terrible and are far too narrow and cars come too close to pedestrians. So, to start with, we're going to drop the speed limit on the bridges. We can also use the existing space in a bit safer manner by shifting some things around on the bridges, and putting pedestrian access on one side and shifting traffic over. This diagram might help: 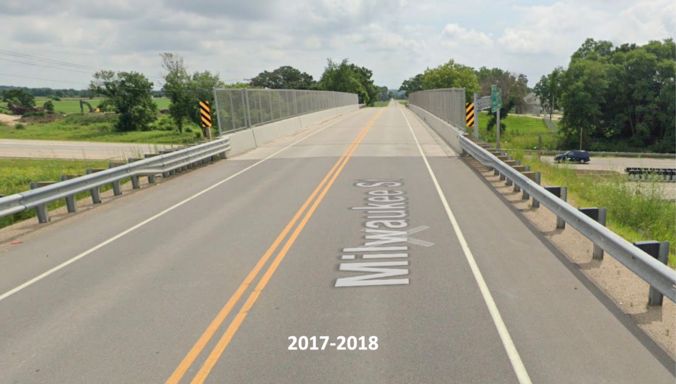 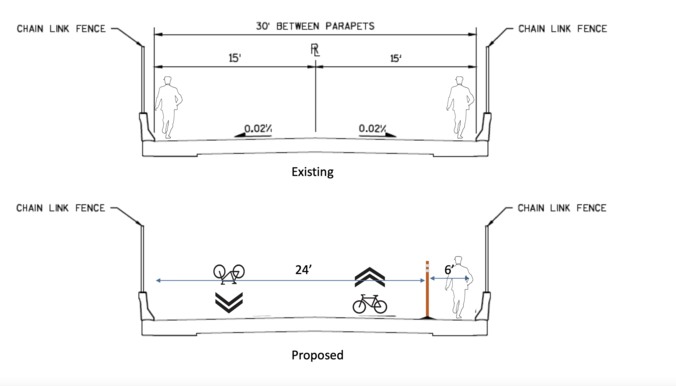 The Wisconsin Dept of Transportation controls the bridge surfaces, and unfortunately they did not go for letting us bolt the bollards onto the bridgedeck for the summer like is shown on diagram. The City is going to take a look at using some other kind of temporary separation - perhaps traffic barrels. They'll have to be removed during the winter though so we can do snow removal.

The pedestrian crossing will be on the south side of the bridges. You can see the full street markings and signage online here, showing how the lines and other traffic markings will taper between Thompson Drive, the bridges, then Milwaukee St/Milky Way.

Long term, the bridge needs to be completely replaced and rebuilt to be wider so there is more room for pedestrians and bikes. But again, the timing will be up to WisDOT. As part of the ongoing I39/90/94 corridor study that is studying the interstate from the Beltline to the Dells WisDOT likes to say "everything is on the table." I do expect the study to recommend replacing the bridges - but I don't expect it to happen until the 2030s at the earliest. I expect the WisDOT plan for the full corridor to have many many recommendations including some big proposals, all of which will be staged to manage the entire corridor. The footprint of the nearby Badger Interchange (where 94 and 90/39 split) could be a recommended change as part of the corridor study, and that would likely affect the timing of any replacement of the Milwaukee St bridges, so the desperately needed safety improvements might get tied up into a much larger project. Please let your state representatives and the Governor know you want to see safety improvements on the Milwaukee St bridges improved as soon as possible.

Here's where the new stops on Cottage Grove Road are going to be  (the 2 vertical lines up the middle are the Interstate)- green dots are new bus stops, red squares are bus stops that will be closing, black dots are stops that are staying the same: 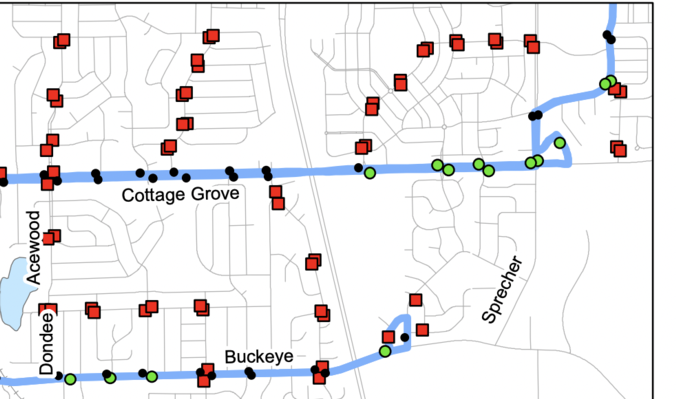 And here's what a Continental Crosswalk is: 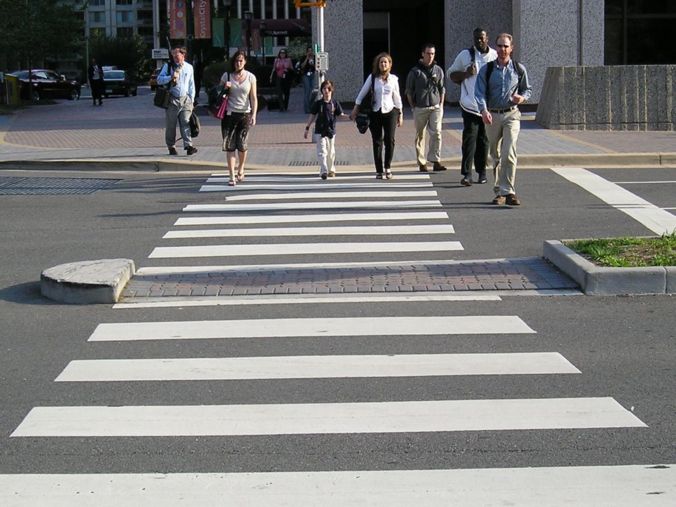 (First image from the NATCO website, the second image from SFBetterStreets.org)

5. For discussion: Milky Way Drive Speed humps. I'm not sure what the Transportation Commission is going to say about this project. It's going to be the example project for a discussion about what to do about "new" streets that already need safety improvements and where the scoring system doesn't quite work. Installing traffic safety improvements on Milky Way on the conventional scoring system doesn't score very high, but it's got some special circumstances that might give us some pause. Milky Way actually has higher traffic counts than North Star Dr, even though the street network design clearly envisioned North Star to be the main traffic carrier in the new area. The traffic is also going faster on Milky Way than on North Star Drive. This is likely because Milky Way is the first street someone can use to enter the North Star neighborhood when approaching from Milwaukee St. I'll also bet that some people take Milky Way because it doesn't have the speed humps that were added to North Star Drive. 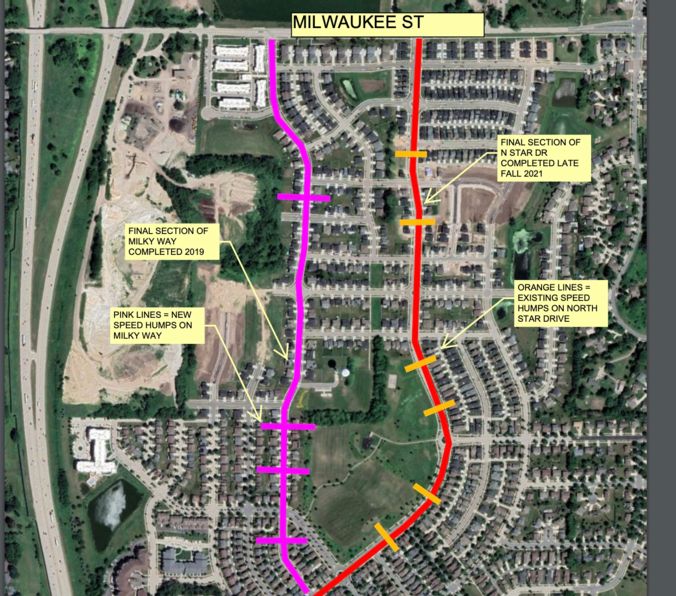 Regardless, we see the numbers on Milky Way are worse than on North Star, and I don't think the current scoring system quite takes these external factors into account,  and so I'm hopeful the Transportation Commission will approve adding speed bumps to Milky Way.

Overall, as City I think we should be very proud of the work our Traffic Engineering department is doing, and their work is being recognized nationally with Safe Streets Madison and our Vision Zero effort. I'm also still very excited about Madison's proposal to the Safe Streets for All Grant program, which was part of the Bipartisan Infrastructure Law. Madison was the only city in Wisconsin that had done all of the planning work necessary to apply for the grant, which if we get, will fund $20 Million of improvements around Madison. We should hear back for on this grant soon.