Get the latest Employee Updates, information on working from home, policies, and data related to COVID-19.

Any candidate or employee may be subject to testing before appointment into any City position.

If the applicant or employee requests the test results within 60 calendar days of being notified of the disposition of the employment application, the City of Madison will provide the results.

Any candidate selected for a position that requires a CDL must undergo drug testing before appointment to the position. Please work with your assigned Human Resources analyst to schedule the vendor to perform the test.

The results of test must be negative (meaning a verified negative result for alcohol, drugs, and controlled substances). If the test does not meet this standard, the candidate will be disqualified from further consideration for that position as well as any other City position at that time. A candidate with a positive test will also be disqualified from any CDL holder position for 12 months from the date of the positive test. If a confirmed result is not possible due to a diluted sample, the candidate will not be considered for the immediate position but may apply for future CDL holder positions without restriction.

Immediately before the performance of any safety sensitive functions, an employee appointed to a position that requires a CDL needs to undergo an alcohol test, as outlined above. The results of the test should be negative (meaning a BAC of 0.00). If the test does not meet this standard, the candidate will be disqualified from further consideration for the position or any other City position at the time of the test.

Candidates for a position requiring possession of a CDL must, at the request of the City, provide written authorization for previous employers to release to the City any and all test results done in accordance with the FHWA’s Rules and Regulations concerning alcohol and/or drugs/controlled substances, including records of the individual’s refusal to test.

The Human Resources Director, or designee, will verify the information, obtain proof that the candidate has completed a rehabilitation program and the return-to-duty test requirements (if applicable), and give the information to the manager or supervisor involved. Manager and supervisors must not allow a CDL holder to drive if they know the individual has tested positive and has not been recertified and tested negative in return-to-duty testing.

This rate may be adjusted in order to maintain the minimum annual percentage determined by the Federal Highway Administration Administrator. These percentages for testing will be reviewed annually on January 1 and adjusted, following the direction of the Federal Department of Transportation and the Federal Motor Carrier Safety Administration (FMCSA).
Random alcohol and drugs/controlled substances tests must be unannounced and spread reasonably in a random selection process throughout the year. The selection of CDL holders for random testing, the timing and frequency of random tests, and the number of CDL holders to be tested on any given day will be determined by the City. The selection of CDL holders for random testing should be made by a scientifically valid method. Each CDL holder must have an equal chance of being selected for testing each time selections are made. Selections for random testing are done just before the start of each quarter.

When randomly selected, a CDL holder may be required to submit to either an alcohol or drugs/controlled substance test, or both. A CDL holder will only be required to undergo alcohol testing just before, during, or just after the performance of safety sensitive functions.

“Reasonable suspicion” means that a trained supervisor or City official has observed behaviors at work that are consistent with the use or misuse of alcohol, drugs, or controlled substances. These observations must be made just before, during, or just after work, when employees are required to comply with the drug-free workplace policy.

Supervisors should use the Reasonable Suspicion Checklist anytime they suspect that an employee may be under the influence of alcohol, drugs, or controlled substances.

Nothing on this webpage prohibits a supervisor or City official from determining that an employee is unfit for duty at any time. However, they must not use these circumstances to circumvent any of the requirements in this policy.

The supervisor or city official must write and sign a statement of their observations that led them to require a reasonable suspicion test. They must do this as soon as possible, before the results of the alcohol test are released and no later than 24 hours after the observed behavior.

If the alcohol test is done after two hours, but within eight hours, the supervisor or City official’s statement must include the reason that the test was not done within two hours.

The alcohol test cannot be done after eight hours. The supervisor or City official must still write and sign a reasonable suspicion statement, and include the reason the test was not done.

After reasonable suspicion is established, the drug or controlled substances test must be done within 24 hours.

The supervisor or city official must write and sign a statement of their observations that led them to require a reasonable suspicion test. They must do this as soon as possible, before the results of the drug test are released and no later than 32 hours after the observed behavior.

Drug and controlled susbtances tests cannot be done after 24 hours. The supervisor or City official must still write and sign a reasonable suspicion statement, and include the reason the test was not done.

When a post-accident test is required

Federal law requires CDL holders to undergo alcohol and drug testing after an accident, in any of the following circumstances:

This is summarized in the decision tree below. 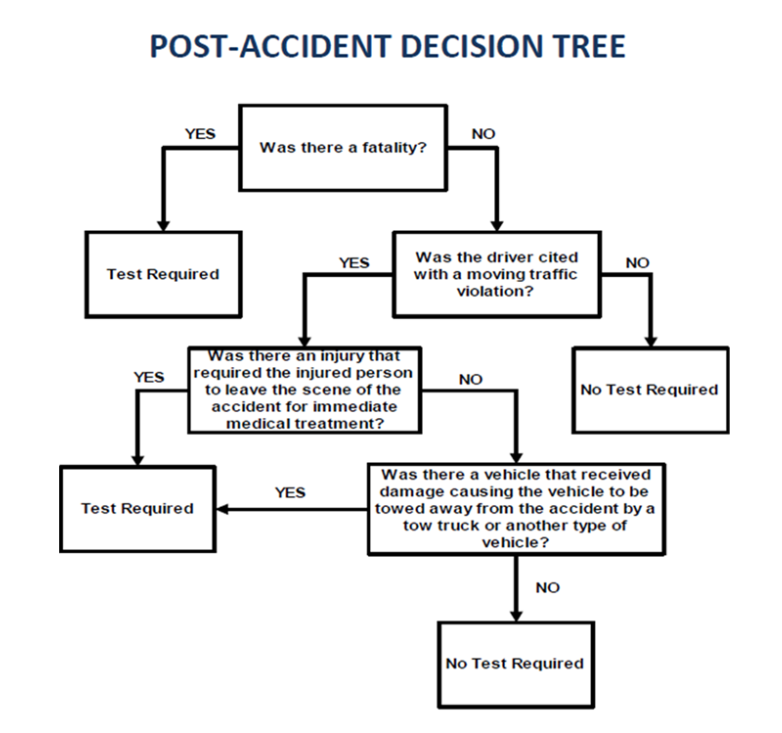 A surviving CDL holder is subject to post-accident testing as soon as possible after the accident. However, supervisors must not delay necessary medical attention. They should also allow the CDL holder to leave the scene of the accident if they need to get assistance in responding to the accident, get medical treatment for injured people, or get materials to secure the accident site.

Post-accident testing requires a breath alcohol test within eight hours of the accident, but within two hours is preferred. The drug test must be done within 32 hours. The CDL holder needs to remain available for such testing. Failure to be available for testing is considered a positive test, and is just cause for discipline up to and including discharge

Return to Duty and Follow-Up Testing

Before returning to work, the employee is required to do return to duty testing. They must also comply with all requirements prescribed by the SAP and remain in compliance with all prescribed and recommended rehabilitation and/or treatment programs. The employee may also have to do to follow-up testing as determined by the SAP.

If the employee violated the alcohol prohibitions of this policy, their return to duty alcohol test result must be less than 0.00 before they can return to work.

The employee may have to do return to duty testing for alcohol, drugs and controlled substances if this is recommended by the SAP.