Good weather can make all the difference when working in the field in the construction industry. Rain can make it muddy and messy. Snow can make it dangerous. Sharp wind can give you a chill down your back. Cloudy days can make for long days. But when you have real sunshine to brighten your day doing the hard jobs just got a little easier.

“That’s always been my motto. If someone says, ‘Can you do this?’ I think, ‘oh, I’ve never done that, but I can learn!’” Engineering Division Public Works Administrative Assistant Cindy Hemenway said. “I’ll figure it out.”

The laid back, positive attitude Hemenway has is a breath of fresh air for her whole team. She fosters a productive and fun working environment for everyone around her, and an inviting, informed voice with answers to anyone who calls the City with questions about work in the construction process.

Hemenway has helped residents and contractors through the permit process since 2001 at the City of Madison Engineering Division, an important role that keeps everyone safe working on the site, and anyone living in the area of the construction zone. Hemenway loves working on her team, even if she’s one of few, or the only woman.

“I feel some women may be intimidated by working mostly with men, but I’ve been doing it for 20 years, and I have found men easy to work with for the most part. It also depends on how you behave as well,” Hemenway said. “It doesn’t matter if it’s all men. What matters is we’re working together. We’re co-workers,. We’re helping each other out, and we’re working as a team. That’s how I always have operated and felt.”

Hemenway grew up in a small suburb outside of Chicago, named Schiller Park, which is right next to O’Hare International Airport. Hemenway earned a degree in legal administration. Her degree took her to the City of Chicago, where she worked for Sidley and Austin Law Firm for nearly five years before getting married and moving to Madison, Wis.

“We started to grow our family…When the babies went to school, I got a job with a company called United Greenhouse Systems. They build greenhouses for plants,” Hemenway said. “I was in charge of the big semi shipping big materials in big semis across the country.”

Little did Hemenway know, she was slowly moving toward the construction industry in an indirect way, before seeing the job opportunity at the City of Madison. Hemenway was hired into the City’s clerical pool.

“It [working in the clerical pool] was invaluable because when you’re in the clerical pool, you work in almost every single department in the city and because I had never worked for a government agency before—I didn’t know how city worked,” Hemenway said. “I got a little taste in each department, and it gave me a well-rounded view that the city has many different departments and many different functions, but we’re still under the same umbrella.”

Fast forward 20 years later, Hemenway’s journey continues, but not without remembering how she’s overcome her own stormy days and even uncomfortable moments as a woman in construction.

“I can recall a few times where I was a little uncomfortable where someone comes in and continuously calls you ‘sweetie’ and ‘honey,’” Hemenway said, “and there are times where I find that if I use humor to diffuse those moments, it’s best to start there. I’m fully prepared to go beyond that if I need to with firmness—but typically I try to use humor. But those moments are way in the past…way in the past.”

Hemenway is focused on a positive approach to her work, especially for women in construction.

"Women are such an asset. We’re all becoming educated in every area. If you don’t know what you want to do, try something unique. Try something. Step out of your comfort zone, and give it a try. You just never know where it’ll take you, you could just completely fly with it and excel in it and love it – but you have to jump in there and try,” Hemenway said. “Don’t be intimidated by anything. Be kind. Be gracious. Have a positive attitude. That’s going to take you far.”

Advice like that is inspiring to any woman or person in the industry, and it’s welcomed, especially when you’re working in the field on a cloudy day where a little bit of sunshine could make all the difference in a long wonderful career.

The City of Madison is highlighting the work of five women during National Women in Construction Week March 6-12, 2022. 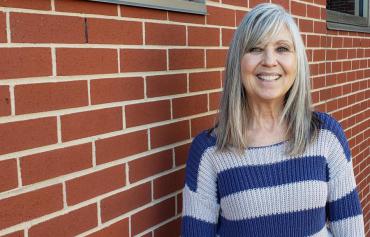