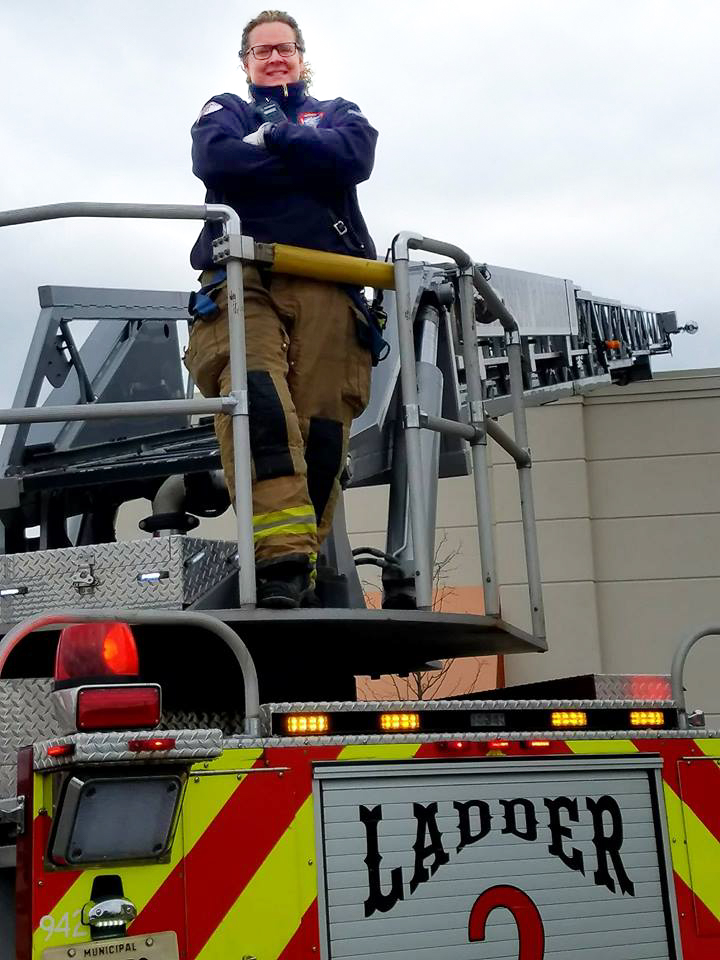 Apparatus Engineer Mindy Huitt steps down from the driver’s seat of Ladder 2 one last time this week, wrapping up nearly thirty years with the Madison Fire Department.

Huitt was a carpenter before joining the MFD’s recruit class of 1988. It was a career shift that might not have happened if not for the encouragement of a rugby teammate who thought she should give it a try.

She had no previous experience in the fire or emergency medical service, but she was willing to check it out and see what happened. She attended practice sessions that offered hands-on opportunities to try out the equipment and get a feel for what the job requires.

“None of it seemed terribly difficult. It really helps to be tall,” said Huitt, who’s been standing at six feet tall ever since the sixth grade. “My hat’s off to the shorter people who do this job!”

Her first assignment was at Fire Station 1 in downtown Madison. She spent five years there before becoming a paramedic and serving fifteen years on the ambulance. Her journey as a paramedic took her to Station 5 on the east side, Station 4 on Monroe Street, and Station 2 on Grand Canyon Boulevard, where she’s happily spent the majority of her career, including the last several years as an Apparatus Engineer.

“I loved the ambulance. Best job on the department, bar none,” she said. “You still get to be a firefighter, you stay busy, and literally every day you help somebody.”

Early on as a rookie at Fire Station 1, Huitt recalls a fire on the 200 block of King Street that put her new skills to the test. With smoke billowing from the eaves, it was evident the fire had a good head start. Nevertheless, fire crews charged in and confronted thick black smoke and extreme temperatures.

When sheet rock came tumbling from the bathroom walls, Huitt and her lieutenant knew they had to get out. They scurried back into a hallway, where one firefighter tried to grab the nozzle from Huitt, and others were yelling over one another trying to communicate. At one point, she thought she heard someone shout, “Somebody’s on fire!”

“I thought, ‘Well, it’s hot enough.’” Huitt recalls. “‘Okay, well, I’m going to spray water, and they’re either going to make merciless fun of me, or I’m going to put somebody out.’”

Huitt opened the nozzle and sprayed everybody down. Shortly thereafter, crews spilled out of the building soaking wet.

“In hindsight, we never should have gone in because smoke puffing from the eaves is a sure sign of a back draft or something bad’s going to happen,” she said. “We weren’t as strategic then as we are now.”

Just a couple years later, Huitt found herself on another call that would become an everlasting reminder of the high-stakes, unpredictable nature of the job.

“We got called to Simpson Street because someone was outside shooting people,” Huitt remembers.

She and her fellow first responders began checking for injuries in what was regarded at the time as a medical call.

“As we were there, we realized [the suspect] had set fires in his apartment,” she said. “We picked up a crew—it was Marcia Holtz, Gail Campbell, me, and K-Tal Johnson. We went in and there were five or six fires.”

The crew assembled an attack line and advanced into the apartment, knocking down fire in the living room, the hallway, a bedroom, and elsewhere before backing out for rehab. After a change of air bottles, they returned to perform overhaul operations.

“He'd blacked out his room with blankets and sheets, and Gail climbed in to take the blankets down so hopefully we could see, because it was a pretty good fire. After we searched it and confirmed there was nobody in there, we tried closing the door. Then we tried closing the door again. We couldn’t   figure out why we couldn’t close the door! That’s what you’re supposed to do (when you leave).”

So, against standard procedure, they decided to leave the door open. It was a decision that saved their lives.

“Come to find out, he had a wire over the door, with a weight attached, to set a bomb off,” said Huitt.

Although they encountered several guns and rifles throughout the apartment while fighting the fires, they later learned the unit was also booby trapped. They were lucky not to have tripped any of the triggers. When the explosive device was ultimately detonated by the Dane County Bomb Squad at Truax Field, the blast reportedly reached an expanse of 70 yards.

Surely, retirement will bring a different and welcomed change of pace for Huitt as she focuses full-time on the alpaca farm she runs with her partner, Linda, a retired Madison police officer.

As her career with the Madison Fire Department comes to a close, she reflects on the special bond she shares with her MFD family.

“There’s a lot of togetherness as firefighters. I spend 24 hours with these people at least two days a week. I would probably never come in contact with any of them in my regular life, and that keeps me less boring.”

With retirement on the horizon, she adds with a laugh, “I’ll be boring in three weeks.”

This content is free for use with credit to the City of Madison - Fire and a link back to the original post.
Category: General, Station 1, Station 2, Station 4, Station 5
Tags: Meet the MFD