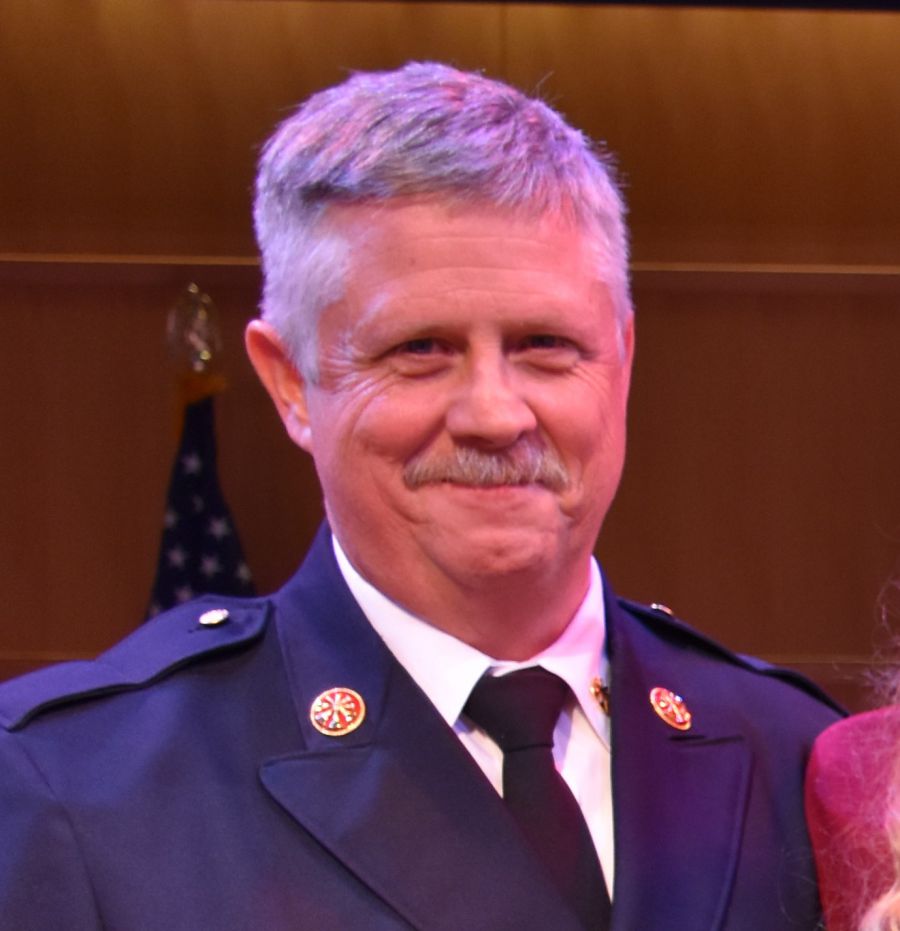 Assistant Chief Mike Popovich takes one last tour on Command Car 31 today—the 33rd anniversary of his very first day on the Madison Fire Department—as he wraps up a rich career that spanned nearly every rank and position within the department.

Though Popovich’s journey with the MFD began on March 21, 1988, his path into the fire service began years prior when his cousin, a volunteer firefighter at Tess Corners Fire Department, first got him thinking about firefighting as a profession. Popovich soon enrolled in the Fire Science program at Milwaukee Area Technical College and joined the Cudahy Fire Department as a paid on-call firefighter.

Meanwhile, he also embarked on a career with the United States Air Force Reserves, where he was trained as an Aircraft Rescue Firefighter (ARFF). This assignment, along with his continued work on the Cudahy Fire Department, piqued his interest in pursuing firefighting fulltime.

Popovich was first assigned to old Fire Station 7 on Raymond Road on the ‘B’ shift. Soon he was transferred to Station 2 and eventually to Station 1 downtown. He remained downtown for almost the entirety of his career, where he enjoyed the wide variety of calls, the different people he was called to help, and unique challenges presented by the various construction types in the Station 1 territory.

In January 1995, Popovich was among the first group of drivers to be promoted to the newly-classified position of Apparatus Engineer. Two years later he began serving as a Chief’s Aide on the ‘C’ shift, driving Command Car 31 alongside the Officer in Charge. He became a Lieutenant in 2001 and was assigned to Fire Station 4A and 1A. As a Training Officer with the recruit academy in fall of 2001, and again from 2004-2006, Popovich applied his expertise to train new recruits and help seasoned veterans keep their skills sharp.

Meanwhile, Popovich did continue to serve in the Air Force Reserves, achieving the rank of Chief Master Sergeant (E-9), before his retirement from the military in 2009. His deployments might have landed him a unique distinction among his peers, especially those who were on the department in May 1991. “I think I was the only one who wasn’t at the Butter Fire!” said Popovich. “I was on deployment at the time, I think on the east coast, and somebody said, ‘Hey, aren’t you from Madison? There’s something on CNN about this Butter Fire.”

Popovich spent the last four years as Assistant Chief of Support Services, where he worked with the joint labor-management Apparatus Committee to help usher in new front-line rigs and state-of-the-art equipment.

“The Apparatus Committee is a great committee,” he said. “I’m not the expert on what’s the best specification operationally or to get the best ride, but as a manager, you take all that input, put it in a package, and make decisions based on everybody else’s input.”

It’s a hefty responsibility given the price tag attached to these big-ticket items which the community depends on during all kinds of emergencies. Some notable upgrades to the fleet under Popovich’s leadership include nine new ambulances; three ladder trucks, including a tractor-drawn aerial; a new HazMat trailer; and anti-idle technology on every rig.

Three decades in the fire service undoubtedly lead to a storied career, but there was no year quite like the last. As a global pandemic swept across our community, the Madison Fire Department was not immune from the consequences. Popovich notes that one year ago today, he was recovering from COVID-19.

“I think I was the first (confirmed) positive case at MFD. I haven’t been on an EMS call since 2006. How did I get it?” Popovich wondered. “I thought, ‘What the heck is going to happen to the department?’”

The early cases, and awareness of the inevitable, prompted Fire Chief Steven Davis to send home all staff who were not responding to 911 calls at least a week prior to local officials enacting Safer At Home orders.

“We’re supposed to be the people who help other people, so we’re not supposed to get sick. Sending us home was a great call,” Popovich said.

As the cloud of COVID-19 begins to lift, Popovich looks forward to the possibility of traveling  with his wife, Kim. Their daughter Olivia is a sophomore at Iowa State, and their daughter Sarah is a nurse in London. Their son, Eric, is a firefighter on the department, and Popovich will no doubt stay connected with his friends and colleagues at MFD.

With his career coming to a close, Popovich takes a moment to reflect on the fateful way in which it all began. Five recruits, including Popovich, were under consideration to be hired by the Police and Fire Commission (PFC) in 1988. Budget limitations forced the possibility that the PFC may only hire three or four people, and Popovich knew he was on the chopping block. Ultimately, the PFC voted to hire all five. 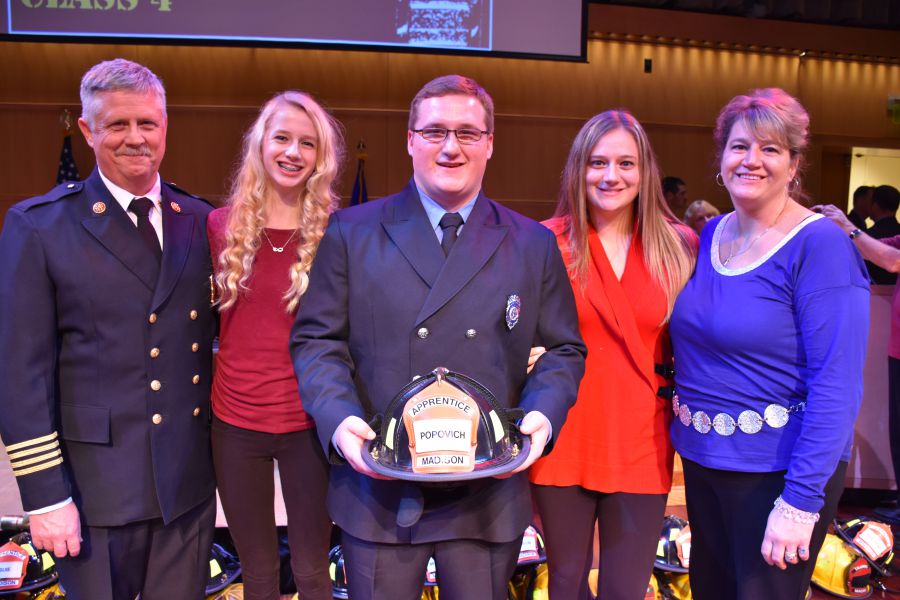 This content is free for use with credit to the City of Madison - Fire and a link back to the original post.
Category: General, Station 1, Station 2, Station 4, Station 7
Tags: Meet the MFD