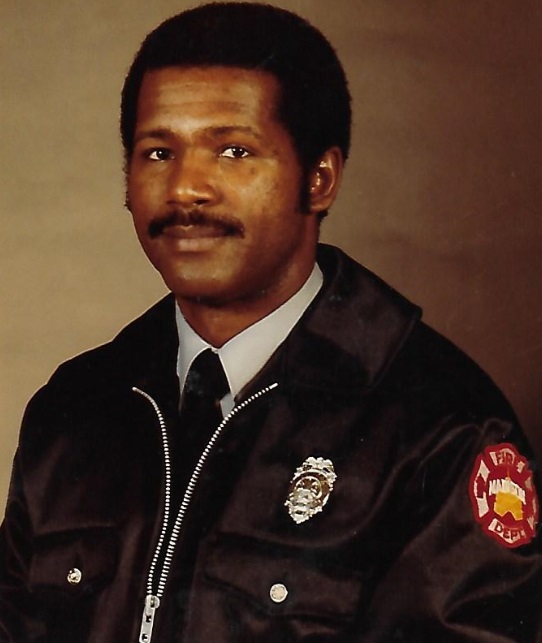 Prior to his career at the Madison Fire Department, Arthur Dinkins III served eight years in the U.S. Navy and was employed at Wisconsin Physicians Service (WPS). He always enjoyed participating in sports and being physically active, though it never occurred to him to become a firefighter. In fact, growing up, he never thought Black people could even be firefighters. It was not until he heard that the Madison Fire Department was hiring that Dinkins applied, thanks in part to the encouragement of his friend Norman Hawkins.

Arthur Dinkins III began his illustrious career with the City of Madison Fire Department in 1982. He started at Fire Station #1 as a firefighter with two other rookies. Then, in 1988, his path veered into community education, where he enjoyed reaching out to juveniles through the Children and Fire Program. This program helps educate juvenile fire setters as an intervention to eliminate, or at least reduce, the danger to their home and community. In 1993, Dinkins was promoted to Captain and one year later became a Division Chief. Finally, in 2002, Dinkins made the rank of Assistant Chief, which he held until his retirement on January 30, 2004. He was the first Black chief in the department’s nearly 150-year history.

Dinkins was assigned to multiple stations during his career, one of which was old Firehouse #6 located at Fish Hatchery Rd. and Park St., only a short jaunt from his home on Drake St. and S. Brooks St.

“The history of old #6 was nice and the crew was great!” he said.

As he progressed through his career, he was tasked with his favorite role of Personnel Chief. He prided himself in always giving members “a fair shake,” never holding grudges, and listening to an employee’s full explanation and reasoning for their actions. He felt his softer approach helped build the bonds between the union and administration.

“Chief Amesqua and I developed a good relationship with the union,” Dinkins recalls.

Despite his own achievements, Dinkins says his proudest moments were when he was able to pin badges on his sons, Arthur “Chevi” Dinkins IV and Dylan Dinkins. Chevi is currently a firefighter at Station #8 and a member of the Heavy Urban Rescue Team (HURT). Dylan was promoted to Apparatus Engineer in 2011 and to Lieutenant in 2014.

Arthur Dinkins III felt his career on the Madison Fire Department allowed him to raise his family in an “honorable” way. The schedule gave him the flexibility to homeschool his children and be involved with much of their childhood. He is delighted that his sons have that same opportunity.

While many people think firefighting is an extremely dangerous career, Dinkins says the truth is firefighters are trained and taught to think wisely and make good, educated decisions on the ever-changing environment of the fireground.

“We never want to send firefighters into a position where they cannot exit,” he said. In other words, firefighters look out for each other during emergency calls. They risk a lot to save a lot, but they adjust the risks they take for what they ultimately can save.

Though he felt that being a firefighter was not “in his blood,” Dinkins thoroughly enjoyed riding the tailboard at Station #1, even in bad weather when, for protection, “We would duck our heads under the tarp covering the hose.” He also loved wearing the uniform and badge.

“I took pride in representing the Fire Department and City of Madison,” he said.

Assistant Chief Mike Popovich even recalls such a time when Dinkins’ pride shone brightly, even slightly comically. It was May 1996, during the Mifflin Street Block Party. Popovich was the Chief’s Aide and Dinkins was the Officer in Charge (OIC). Division Chief Dinkins III received reports that the crowd was becoming unruly and he decided to check it out in person. Normally very calm with a peaceful demeanor, Dinkins became quite upset at seeing the crowd start dumpster fires and damage the city. With little regard to his own safety, Dinkins approached the unruly crowd with a raised voice to get them to stop. It was the one and only time Popovich ever saw Dinkins get upset, but he remembers it to this day as an example of Dinkins’ pride in his career and devotion to the city of Madison. He and Popovich still maintain a friendship to this day.

Dinkins hopes the Madison Fire Department continues to hire a diverse workforce. Ultimately, though, he hopes the number of stations and firefighters employed grows as the City of Madison grows. This should ensure a great level of service and maintain a good measure of safety on the fireground.

Since retiring in January 2004, Dinkins has kept himself busy and quite happy. He enjoys video calls with his granddaughters, playing cards (namely Bid Whist) online, and going on long walks with his wife, Deborah. One of his goals in retirement was to learn to play piano.

“Despite purchasing a piano and taking lessons, I realized it was not for me,” he said with a chuckle.

Improving and becoming more regular in his theological study habits was another important retirement goal of his. Impressively, Dinkins has been able to perform ministry in different parts of the world, including five years in Mexico and currently in Natchez, Mississippi for two years. He is thankful that his career at the Madison Fire Department has given him the opportunity to enjoy such an abundant life.


This blog was authored by Apparatus Engineer Christopher Hahn.

This content is free for use with credit to the City of Madison - Fire and a link back to the original post.
Category: General, Station 1, Station 6
Tags: Meet the MFD, Black History Month