The City of Madison and communities across the nation are celebrating Hispanic Heritage Month, which celebrates the histories, cultures, and contributions of American citizens whose ancestors came from Spain, Mexico, the Caribbean and Central and South America.

We at the Madison Fire Department felt it was an excellent opportunity to introduce you to retired Fire Captain Gil Gonzales, one of the first Hispanic firefighters hired to the MFD. His contributions over the course of his career left a lasting influence that we all continue to benefit from to this day. 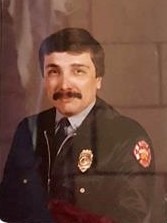 Prior to joining the MFD, Gonzales was a member of the United States Air Force at the Truax Field Air Force Base in Madison. With four years of firefighting experience under his belt in the military, he decided to apply to the Madison Fire Department when he heard they were hiring.

His first day at the MFD was January 10, 1965, just two days after being discharged from the Air Force.

“At that time, there was no training academy, so you were assigned directly to a station and were training on the job,” Gonzales recalls. “Luckily for me, I had firefighter experience. At least I had an idea of the job and the jargon.”

His first assignment was at old Station 4 on W. Dayton Street. When Truax closed down a few years later, the City of Madison was tasked with providing fire protection at the airport. Because of his prior aircraft firefighting experience and knowledge of the equipment, Gonzales was transferred to the old military fire station that eventually became Fire Station 11. He worked there for four years before transferring to Station 1.

While at Station 1, he worked his way up from Firefighter to Apparatus Engineer, Chief’s Aide, and then Lieutenant. It was at Station 1 where Gonzales worked with management to start the Children and Fire Program, which involved working with young fire setters to educate them about the dangers of playing with fire. Four years later, the program was given to the Public Information Division and it’s still a part of the Community Education Division to this day.

Gonzales eventually returned to old Station 4 as a lieutenant. When that station was retired, he moved to new Station 4’s location on Monroe Street. The department started tracking chemical spills and hazmat calls both throughout the city and on the UW-Madison campus.

As a result, Gonzales worked with management to develop the first Hazmat Response Team for MFD. He was sent to study other department hazmat team structures and attended the National Fire Academy in Emmitsburg, Maryland for additional training. Now the HazMat Team is an integral part of the Madison Fire Department, serving Madison as well as surrounding counties.

Gonzales was promoted to Captain and led the HazMat Team at Station 6 for eight years before transferring to Station 2, where he worked with the Quint, or ‘the Beast,’ a ladder so large it was street illegal. He retired in 1993.

Gonzales credits his career success to many things—a strong work ethic he learned by watching his dad, planning for the future, working hard toward his goals, and being prepared for opportunities.

He didn’t consider himself a role model at the time; he was just doing the best job he could.

“Now that I am older, I hope that my career can be a role model for younger firefighters, especially minority firefighters,” he says.

Gonzales lives in Madison and enjoys getting together with other retirees, rehashing old stories and memorable incidents. He speaks very fondly of his time with the MFD. He has two sons, seven grandchildren and a new rescue dog that keep him busy.

We thank Capt. (Ret.) Gonzales for his 28 years of service to the community as well as the lasting contributions he made to the City of Madison Fire Department.


This blog was authored by Adminstrative Clerk Dawn Turner with assistance from Firefighter/Paramedic Michael Flores and direct contribution from Captain (Ret.) Gil Gonzales.

This content is free for use with credit to the City of Madison - Fire and a link back to the original post.
Category: General, Station 1, Station 4, Station 6, Station 11
Tags: Meet the MFD