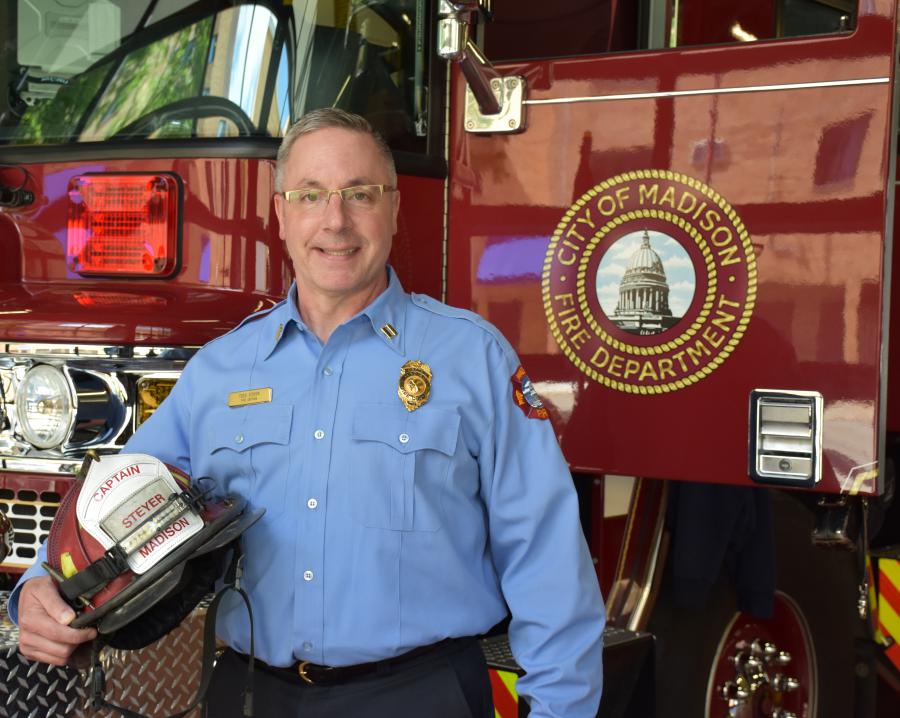 After three decades immersed in a career he describes as rewarding, challenging, and gratifying, Captain Todd Steyer retires from the Madison Fire Department.

Steyer first took interest in emergency medical service in 1981 while a member of the National Ski Patrol, working alongside a number of EMTs rendering aid to injured skiers.

“I really liked caring for people. I liked the technical aspect of moving injured persons in a toboggan, working in conjunction with other teammates, down the hill,” Steyer said.

The experience set him up for the fulfilling career ahead in fire and EMS.

A native of Lake Delton, Steyer became an EMT and joined the Kilbourn Volunteer Fire Department in 1985. After some additional time as a volunteer firefighter and EMT with the Lake Delton Fire Department and Ambulance Service, he aspired to make a professional career of it. On June 1, 1987, he came aboard the MFD.

After graduating Madison’s Recruit Academy, his newly-acquired skills were immediately put to the test. Assigned to Fire Station 2 on the west side, Steyer’s shift began at 7:00 a.m. At 7:15 a.m., his crew was dispatched to a structure fire — on his very first day.

“I still remember what it was like getting my gear on, responding to the call, the adrenaline rush,” Steyer recalls. “We had a very thorough training academy, so I felt comfortable. You’ve trained for what you’re expected to do, and it was time to put that training into action.” 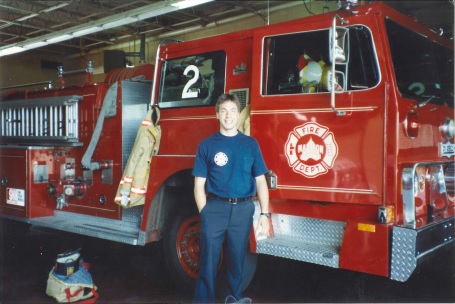 Steyer remained on the west side as he eventually transitioned to Fire Station 9 on Midvale Boulevard. He then became a paramedic in 1991, an assignment that took him east of the Capital to Rescue 3 on Williamson Street. He later moved on to Station 4 before earning a promotion to Lieutenant in 1999.

Through the course of his career, he’s served on several special teams, including High-Angle Rescue (now part of the Heavy Urban Rescue Team), Rapid Intervention Team, and the Hazardous Incident Team. In 1995, he joined the MFD Honor Guard.

“I had no military background, and the current military members had a real project at hand to teach me to march in cadence,” Steyer says with a laugh.

But he caught on, and he says being a part of the Honor Guard was very rewarding, yet emotional at times, particularly when assignments brought them to funeral services for those who had passed on.

In 2001, while serving as a station officer at Fire Station 3, Steyer met a citizen named Barbara Lee, who felt compelled to do something for the benefit of firefighters following the attacks against the World Trade Center on 9/11/01. 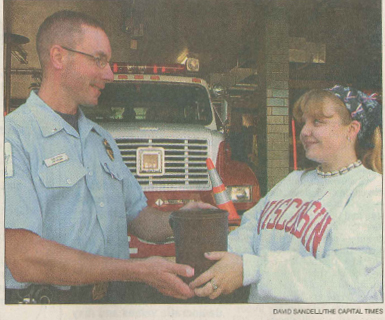 After selling red, white, and blue lapel ribbons to raise money for the New York Firefighter’s 911 Disaster Relief Fund, Lee brought her donation to Station 3. That’s when Steyer purchased a ribbon of his own, a remembrance of those who did not make it home. He carries it with him to this day.
​
Over the years, his journey as a firefighter, paramedic, and lieutenant afforded him the opportunity to serve at almost every fire station in the city. He, along with two other lieutenants, was also selected to open Fire Station 12 when it began operating in 2009.


Looking for the next challenge, Steyer pursued his interest in fire investigation and became Captain of the Fire Investigation Division in 2014, a position that kept him intrigued for the remainder of his career.

“Determining origin and cause of a fire is similar to solving a big puzzle,” Steyer says of the process, which consists of conducting interviews, understanding fire behavior, analyzing burn patterns, collecting significant additional data, collecting evidence, and then putting all the pieces together. Then you have to make sure the circumstances are consistent with witness statements.

As he takes stock of his thirty-year career at the Madison Fire Department, Steyer is grateful to have made a positive impact in people’s lives. He credits family friends who served as mentors early on, during his volunteer days, for inspiring him to pursue this line of work.

Though he says he has a list of home projects to tackle, he’d rather grab his tackle box. An avid fisherman, he’ll now have the time to enjoy that and other hobbies, including golfing, hunting, and snowmobiling. And he looks forward to sharing more memories with his wife and his two daughters, who both attend UW-La Crosse.

“I am so appreciative and feel so honored and fortunate to have been selected to be a member of the Madison Fire Department,” Steyer went on to say. “It is a great organization and what makes it great are the talented, caring, and compassionate members.”

Steyer also wishes to thank City leaders, Fire Administration Command Staff, the Administrative Support Staff, his current and past co-workers, and Fire Fighters Local 311 for their support, trust, and friendships.

“It is the biggest extended family anyone could possibly imagine.”

“It’s a great career,” he says with a smile. “This is bittersweet.”

This content is free for use with credit to the City of Madison - Fire and a link back to the original post.
Category: General, Station 2, Station 3, Station 4, Station 9, Station 12