The Madison Fire and Police Departments have a thriving Scottish bagpipe and drum band: Madison Pipes and Drums.  They are a very active group in our community, playing at many different ceremonies including promotions, parades, funerals, and other events in southern Wisconsin and northeastern Iowa.

The following information, by Damion Roberts, from Lone Star Piper.com, reveals more about the history of bagpipes in the fire service:

The tradition of bagpipes played at fire department and police department funerals in the United States goes back over one hundred fifty years. When the Irish and Scottish immigrated to this country, they brought many of their traditions with them.  One of these was the Great Highland Bagpipe, often played at Celtic weddings, funerals and ceilis (dances).

It wasn't until the great potato famine and massive Irish immigration to the East Coast of the United States that the tradition of the bagpipes really took hold in the fire department.  In the 1800s, Irish immigrants faced massive discrimination.  Factories and shops had signs reading "NINA" - No Irish Need Apply.  The only jobs they could get were the ones no one else wanted - jobs that were dirty, dangerous, or both - firefighters and police officers.  It was not an uncommon event to have several firefighters killed at a working fire.  The Irish firefighters' funerals were typical of all Irish funerals - the pipes were played.

It was somehow okay for a hardened firefighter to cry at the sound of bagpipes when his (sic) dignity would not let him weep for a fallen comrade.

Those who have attended a funeral where bagpipes were played know how haunting and mournful the sound of the pipes can be.  The most famous song played at fire and police funerals is Amazing Grace.
It wasn't too long before families and friends of non-Irish firefighters began asking for the bagpipes to be played for fallen heroes.  The bagpipes add a special air and dignity to this solemn occasion.

Bagpipe bands representing both fire and police often have more than 60 uniformed playing members.  They are also traditionally known as Emerald Societies after Ireland - the Emerald Isle.  Many bands wear traditional Scottish dress while others wear the simpler Irish uniform.  All members wear the kilt and tunic, whether it is a Scottish clan tartan or Irish single-color kilt.

Today, the tradition is universal and not just for the Irish or Scottish. The bagpipes have become a distinguishing feature of a fallen hero's funeral. 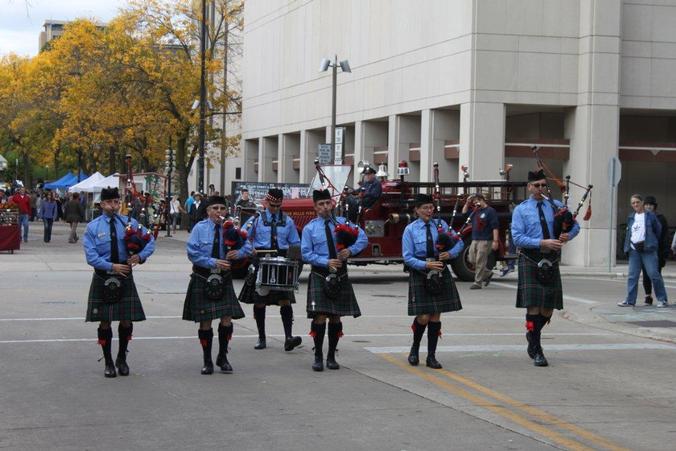 This content is free for use with credit to the City of Madison - Fire and a link back to the original post.
Tags: UW, Join the Team, Madison Fire EMS, Madison Police, Public Safety