The annual Dane County EMS Banquet was held this weekend, and Madison Fire Department was well represented in many of the categories. The night got started with "Years of Service" awards, and MFD members appeared in all categories.  For 20 years of service, Madison Fire was represented by Ronald Blumer, John Clark, Douglas Korducki, Jeffrey Marchillo, Peter Matt, Robert Ready, Thomas Reiter, Paul Ripp, Elizabeth Risler, Terence Ritter, Steven Tennant, Joseph Tiller, and Lisa Van Buskirk.  25 years of service awards were handed to Steven Dick, David Ianne, Lance Langer, Arthur Price, Robert Wallace, and Eric Brinkmann.  30 years of Service were awarded to Joseph Conway Jr, James McDuffie, and Peter Ragotzkie. The awards for the longest years of service were for 35 years of continual service, and Madison is proud to have 3 members in this category: Lawrence Grab, Robert Hansbro, and Ernesto Martinez.

The survivor portion of the banquet is always the highlight, and this year, it was marked by 29 saves; 9 more than last year.  Dr. Michael Lohmeier, Medical Director for the City of Madison Fire Department and Dane County, presented this part of the program. Many of the survivors were there with their families, and received a round of applause along with their second chance at life.   Recognized for their strength and courage shown during and after their lifesaving measures were, with dates of the saves (all in 2014): April 4: Christopher Hubert, Josh Erdman, Dan McCosky, Dan Barnard, Dan Pazurek, and Dan Williams.  May 2: Michael Flores and Shannon Smith.  May 6: Paul Poker and Chad Powell.  May 11: Lisa Becher and Nicolas Zimpel.  May 24: Daniel Wisneiwski and Jeffrey Clapero.  June 3: Todd Crawley, Paul Poker, Brian Borgrud, Robert Gangler, Robert O'Hagen, and Craig Underkofler.  November 16: Shawn Murray, Chad Powell, Patrick Howe, Kristopher Kiley, David Santana, and Jared Schmitt.  November 23: Joseph Schutz, Stephen Melde, William Boone, Zachary Hake, Michael Mueller, and James Schmitt.  December 20: Keith Wilke and David Guthrie.

The evening's festivities concluded with the presentation of the Robert L. Brunning Memorial Award, a prestigious award given to an EMS District that exemplifies outstanding professionalism and service to the community it serves.  This award was established in 1996 as a memorial to the late EMS Systems Coordinator, who was instrumental in the development of the system for Dane County Emergency Medical Services.  The recipient of the 2015 Robert L. Brunning Memorial Award was the City of Madison Fire Department. MFD won for many reasons, but especially for the work that is being done in setting up an Ebola response plan for our service district which is then shared with all other Dane County EMS districts.  We are proud to be honored by the Dane County EMS Association with this award, but prouder still to be serving you, the citizens of Madison. 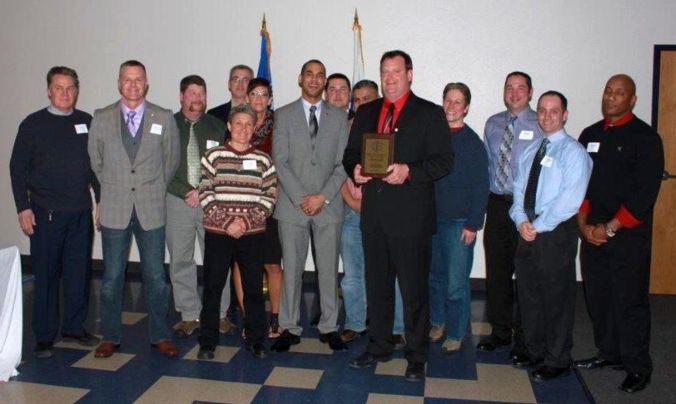