Fire Station 13 is Open for Response

After several years of planning, drawings, and staffing and response planning, Fire Station #13 opened for service today 0700 hours.  The Department is very excited and proud to be providing a high level of EMS and Fire service to the citizens on the far east side of the city.  As Madison continues to expand into the surrounding countryside, the Fire Department has faced challenges on how to meet the demand for calls for service in a timely fashion.  As we have seen in the past, a new fire station sometimes looks lonely in a field at first, but then one day it is surrounded by the hustle and bustle of city life.  If we could roll back the clock and look at Fire Station 9 on Midvale Blvd., we would see that when it was first constructed, it was on the very edge of town, what was then considered the "far west" side of Madison.  However, the city continued to grow around it, and that area is now deemed the "near west".  It was a similar situation for Station 2 on Grand Canyon Drive back in the early 1980s, but  somehow the city always catches up to the fire station location.

Fire Station 13 is certainly the pride of our station fleet.  Built to be very modern and efficient, it employs many state-of-the-art systems to maximize its effectiveness.  It utilizes solar power, geothermal heating and cooling systems, and a site layout that maximizes passive lighting.  The station is incredibly cost-effective to operate; I will have more details about that in an upcoming blog post.  For now, the MFD is just enjoying its latest addition to our service family.

The station is currently staffed with 4 firefighter/EMTs who will cover that side of town 24/7.  The funding for the staff was made possible through a SAFER (Staffing for Adequate Fire and Emergency Response) grant acquired by the City through the federal government.  The SAFER grant allows for the Department's current needs to be met in communities, while picking up the operating bill over time.  Most of the expansion in operations the fire department has accomplished over the last 10 years has been made possible through the SAFER grant, and we are incredibly grateful to have been able to avail ourselves of this resource.    As we look to add a paramedic level response in the future to the eastside, new Fire Station 13 will play a potential key role in ambulance location.
. 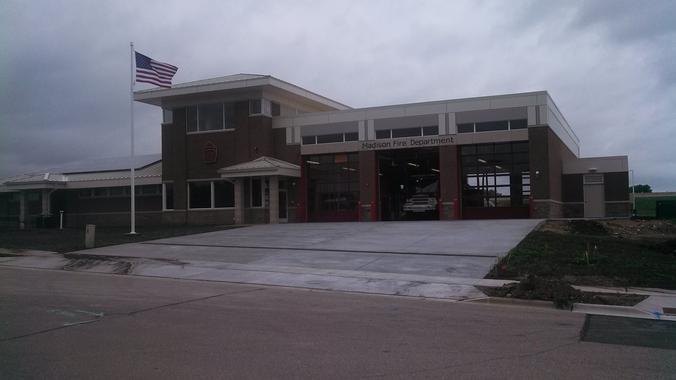 This content is free for use with credit to the City of Madison - Fire and a link back to the original post.
Category: Station 13
Tags: UW, Fire Stations, Public Safety