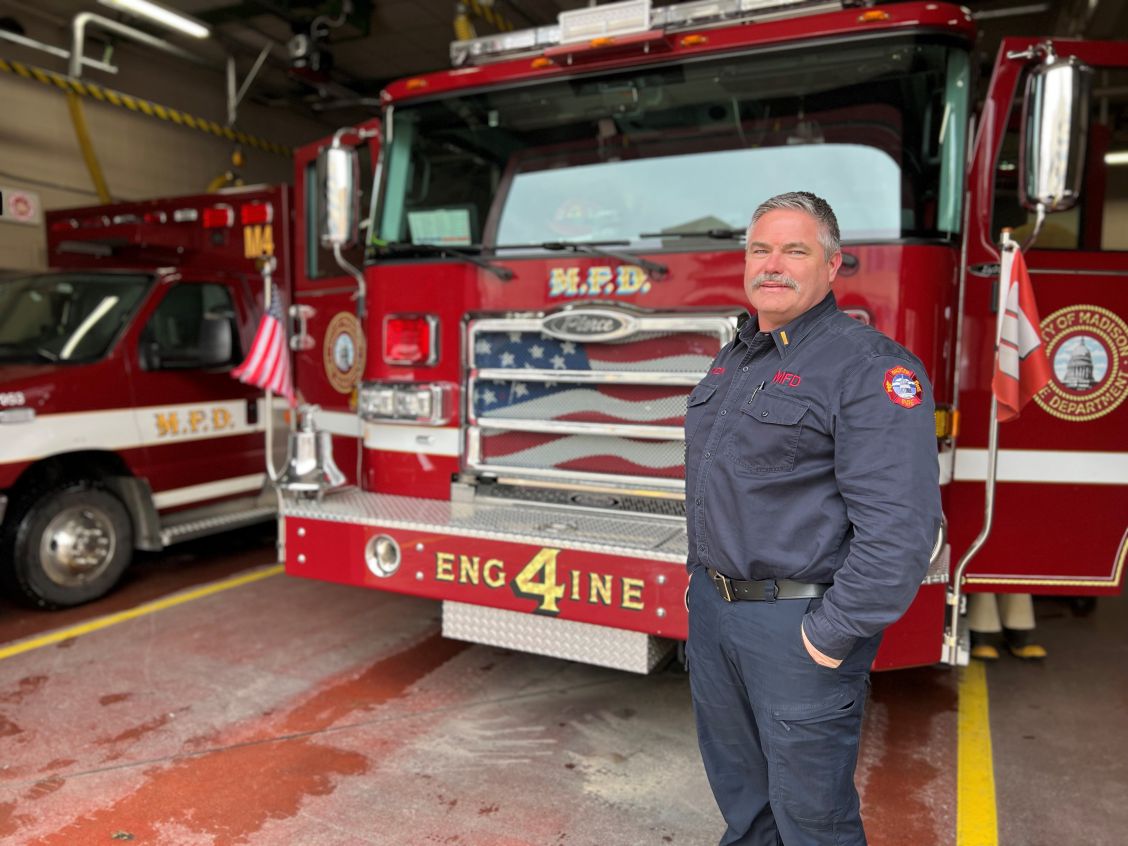 Lieutenant Frank Jonczyk, a familiar face to the UW-Madison campus and near west side, retires this week after nearly 30 years of service to the city of Madison.
Jonczyk joined the Madison Fire Department in November 1993, following in the footsteps of his father, who was a firefighter in Illinois. Visiting his dad at the firehouse on weekends, along with the trill of occasionally pulling hose lines and riding on the fire truck, had an early influence on him. It also gave him a glimpse into the essence of the fire service.
"It's about the people, not just the people you work with but also the people you help," Jonczyk says. "If people are getting in this business for any other reason—other than to help people—they’re doing it for the wrong reason."
Jonczyk started out as a firefighter at Fire Station 6 and began serving on the ambulance as a paramedic within two years. After some time on the east side at Stations 3 and 5, he returned to Station 6. He was eventually promoted to Apparatus Engineer and moved over to Station 8. Jonczyk was promoted to Lieutenant in January 2007, and he spent much of his time as a lieutenant at Fire Station 4, across the street from Camp Randall Stadium.
"I like the location of it, and the call variety, but more than anything it's the crew. I had some second thoughts about leaving because it's so hard to leave when you've got a great crew."
Station 4's placement at the edge of the UW-Madison campus and into the near west side of Madison lends itself to an array of call types and the opportunity to learn something new every day.

"I had a cow pull the fire alarm the other day!" Jonczyk said. "I didn't know there was a cow with a hole in it on campus!"
The cannulated cow, which resides at the UW-Madison's Dairy Cattle Center, reportedly bumped into a fire alarm pull station in December, prompting a full evacuation of the building.

"We reset the pull station and discussed the importance of not doing that again with the cow," Jonczyk noted in his official fire report.
Looking back at all the positions he once held, Jonczyk remembers fondly his time as a member of the Rapid Intervention Team (RIT). The team's designation as the crew that comes to the aid of fellow firefighters who become injured, trapped, or disoriented during a structure fire meant Jonczyk trained frequently, stayed busy, and responded to almost every fire in the city.
Now with retirement on the horizon, Jonczyk looks forward to more time with his family, noting that the 24-hour shifts at MFD mean he's been away from home one-third of the time over the past three decades. Still, he hesitates to say he's been "coming to work" all these years because there's been so much enjoyment in every shift.
"When you come and enjoy doing this, it’s kind of hard to hang it up," he said. "But that being said, you also have to realize when it’s time to hang it up."
This content is free for use with credit to the City of Madison - Fire and a link back to the original post.
Category: General, Station 3, Station 4, Station 5, Station 6, Station 8
Tags: Meet the MFD