Nick Fisher has been a strong contributing member of the City of Madison for many years.  A graduate of Memorial High School, Nick has been involved in the hockey programs at many levels, utilizing his strong managerial skills.  Nick works as a bagger and custodian at Copps Grocery Store.  He also finds time to volunteer at the Henry Vilas Zoo in the summer, working the lion cart and answering big cat questions.

Born on August 28, 1983, Nick has long been an avid fan of the City of Madison Fire Department, often visiting the stations and taking great interest in our firefighters and their work.

In recognition of Nick's many accomplishments and contributions, and in honor of his 30th birthday, The Honorable Mayor Paul Soglin has proclaimed this day, August 28, 2013, to be Nicholas S. Fisher Day in the City of Madison.

If you see Nick today, join me in thanking him for his service!  The City of Madison is fortunate and honored to have such a great citizen! 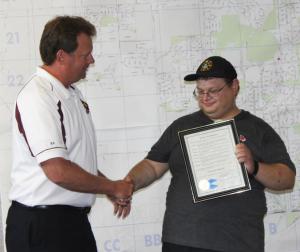 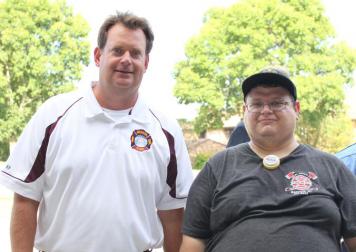 This content is free for use with credit to the City of Madison - Fire and a link back to the original post.
Tags: A Day In The Life Of A Madison Firefighter