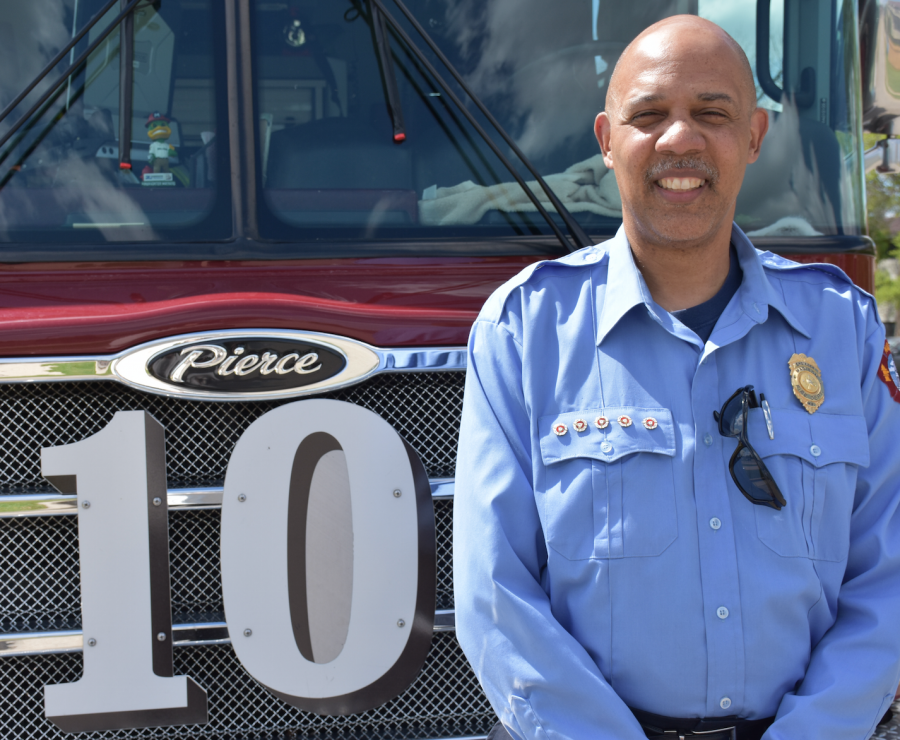 For Apparatus Engineer John Lucille, to be a firefighter was to fulfill a childhood dream.

“I always wanted to be a firefighter, ever since I was a kid in Chicago,” he said.

After nearly 28 years with the Madison Fire Department, Lucille stepped down from the driver’s seat of Engine 10 for the last time on May 30, 2016.

Born in Chicago, Lucille and his mother relocated to Newark, New Jersey for a few years before moving to Madison when he was 10 years old. Along the way, he maintained his interest in fire trucks, craning his neck to see one if he ever heard sirens draw near.

It took him two attempts to get hired to the MFD. Knowing how fiercely competitive it is to earn a spot in the academy, Lucille never lost his sense of appreciation for having made it in 1988.

"I think over 800 people applied for 9 positions in my class,” he recalls.

Prior to becoming a firefighter he was a housing specialist for the Dane County Housing Authority. His commitment to helping people is the common thread that ties together his entire career.

“To me, technically the Fire Chief is not your boss. It’s the public,” he said.

Lucille says he never forgot how, as a Madison firefighter, he’s there to serve the people and positively represent the City of Madison. Interacting with the public was always one of his favorite parts of the job.

“If a kid or somebody came up to the engine and wanted to look at it, I always made sure to stop and talk to them," he said. "Be engaging. That’s what it’s all about.”

Lucille became an Apparatus Engineer when the position was officially created in 1995. Rest assured the nickname given to him by his colleagues, “Loose Wheel,” was merely a phonetic play on his last name and not a reflection of his skills as a driver!

In 1996, he was transferred to Station 10 on Troy Drive and enjoyed a four-year stint there before being assigned to “rove” around various stations throughout the city in 2000. Then he spent some time at Station 5 on Cottage Grove Road, and he ultimately landed back at Station 10 in 2010, rounding out his career on Madison's north side.

“You have a wide range of calls in this territory. Fire, EMS, being close to Warner Park, Cherokee Marsh, and the people,” he said. "The people, in my opinion, are what makes the station and makes the territory.”

Without a doubt, Lucille loved this job and enjoyed every day with the Department. So why retire?

“Life is too short. I can still hop around, play baseball, softball… and I appreciate what I have,” he said, remembering something his grandmother used to tell him. “'Tomorrow’s not promised to you.' It’s very true."

His contributions to the MFD will be missed— not the least of which are his skills as a firehouse chef! His crew at Station 10 will have to get by without the delicious hot wings, chocolate cheesecake, and key lime pie Lucille was famous for.

And he doesn’t retire alone. His wife, Sherry, steps down as a counselor at Madison's Memorial High School after 28 years there.

“We’re both going to ride off into the sunset,” he said with a smile.

In addition to traveling, the couple has a house in Jackson, Mississippi they plan to visit during the wintertime.

“I notice that as I get older I don’t like the cold weather!”

Ever practical and much more interested in personal conversations than thumb-typing on social media, his friends at the MFD know if they want to keep in touch with Lucille, they’ll just have to do it the old-fashioned way.

“I haven’t looked at email in months. Why? Because I just don’t care,” he said, clasping his flip-phone. "My cell phone was made in 1999 and still going strong. People keep saying, ‘John, why don’t you upgrade to something ten years old?’ I say, ‘No, I like my Motorola.’”

Lucille says he’s met a lot of great people over the years and will surely miss them outside the fire station. Retiring with no regrets, Lucille concludes, “This is all I hoped it would be. It’s been a great ride.”

Take it from someone who spent most of his career behind the wheel of a fire truck — an actual dream come true.

This content is free for use with credit to the City of Madison - Fire and a link back to the original post.
Category: General, Station 5, Station 10
Tags: Meet the MFD