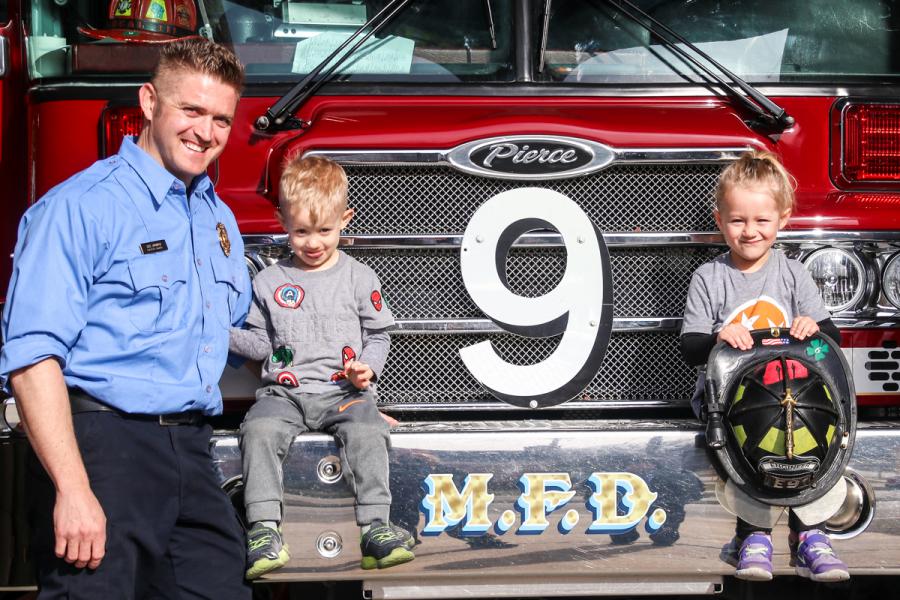 Where are you stationed?
I'm at Station 9 (Midvale Blvd.) on the 'A' shift.

What do you like about your station and/or the territory?
I have served eight out of my nine years with the MFD at Fire Station #9. In that time, I've gotten to know the territory quite well, which is very advantageous for the Engineer. Familiarity helps greatly when it comes to routes to the emergency scenes, building layouts, hydrant locations, and tactical assignments, which all contribute to operating an efficient emergency scene and safety for my crew. I also live in Fire Station 9’s territory, which is great for my family (#1 in my heart), who visit often. My kids love interacting with my crew, whom I consider to be my extended family.

How has your perspective changed now that you're an Apparatus Engineer? Do you see your role in a new way?
The Apparatus Engineer role is quite different than the other roles within the MFD. Simply put, the Engineer needs to do their job first so the other members of the crew can do theirs. In order to successfully serve the community, the EMTs and Firefighters need to arrive at the emergency scene safely and quickly. I take a great deal of pride in the trust my crew and community have in me to get that done.

Why did you want to be an Apparatus Engineer?
My father was a 30-year member of the Eau Claire Fire Department. Experiencing several different ranks, he has said numerous times that the Driver/Engineer role was his favorite role, and it greatly utilized his talents. Now, I can completely understand why the Engineer was his favorite. My father, who is basically a human GPS for the Eau Claire area, is now retired from the Fire Department and is driving school bus for the School District. I hope to one day reach a level of familiarity with Madison that he has for Eau Claire.

This content is free for use with credit to the City of Madison - Fire and a link back to the original post.
Category: General, Station 9
Tags: Meet the MFD