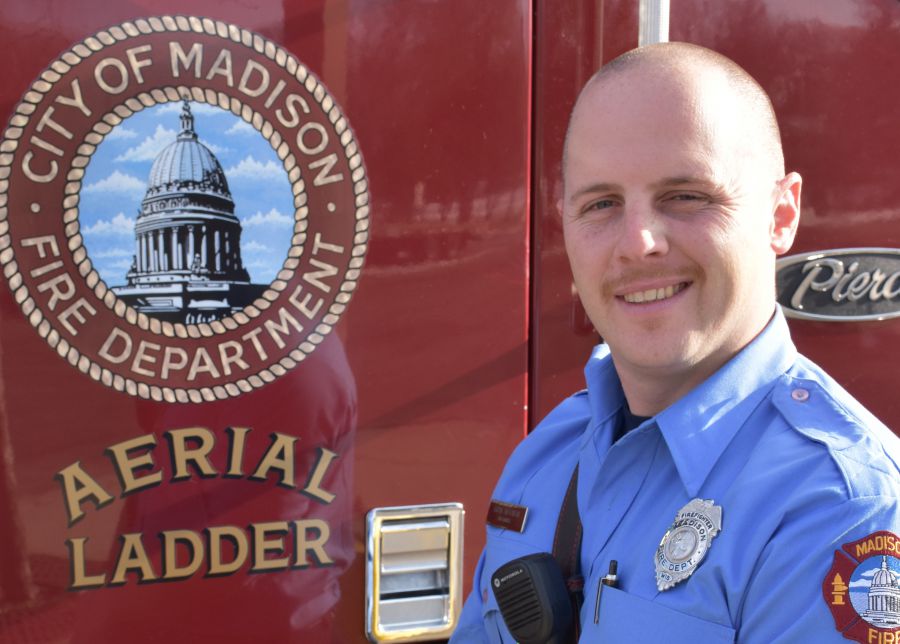 Eighteen new firefighters graduated the MFD Fire Academy on November 6, 2015. We introduce them to you on the MFD Blog throughout December.
Current station assignment:
Station 8 (Lien Rd.)
Why did you want to be a firefighter?
​I grew up near a firehouse and went to elementary school across the street from one as well, so I was constantly exposed to "fire trucks" from a young age. Over time, my interest evolved from thinking primarily that lights and sirens were cool to developing an interest in what the career actually entails... variety, excitement, hard work, and most importantly, helping people solve the problems that they cannot take care of on their own.
Why did you want to serve in the city of Madison?
​I have always loved spending time in Madison, from my times visiting as a child and throughout high school and college, to the time I spent living here after college. This community offers a great environment where anyone can find their niche, and there is always something to do. The Madison Fire Department has been my career goal since I started in the fire service. The department is highly regarded statewide not only because of the great work that the firefighters do, but because the community and the municipal leaders have historically done an excellent job of supporting the department and providing the resources for the department to fulfill its mission.
What has been the most rewarding part of your experience so far?  ​
There have been many. Having the opportunity to bond with new friends and co-workers has been rewarding... from my fellow recruit classmates to my Firehouse #8 crew. The most rewarding experience for me, though, has been having the chance to help out in the Madison community. Whether by responding to emergency calls and public education events while on duty, or by getting involved in Local 311's charitable and service activities while off duty, there is no shortage of opportunity to be involved and engaged in the local community.
Looking back at the Fire Academy, what was the most challenging element?
​The fire academy as a whole was challenging. There was a ton of information, many drills and evaluations, and lots to learn in a relatively short period of time. The pace was quick, but having a cohesive team of recruits helped us get through it together.
What advice would you give to someone hoping to join the MFD?
Stick with it. Work hard. Better yourself in the meantime.
MFD was the first career fire department that I ever applied for. In the time between that hiring process and the one from which I was hired, I spent almost 12 years working for two other fire departments. Working for those departments, the Maple Bluff Fire Department and the South Milwaukee Fire Department, allowed me to work with and learn from many great firefighters, paramedics, and officers. Those departments also allowed me to train, learn, practice, and develop my skill sets. Having the benefit of those experiences has allowed me to hit the ground running here in Madison.

There are many places to volunteer your time, both as a firefighter and outside of the fire service. Take these opportunities. Practice talking to and interacting with people... not just your friends, but strangers, customers, etc. Ask questions and listen and learn from the answers.

Once again, stick with it. There are many applicants for few jobs. Just because it doesn't work out one time doesn't mean it won't work next time. The people in that testing room that are out there working hard and bettering themselves are the ones that are putting themselves in the best position for eventual success.
This content is free for use with credit to the City of Madison - Fire and a link back to the original post.
Category: General, Station 8
Tags: Meet the MFD