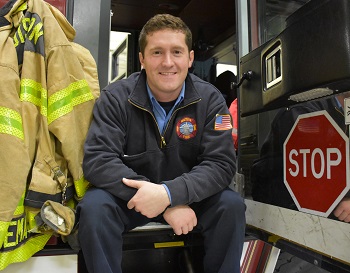 Eighteen new firefighters graduated the MFD Fire Academy on November 6, 2015. We introduce them to you on the MFD Blog throughout December.

Why did you want to be a firefighter?
When I was young I had a friend who was on the fire department in my home town. After first meeting him, he quickly became my mentor. Throughout high school he guided me with his passion for the job and his level of integrity in his life. Because of him, my career goal was to become a firefighter.

Why did you want to serve in the city of Madison?
I wanted to work with the Madison Fire Department because, above all else, they always put the public first. I wanted to work for a team, and I see that with MFD.

What has been the most rewarding part of your experience so far?
For so many years I've been passed by fire trucks driving around. I would always look at the faces of the people riding in them and think how lucky they were and how bad I wanted to be them. Now I am on the other side of the glass, looking out at people as I pass by them... in the fire truck. :)

Looking back at the Fire Academy, what was the most challenging element?
Knowing how easy it was to replace me. If I fail, there were always thousands of people that were able to take my spot. I always used that as a motivation. There is nothing special about me, and I deserve to be here just as much of anyone else. As long I never gave up, I knew I would make it through.

What advice would you give to someone hoping to join the MFD?
"If you think you’re not good enough, you'll be surprised how good you are if you don't give up."
This content is free for use with credit to the City of Madison - Fire and a link back to the original post.
Category: General, Station 10
Tags: Meet the MFD