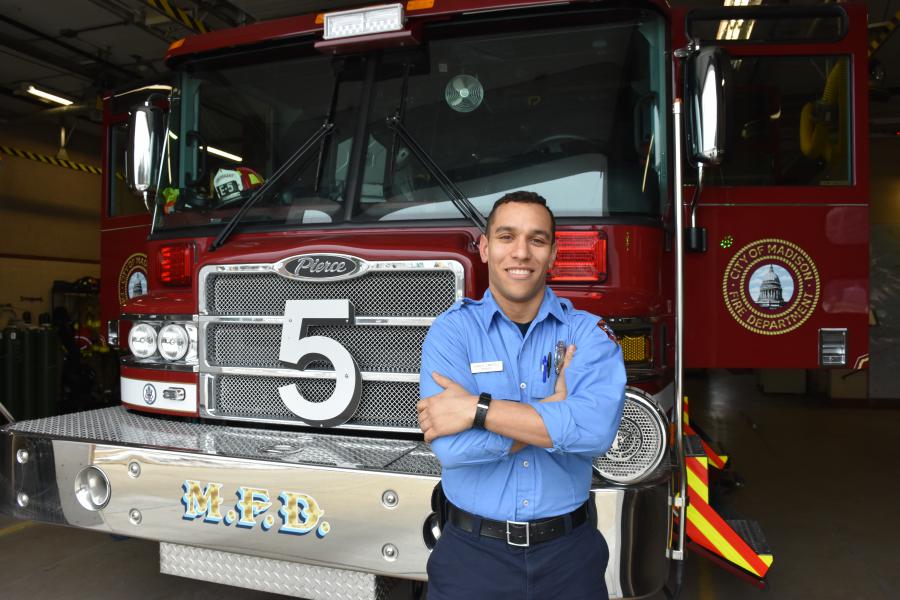 Where are you stationed?
I'm at Station 5 (Cottage Grove Rd.) on the A shift.

Why did you want to work in Madison, for the Madison Fire Department?
I was born and raised in Madison, so I've seen firsthand the impact this department has on the community. The work environment is among the best I've been a part of, as well as the department's reputation, and it shows. Great training, even better people, and I'm working for the city I grew up in. What more could I ask for?

What has been the most rewarding part of your experience so far?
The most rewarding experience so far is tough to hone in on, but I would say it was about my 4th or 5th shift at the station. Our doorbell rang and there was this kid, about 4 or 5 years old, with his dad. The dad explained they had been at the laundromat next door and the kid wanted to come "see the fire truck." As the rookie, I showed the kid around the engine, showed him the compartments, let him poke around and then he found my gear. Upon finding said gear, he started asking me about it. I'd show him something, and with the biggest grin, he'd shout, "You gotta put it on!" So I'd put on whatever I was showing him and explain its purpose. Before I realize it, I'm in full turnout gear with my pack on!

To me, so far anyway, that has stuck out as the most rewarding moment on the job. I don't think he stopped smiling throughout the entire tour. As somebody who has been in that kid's position, it really hit home how fortunate I am to be here.

What advice would you give to someone hoping to join the MFD?
The only advice I would give someone trying to join MFD is to ask yourself why you're following this career path. Don't come up with some cookie-cutter answer you think people want to hear-- really figure out why you want this because whatever the reason (or reasons) is, it will be the driving force behind your aspirations. If you can't give a clear and concise answer on why you want to be here, you won't. Think about it, be authentic, and remain humble.

This content is free for use with credit to the City of Madison - Fire and a link back to the original post.
Category: General, Station 5
Tags: Meet the MFD