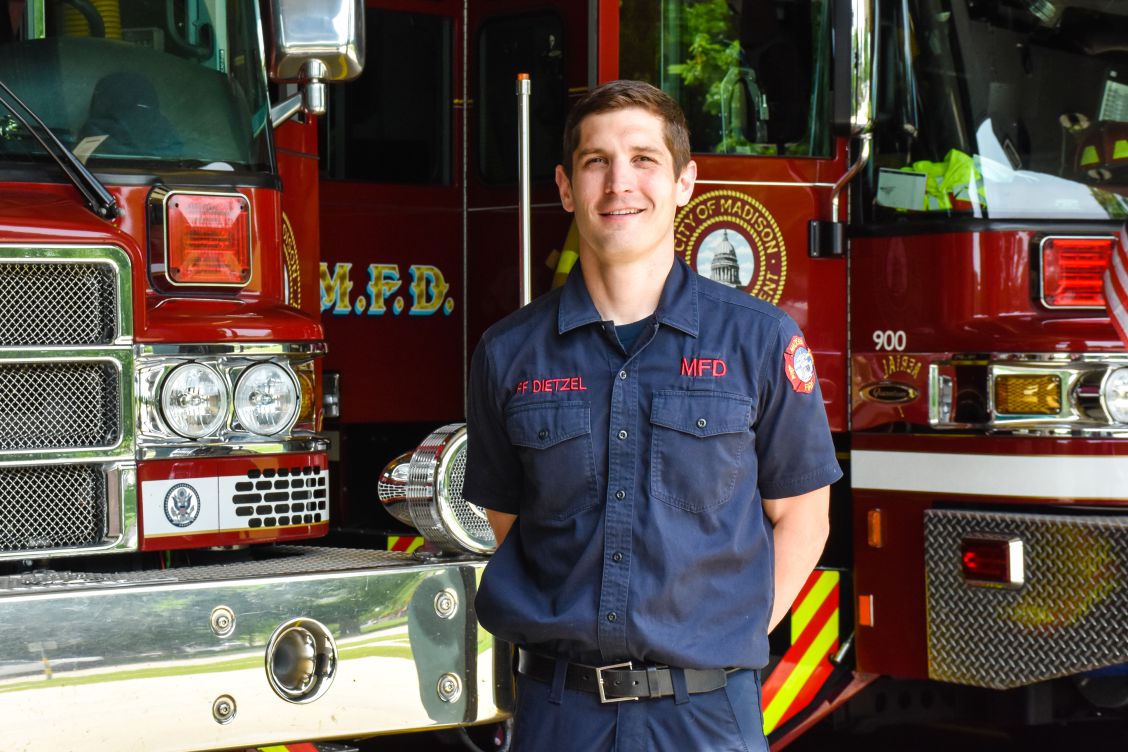 Where are you stationed?
I'm at Station 7 (McKenna Blvd.) on the 'B' shift.

What attracted you to this career?
I graduated from the University of Iowa in 2010. I had a blast, but as soon as I got out of college and started looking at other jobs I would do with my Finance degree—sitting at a desk, cold calls, bank stuff—it didn't sound good to me. I've always been the "get your hands dirty" type.

I got into EMS in order to serve at the Dubuque Fire Department; you had to be a paramedic to get on the department. So while going into EMS was almost like a hurdle to get on a fire department, once I did it, I really liked it. I like the variety of this job and helping people.

What are among the most memorable experiences you've had so far at the MFD?
The fires are not frequent, but the way in which Madison Fire works proficiently on a fire is remarkable. Having done volunteer work and smaller-city stuff, the amount of know-how in every apparatus is pretty remarkable, as well as the amount of resources, equipment, and people we have. It's great to be part of a team that works that well; it's easy to have pride in something that works that well. If we can fix it, we will fix it.

Having the chief come out and have lunch with us and have him be one of us was also memorable. And getting to know other members of my crew. It feels like I should have been around here longer for as well as I know them!

Medical responses are an important part of the service we provide. What have been the most challenging and/or rewarding aspects of these calls for you?

So often when you’re on the other side of it, you know that time doesn’t matter or that whether a certain skill gets done a certain way doesn’t matter. But when it does matter, and you’re able to call on that skill, and you have it down, and it’s the right time, right moment, and you execute it, that’s really rewarding.

That’s also the hard part of both fire and EMS: maintaining the discipline to keep all those seemingly rusty skills sharp so that when it presents itself you can accomplish it.

What advice do you have for someone hoping to join the MFD as a firefighter/EMT?
If you want it, don’t ever count yourself out. A lot of places say they value a diverse group of people and they don't walk the walk, but at this place there are people who are well over 40 when they get hired, people with no experience, people who are under 20, men and women, and people with all kinds of experience, from accounting to forestry to firefighting.

If you don't get it, make sure you still tried as hard as you could. I would really stress that the lack of experience should not be a reason to not apply. A lot of people get hired without it.