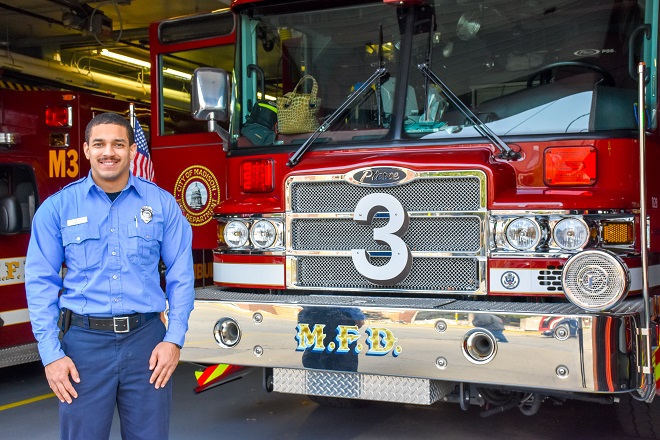 Where are you stationed?
I’m at Fire Station 3 (Williamson Street) on the B shift.

Why did you want to pursue this career?
I wanted to pursue a career in the fire service so that I go to work every day with the hopes of doing my best to make somebody’s day at least a little better. I like knowing that when somebody is having the worst day of their life, we’re the ones they call to come make it a little better.

Why did you want to work in Madison, for the Madison Fire Department?
I originally moved down to Madison from Wausau in order to go to school for fire science. While living here, I slowly fell in love with the city and the diversity of people living here. Ever since I moved here years ago, I couldn’t imagine myself working for any other city.

What has been the most rewarding part of your experience so far?
So far, my most rewarding experiences have been showing off Engine 3 to young children in our territory. I enjoy interacting with the community I serve, and hopefully I can inspire the youth to consider the fire service as a career.

Looking back at the Fire Academy, what was the most challenging element?
Looking back at our Fire Academy, the most challenging element for me was to be constantly communicating with everybody on my crew to make sure I was doing what I was supposed to be doing, and vice versa. A lot of the time, while doing tasks, you might just assume that somebody near you is doing what they're supposed to, but it was instilled in us to always communicate and know where your crew is.

What advice would you give to someone hoping to join the MFD?
Apply as soon as possible and be patient. Stay hopeful until the very end. Our class was hired from the third band in our hiring process, so it was a long road of uncertainty. Finally, physically and mentally prepare for the job as much as possible. The fire academy and the job will push everybody to their limits.

This content is free for use with credit to the City of Madison - Fire and a link back to the original post.
Category: General, Station 3
Tags: Meet the MFD