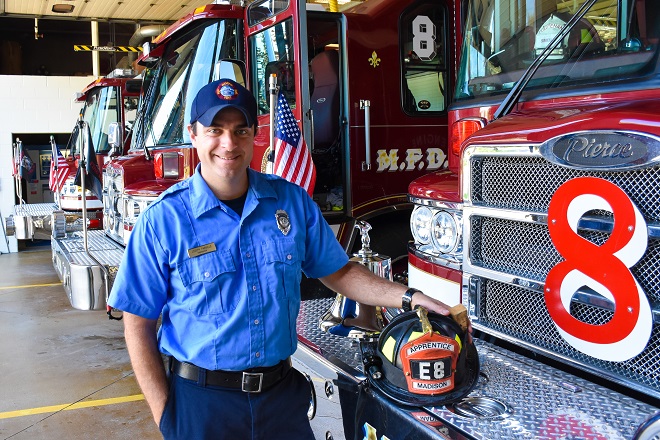 Where are you stationed?
Station 8 (Lien Road) on the A shift

Why did you want to pursue this career?
I've always been a "people person" and love to interact with others. I wanted a career where I knew I would do some good for the community and make a difference after I left. I was looking for a career where every day was not the same but would always keep me passionate about what I did.

I first started down the fire side after farming my whole life. I soon became an EMT, then decided to further my EMS career and became a paramedic, where I fell in love with EMS. It's a way for me to make a real difference in people’s lives when they're having their worst day. I also love the adrenaline rush you get from running fire calls.

Why did you want to work in Madison, for the Madison Fire Department?
When I was testing for many different departments, one of my friends said to apply to that one department that would be my dream job if I could go anywhere. That was easy for me to answer.

I always enjoyed going to Madison as a little kid and loved this city. I wanted to work in a large city where it would be very busy. I've always been the type of person who cannot just sit around. I always had to be busy working on projects.

The special team aspect drove me to MFD as well. I was big into rock climbing in high school and was an active member in the Rock Climbing Club. I wanted to be on the Heavy Urban Rescue Team and was lucky enough to be stationed at Station 8 on the HURT.

What has been the most rewarding part of your experience so far?
Living in Madison and serving the city my family now calls home.

This content is free for use with credit to the City of Madison - Fire and a link back to the original post.
Category: General, Station 8
Tags: Meet the MFD