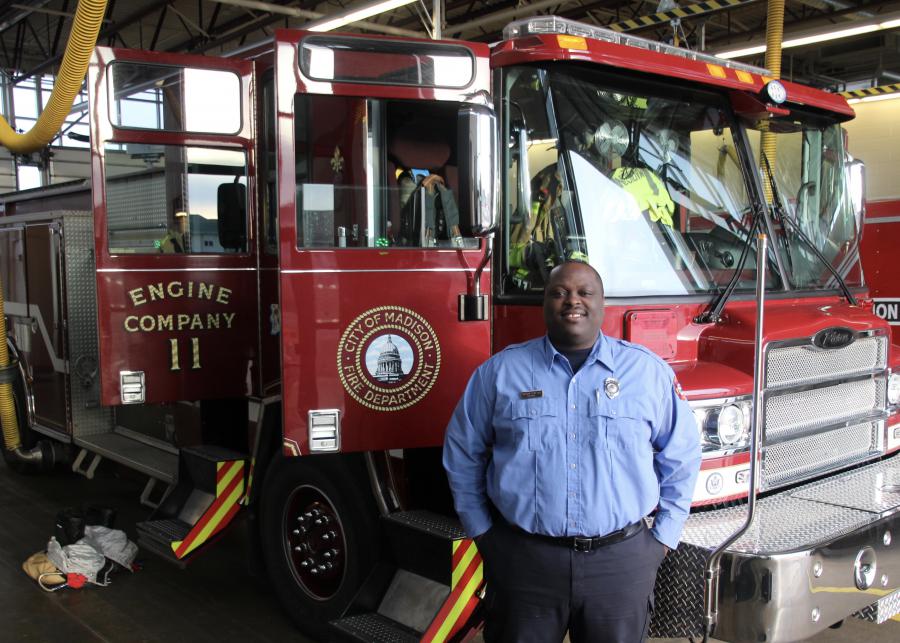 Where are you stationed?
Station 11 (Morgan Way) on the B shift.

Why did you want to pursue this career?
I wanted a rewarding career and something where I feel like I’m giving back to the community that's supporting me. I like the physical aspect of the job, the camaraderie of the firehouse, and being on the team again. Being in athletics, I appreciate being the member of a team working toward a goal. That’s one of the things that attracted me to the job, along with the time you have to spend with your family. I have two young children, and I’ll be able to see them grow up. And they can tell the other kids at school, “My dad’s a firefighter!”

Why did you want to work in Madison, for the Madison Fire Department?
I’m originally from California, played football for the Badgers from 2002 to the 2004/2005 season, then played professional football and started coaching football before moving to Madison with my wife, who works at the UW. I wanted a good job, something I can be proud of. I bumped into one of my Badgers football teammates, Lt. Matt Mialik, and he told me about the hiring process at the fire department. I was a stay-at home dad for a year, and the second time the hiring process came around, I put my application in and got in!

What has been the most rewarding part of your experience so far?
Feeling like you accomplished something. The whole process was a long, stressful process, and it's nice to finally be able to accomplish something and know that I'll be able to save lives and be a good example. Things like that are important to me. I feel like I’m part of a team again and doing something positive.

Looking back at the Fire Academy, what was the most challenging element?
Learning the terminology and putting on all the gear. I don't have any previous fire experience, so I had no idea what anything was. It's like learning a whole new thing as far as fire behavior, lifesaving tactics, saving my own life if need be. It’s something totally different from anything I've done before.

I like challenging myself, and the Academy was challenging. It was more challenging than any training I’ve ever been through; I’ve been through NFL training camp, and that wasn’t as hard as the Fire Academy. I was an offensive guard, and in football you play hard for 10-12 seconds and then rest for 30 or 40. It's not like that at the Academy. It’s high-intensity, and it’s serious. It’s life or death. We’re not playing a game. There are no replays when you’re dealing with somebody’s life. You can’t say, “Can I try that again? I didn’t get in that window quite fast enough.”

What advice would you give to someone hoping to join the MFD?
Don't give up. Learn as much as you can. It's a long process, as far as the interviews, and don't think you can't do it. If you're a person that likes challenges, likes to learn new things, and if you don't want to be chained to a desk, then you should do it.

Before I was working here, I was collecting taxes—I was a revenue agent knocking on people's doors. It wasn't something I wanted to do with my life. This is a rewarding profession and I feel like it matters. Your whole job is to help people, and not everybody gets a chance to do that in their life. If you want that opportunity, if you want to try something new, want to push yourself or test your limits, I feel like this is something you should do.

This content is free for use with credit to the City of Madison - Fire and a link back to the original post.
Category: General, Station 11
Tags: Meet the MFD