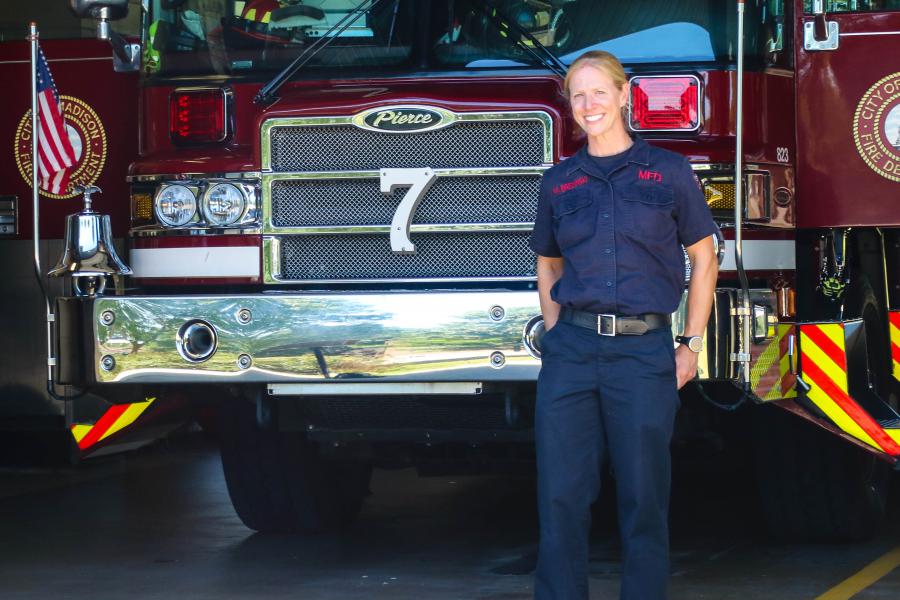 Recruit Class 9 is now serving at a fire station near you! Get to know Madison's newest firefighters.

Where are you stationed?
Station 7 (McKenna Blvd.), 'A' shift

What were you doing prior to joining MFD?

I was an American Sign Language interpreter at an elementary school. I had also interpreted for the Kids In the Rotunda program at Overture Center for a number of years. I also volunteered on the Middleton Fire Department.

What was your first day in the station like? Did you catch any memorable calls?

There was a woman who had cut an artery on some glass. I remember being in the med unit and there was a lot of blood, and the medics said to her, "There's good news and bad news. Good news is we have an extra person in here. Bad news is it's her first day." That was kind of funny. The patient was great about it. Clearly the medics had everything under control, but once again, it was my first day and I had a lot of support.

What is the most challenging and/or rewarding aspect of the EMS side of the job?

The most challenging aspect is when there's a language barrier, because I feel frustrated that I’m not able to communicate and be receptive to the patient's needs as much as I would like to be.

I think the most rewarding part is simply being there and being calm and being able to help when somebody is experiencing an emergency. I like being able to provide medical attention, but it's the personal connection and humanizing it that I enjoy.

What advice would you give to someone hoping to join the MFD?

Keep trying. Don't give up. It's a phenomenal organization. Get involved in your city in as many ways as you can—and your community. Make a difference in any way that you can. Have perseverance. Be willing to go the extra mile.

Feel free to share any other stories or "fun facts" about yourself that we didn't ask!

I'm a single mom to three boys and I like to joke that I became a firefighter so that they would think I’m cool, but that’s not the whole story. I got my first taste of the fire service when I was a volunteer firefighter on Middleton Fire Department. I knew early on after starting there that this was something I could do and love for a long time. I won the lottery with this job! I'm waiting to use my ASL on a call. There's going to be a day when it'll be needed and I hope I'm on shift and will be able to help facilitate communication. Because let me tell you, that French language course I took in school hasn't really come into play yet…