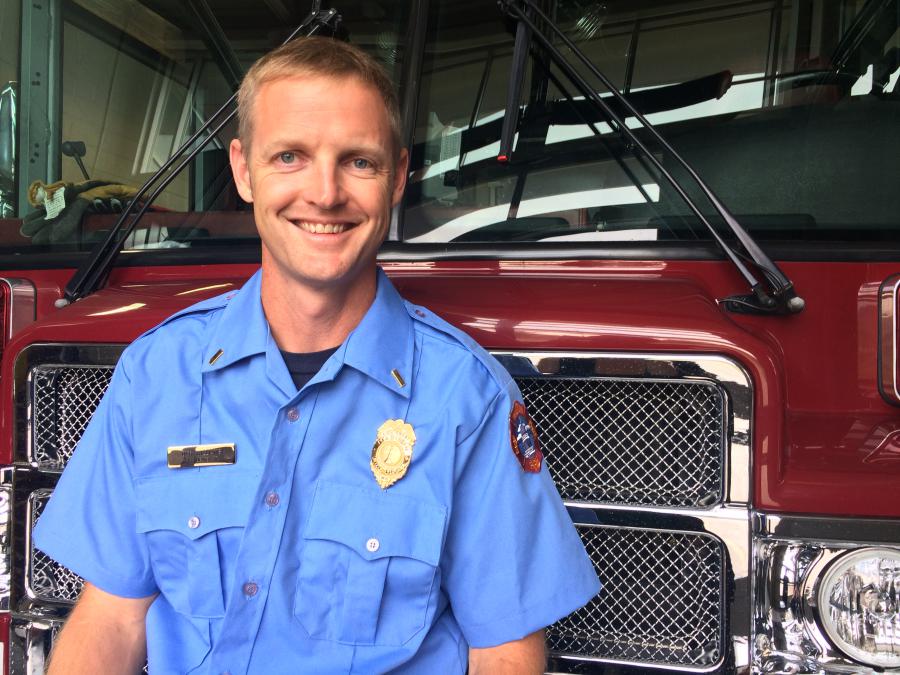 Where are you stationed?
I'm at Station 12 (South Point Road) on the 'C' shift.

Where were you previously?
I was a paramedic at Station 2 (Grand Canyon Drive) for a long, long time.

How long have you been with the MFD?
22 years.

What do you like about your station and the territory?
I was born and raised a westsider and worked most of my career on the west side, so I'm thrilled to be working on the far, far west side.

How has your perspective changed now that you're a lieutenant?
For the last 20 years, I've been a paramedic with a primary focus on patient care. So for me it's been quite an adventure taking a step back and not being the primary patient caregiver. Instead, I'm taking a look at the bigger picture of the scene and the crew's safety. I admit it was hard the first week or so-- I found myself kneeling down talking to the patient with the crew standing around me.

This job also involves more fire-based considerations, and that's also a change in my focus. We've all been firefighters, we've all been EMS providers, but I was so heavy on the EMS side before. Now it's energizing to strengthen my fire skills again. I'm loving getting out and training every day with my crew. They've been great and very supportive.

What's the most unique call you've been involved with or in charge of?
It was automatic ALS (advanced life support) response in rural Dane County for a cardiac arrest. When we got there, the volunteer EMTs were doing CPR and I looked down at the patient, and he looked up at me. I said, "Whoa, whoa, whoa, stop compressions. He's conscious." They stopped, and he went pulseless. They started compressions and he became conscious again. That was the most bizarre call for me-- to see someone who's CPR-dependent conscious. And it was taking place in a challenging rural location.

We called for Med Flight, and the same thing happened to the HEMS doctor. We emptied our medical bag of cardiac drugs, then Med Flight emptied their cardiac bags. They were unable to fly him in the helicopter because he needed continuous CPR. As the other ambulance transported the patient, we followed as the back-up pharmacy, and whenever they pulled over, we would run them some medications.

There was an incredible amount of teamwork in that call-- between the volunteer EMTs, Med Flight, and the MFD-- not to mention such a unique patient presentation. The patient did survive that incident but passed away a few years later.

What do you do when you're not working at the MFD? Do you have hobbies, specialties or hidden talents?
On my day off I like to spend time with my two children and work to promote the regional trauma system, making sure traumatically-injured patients in the 14-county region receive top-notch trauma care.

I'm also the Tactical EMS (TEMS) leader and coordinator. That's been rewarding-- to get TEMS off the ground and to work with the Madison Police Department, Madison Fire administration, and Fire Fighters Local 311 to bring an extra layer of protection to the police and public during high life hazard situations. I'm keeping my paramedic license so I can continue to work with TEMS.

This content is free for use with credit to the City of Madison - Fire and a link back to the original post.
Category: General, Station 12
Tags: Meet the MFD