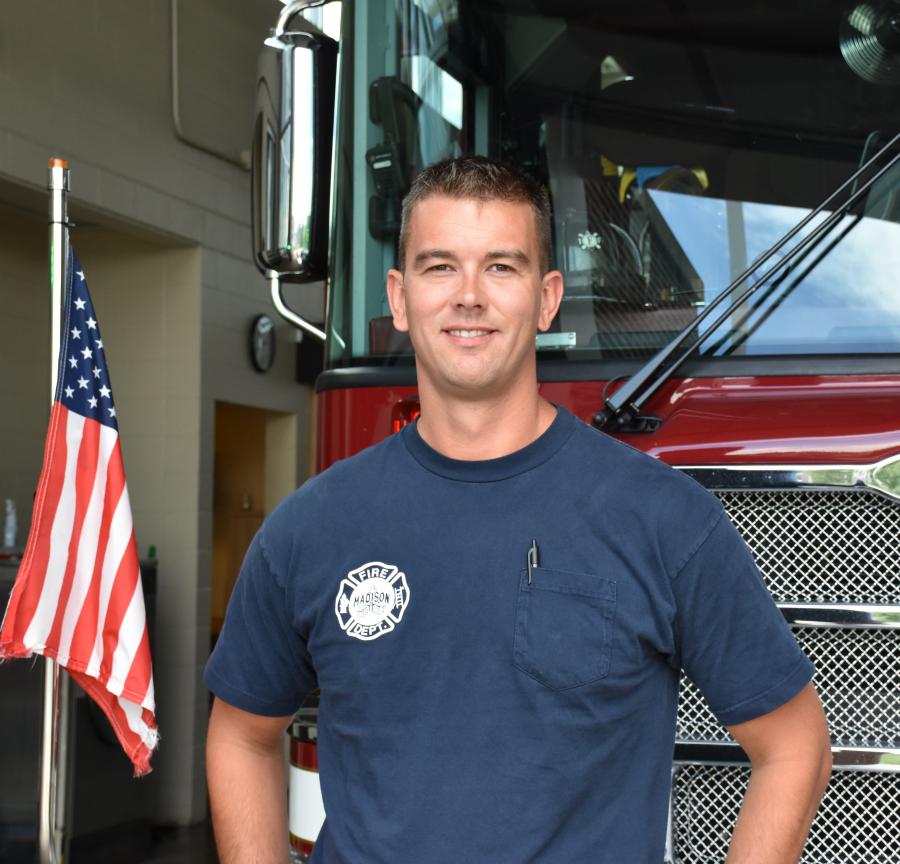 Where were you previously?
I was an Apparatus Engineer at Station 1 (W. Dayton Street).

How long have you been with the MFD?
I’ll be wrapping up my 12th year with MFD in October.

What’s unique about your territory?
Coming to Station 11 from downtown, it’s a lot more residential here with single-family homes, assisted living places, plus we have American Family complexes, hotels, UW Health at the American Center, and we’re second due to East Towne Mall.

We also cover the Town of Burke now, where there are no hydrants and really long lays, and we often go to Sun Prairie, so you have to know how to switch to Sun Prairie’s channels on the radio in order to talk with them. We've been going out to Highway 19, which consists of narrow roads. It’s very different from what I'm used to.

This is a growing area, and it’s going to continue to get busier as more people move out this way. There's going to be a lot more activity here than there was 5 or 10 years ago.

What surprised you most when you took on this role?
All the different things you're trying to think about: Where the call is, how you're going to get there, helping the Apparatus Engineer (AE) navigate the traffic conditions, which way the ambulance is coming from and how far out they are.

As a driver, I worked really hard at knowing the territory. I wanted to get us to the call, get us there safely, and then do what the lieutenant asked us to do because they already have a lot to think about. As a lieutenant, all this stuff is going through your head. There's a ton of responsibility.

And now people are calling me "Lieutenant," which seems weird...

What's the most rewarding aspect of the job for you?
Being able to help somebody. That's the best part. One day while I was an AE at Station 6, somebody in the parking lot behind us had a flat tire. We all went out there and helped them change their tire. When people are really appreciative, it really makes you feel good and helps you realize how important this job is.

Is there anything else you’d like to share?
I'm thankful to have the officers and co-workers that I've had. I've basically been at Station 1 my whole career, and at Station 6. I’ve been a firefighter, paramedic, AE, and a Chief’s Aide, so I’ve been able to see all aspects of the job, but I've really enjoyed the people. I've been fortunate to have great crews, really good officers, and I just try to learn something from them every day, whether it's something about the job or about people. I appreciate the officers who gave me the opportunity to advance my career. Whenever I've needed help, I've been able to just ask someone who will help me, guide me, show me. I’ve enjoyed every position I've been in, for the most part. It was hard to give up any of them.

This content is free for use with credit to the City of Madison - Fire and a link back to the original post.
Category: General, Station 11
Tags: Meet the MFD