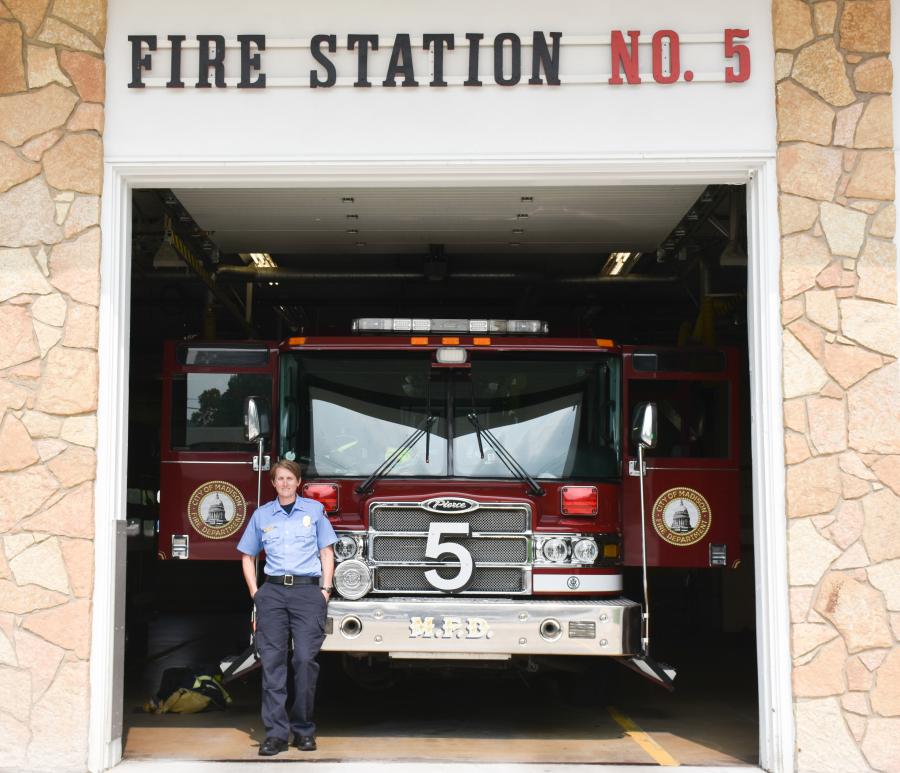 Where are you stationed?
I’m at Station 5 (Cottage Grove Road) on the ‘A’ shift.

Where were you previously?
I was a firefighter utilized as a paramedic on Engine 9 (Midvale Blvd.) since January 2016, and prior to that I was a paramedic at Station 5 on the ‘A’ shift.

How long have you been with the MFD?
19 years.

What do you like about your station and the territory?
I work with a really great, awesome crew. I also like the mix of things in this territory. It's big— there’s a lot of residential, commercial, and industrial property. You get Stoughton Road, you get the Beltline, and as far as medical calls go, we really get to use our skills. That's why being a paramedic here was so interesting.

How has your perspective changed now that you're a lieutenant?
We go to Woodman's every day, but rarely do you think about what you’d do if Woodman’s is on fire, or think about where the hydrants and Fire Department Connections are. Yet we're there every single shift. So I find myself looking at things differently in that way— taking the common places we go every day and thinking, "What if there were a fire here? Where's the Knox Box key?” and so on.

After being a paramedic on the ambulance for 13 years, I find myself changing my whole mindset and thinking I'm now responsible for all these six people. It’s not just about me and my day and what’s going on, but thinking first about everybody else. When you go on a medical call as a paramedic, you get the patient information, package the patient, and take them to the hospital, but now from a Lieutenant’s perspective, it’s totally different— making sure everybody’s okay, everybody’s safe, and looking at the big picture. You look at the patient's house differently. Is the stove off? Are the pets taken care of? Are the lights on or off like the occupants want them to be? It's a completely different job and different mentality.

What's the most rewarding aspect of the job for you?
It's the privilege of helping people, realizing it's a big deal for them, and that we are doing something good. Some things might seem like "just another call," like a fire alarm where someone needed a new battery. For us, even though it’s routine that someone needed a new battery, that person had no idea what was going on and was scared that something was wrong in their house. We gave that person the peace of mind and let them know that they're safe.

When you think back and reflect, you realize it's an amazing thing we get to do every day. It's more obvious on the big calls, but it's just as meaningful on the small calls, because for them it's their emergency and it's a big deal. Sometimes they make it known that they're super thankful, and you can tell they're appreciative, so that's rewarding.

This content is free for use with credit to the City of Madison - Fire and a link back to the original post.
Category: General, Station 5
Tags: Meet the MFD