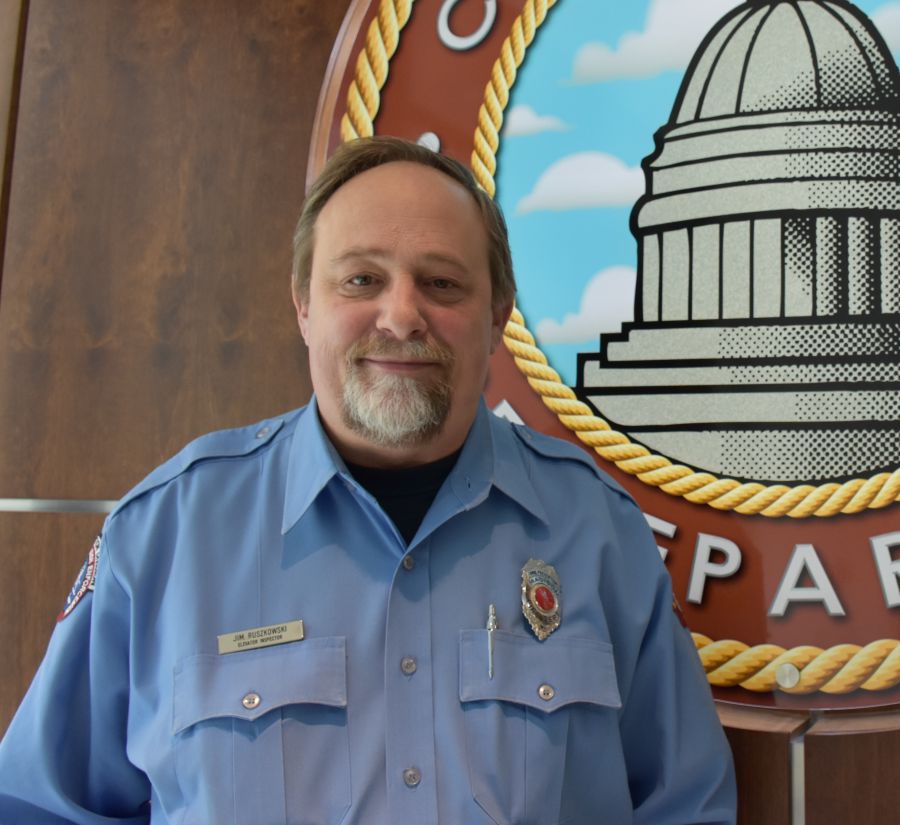 Oftentimes people step onto an elevator, escalator, or other conveyance without taking a moment to think about how it got there or who made sure it was safe.

That's where Jim Ruszkowski comes in.

He retires from the MFD after seven years as an Elevator Code Enforcement Officer in the Department's Prevention Division.

Ruszkowski worked as an elevator constructor for almost twenty years before he decided his career needed a lift.

With a job that required him to be on the road a lot, he knew he needed something that would allow him to be closer to his family.

He worked with the National Electrical Installation Standards (NEIS) for a few months before the Madison Fire Department posted a job opening for Elevator Inspector, which he eagerly pursued.

As a code enforcement officer, Ruszkowski focused on new constructions and annual inspections of existing conveyances. He had an eagle eye for compliance to safety standards as he helped businesses and homeowners install new conveyances-- including platform lifts, stair lifts, dumbwaiters, escalators, and elevators. He further ensured businesses hired an elevator company to perform regular maintenance in between his annual check-up visits.

His commitment to safety meant thousands of people each year could confidently use these mechanisms without fear of them breaking down or causing injury.

In his two decades in the industry, he’s met people afraid of getting stuck inside the giant moving metal box, but he says there's very little to worry about.

If you find yourself in a stalled elevator, he has simple advice: "Just sit there, relax. You'll get out as fast as somebody can get there.”

Ruszkowski dedicated his career to making sure such things don't happen under his watch. On new inspections, he double- and triple-checked hydraulics, pressures, cables, and belts. Elevators were run at full speed, simulating over-speed conditions to confirm the elevator stops properly.

What he’s loved most about working at the MFD was working directly with the firefighters.

Once based at Fire Station 3, he says both the elevator inspectors and firefighters benefited from collaborating with one another.

“We learned a lot from the firefighters — and we taught them some things about elevator rescue,” he says.

The inspectors occasionally joined the firefighters when they were dispatched to help someone from an elevator.

With retirement on the horizon, Ruszkowski will clear from his docket approximately 1000 inspections per year. But he’s not done yet.

"I’m too young!” he says with a chuckle. "I’m still going to keep my fingers in inspecting, but I’m going to be doing things at my pace.”

Ruszkowski also looks forward to spending time with his family and the horses, dogs, and cats he and his wife care for on their small Reedsburg farm.

After he departs, the Elevator Inspection Unit at MFD will continue plugging away at the 3000 or so inspections and installations it sees annually.

"I enjoyed my short time with MFD," says Ruszkowski. "I wish the elevator program a big success."

This content is free for use with credit to the City of Madison - Fire and a link back to the original post.
Category: General, Station 3
Tags: MFD Prevention Division