In a ceremony held at the Olin Park Boat Launch on September 28, 2020, the new airboat was named for retired Lieutenant and Lake Rescue Team co-founder Craig Yapp. Yapp served the City of Madison Fire Department for 24 years, from March 1982 to March 2006. He played a critical role in the leadership and development of the MFD Lake Rescue Team from its inception in 1983.

“Yapper” saw its first call on March 1, 2020 after a man fell through the ice of Lake Waubesa on his snowmobile. The MFD Lake Rescue Team was dispatched to ensure the safety of the man after being exposed to the cold. 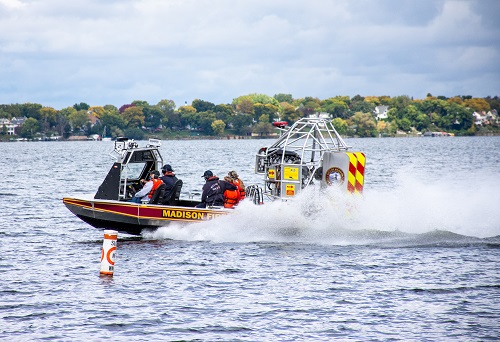 While the previous airboat was only a wintertime resource for the Lake Rescue Team, the new airboat has year-round capabilities. It can traverse water and ice conditions in the winter, as well as marshy areas and flooded terrain in the summer. It features a 427 ci LS7 650hp engine with Holley Dominator EFI system.

Measuring 8 feet wide and 20 feet long, "Yapper" allows up to six passengers on board at a time. Previously, only two rescuers would fit aboard the ice boat. Wireless headsets now allow Lake Rescue personnel to communicate with one another and with on-shore command, all while remaining connected to the department's dispatch communications system. A Garmin touch screen GPS mapping system shows the boat's exact location relative to important landmarks during a search operation, and the system also allows the team to mark areas they've already searched.

The airboat will reside at Fire Station 1 in downtown Madison, the home of the Lake Rescue Team.

This content is free for use with credit to the City of Madison - Fire and a link back to the original post.
Category: General, Station 1
Tags: Lake Rescue Team