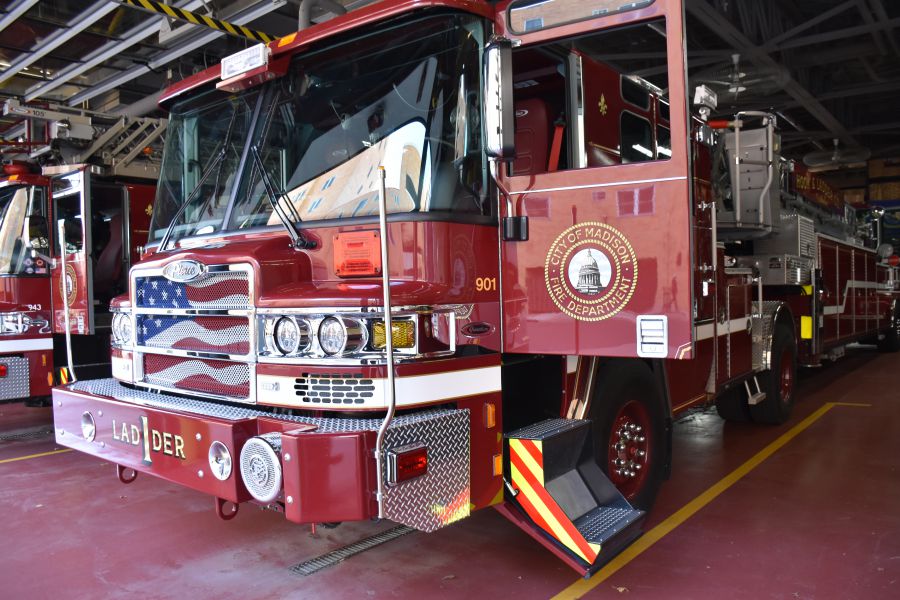 Now serving from Fire Station 1 in downtown Madison, this Ascendant 107-foot Heavy-Duty Tiller Aerial Ladder from Pierce Manufacturing in Appleton is believed to be the fourth tiller in the history of the MFD. It is the only one in service in the state of Wisconsin today.

Requiring two drivers— an Apparatus Engineer in the front and a Tiller Operator in the back— its tractor-trailer design allows greater versatility to navigate the hard-to-reach alleyways, courts, and cul du sacs of downtown Madison, which the previous Ladder 1, a 2011 Pierce Quantum straight truck, could not maneuver.

As high-rise buildings become a mainstay on the isthmus, vertical reach is more important than ever for downtown firefighters. The tiller's aerial ladder is able to extend 107 feet vertically, reaching an estimated eight or nine stories high.

Upgrading to the tiller aerial ladder has its environmental benefits, too. The apparatus’s lower profile protects the tree canopy along the streets. When our trucks can access tight courtyards, as the tiller can, fire code allows more trees to be planted in the neighborhood. Because it has no pump, its lighter weight also reduces fuel consumption.

The tiller does have a 1500 gallon-per-minute flow rate when flowing the aerial master stream via relay from another engine. Not having a pump means the tiller will operate more like a traditional truck company, has much more compartment space for specialized rescue equipment, and saves money on the overall production costs.

The acquisition of this tiller aerial ladder simply brings back old technology to meet today’s accessibility needs. The MFD’s first known tractor-drawn ladder truck dates back to the 1930s.

At least three decades have passed since the department last had one. This week’s debut is the culmination of months of training and preparation in the classroom and on the road. You’ll now see the new Ladder 1 serving from Fire Station 1 in the heart of downtown Madison.

This content is free for use with credit to the City of Madison - Fire and a link back to the original post.
Category: General, Station 1
Tags: Fire Stations, MFD Behind the Scenes, MFD History