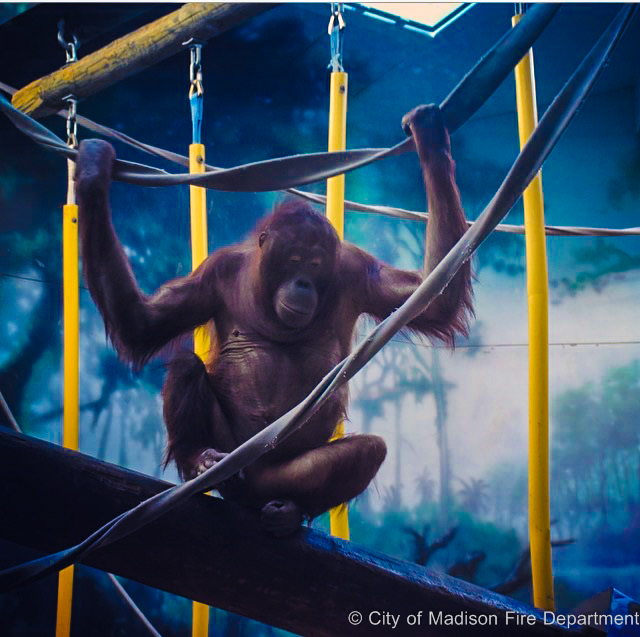 16-year-old Kawan takes hold of the line. With speed and precision she reaches forward, grasping to the ropes and slings with her hands and feet as her body swings upward. Seconds later she’s out of sight, hugging the skylights high above all who watch.

Kawan, an orangutan at the Henry Vilas Zoo, relishes the opportunity to show her fellow large primates that she can go faster and climb higher than all of them. She makes the most of their "jungle gym" built from hoses that were once used to save lives and property from fire in Madison and Dane County.

The Madison Fire Department is one of a handful of Dane County fire departments that have taken their old hoses to the Henry Vilas Zoo to be used for animal enrichment. The zoo began receiving regular donations of fire hose about six years ago. As their stock of hose increases, old ropes and other materials are replaced for the more durable rubber hoses.

Each year, the Madison Fire Department evaluates its fire hoses to ensure they could tackle the city’s biggest blazes on a moment’s notice. After years of use, it’s not uncommon for the hoses to develop pin holes or other deformities that render them unusable on a fire ground. That’s when it’s time to find them a new home.

Fire hose has proven to be a highly durable asset in zoos— and in the wild. In Borneo, hoses slung across rivers are reconnecting forests and encouraging population growth among endangered orangutans.

Building bridges and swings is just one way the Henry Vilas Zoo has utilized these tools to enrich the lives of its animals. Zookeepers have also sought the creative expertise of Hose2Habitat, a volunteer-run organization based in Maryland that teaches zoos to weave the hoses into perches, hammocks, feeders, and toys.

In addition to the orangutans, Henry Vilas Zoo's black-and-white ruffed lemurs, rock hyraxes, red pandas, and badgers all benefit from the generosity of Dane County’s fire departments. The newest beneficiaries are Sheela and Booger, a mother-son camel duo who were recently introduced to a brand new feeder packed with their favorite treat: Sweet potatoes. 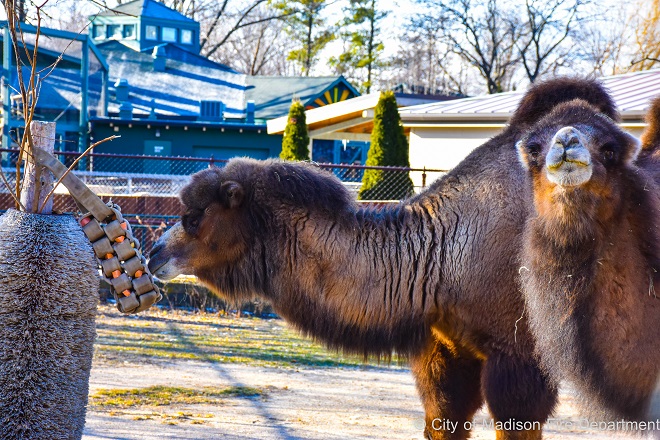 Scroll through the photos to see how your favorite animals are making the most of these new additions to their habitat!

Hoses in the primate exhibits make great swings, slings, and hammocks. Recent donations of hose will go on to replace the traditional ropes that are still in use. 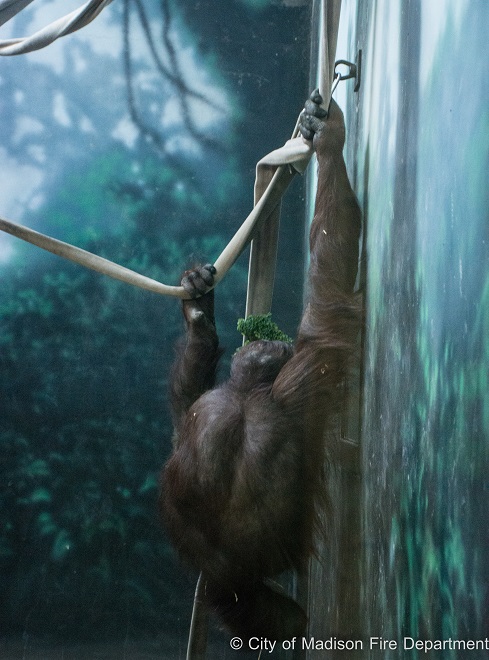 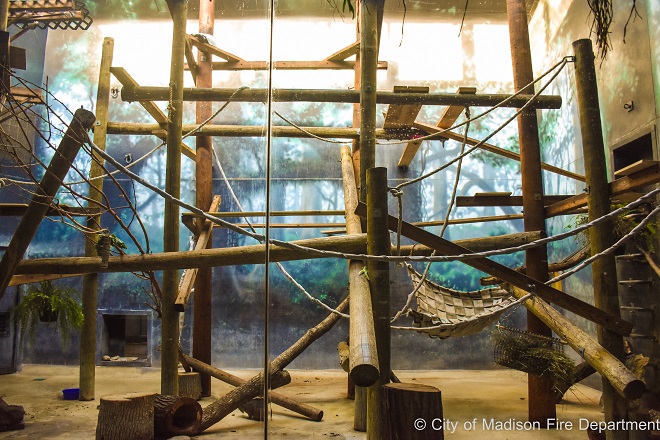 Hoses are also weaved into browse feeders where zookeepers can hide tasty treats like peanut butter and produce for the animals to enjoy. 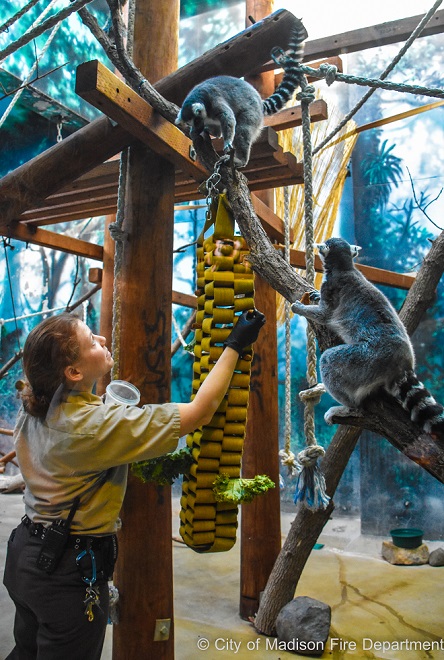 Tai the red panda (pictured here) and her friend, Terrai, dine on bamboo stuffed in their fire hose browse feeder! 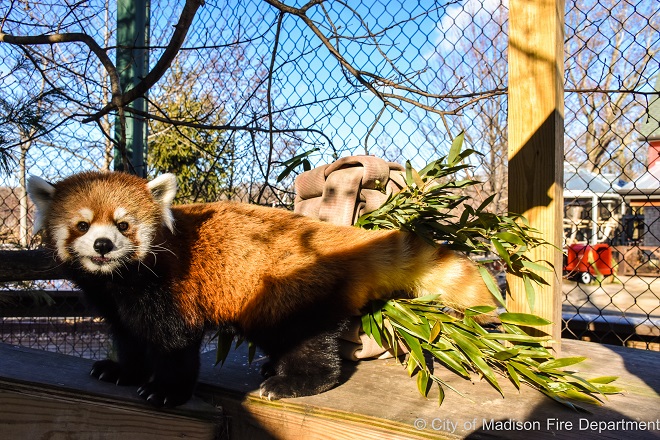 When the bison are out, they love to brush against and run through this curtain made from fire hose. 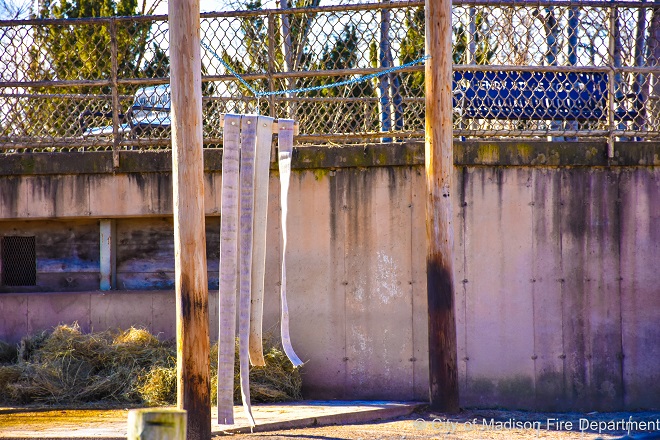 Bucky Badger plays with this ball made and filled with fire hose. Its weight gives him a good workout, and he'll be rewarded with peanuts! The Vilas Zoo plans to make similar balls for the otters to play with. They'll be filled with swimming noodles so they float in the water! 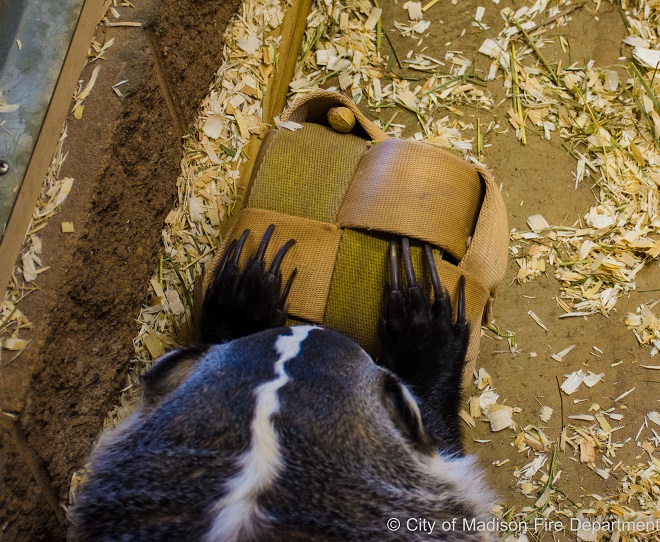 Visit the Henry Vilas Zoo's website to learn more about their animals and exhibits.

This content is free for use with credit to the City of Madison Fire Department and a link back to the original post.