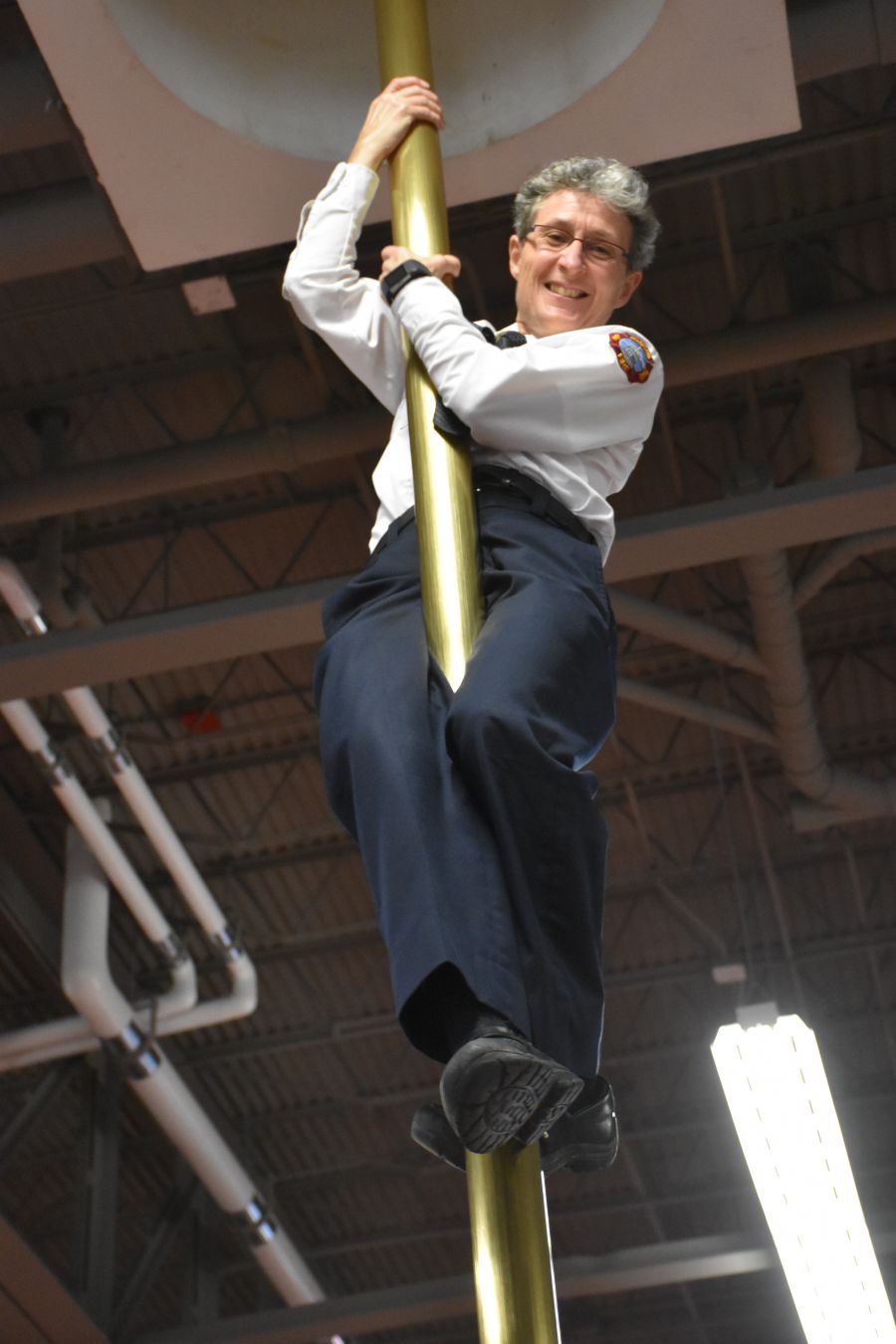 “I’m not done giving back to the community,” says retiring Assistant Chief Laura Laurenzi, who’s been serving the City of Madison since October 1988.

Her journey to the Madison Fire Department came on a road less traveled.

Laurenzi was eyeing up Law School at the University of Wisconsin while doing accounting work in Kenosha, hoping to move to Madison to be with her partner. She was also working some part-time jobs when she met then-firefighter Laura Agostini who encouraged Laurenzi to consider joining the Madison Fire Department.

“After one month on the job I thought, ‘Why in the world would I want to be an attorney?’” Laurenzi recalls. She never looked back.

She continued with her accounting education, however, and earned her CPA. The Fire Department schedule allowed her the time to keep her accounting skills fresh — skills that would prove to be beneficial to the City later on.

Laurenzi began her firefighting career at Fire Station 9 on Midvale Boulevard. She remembers walking in on her first day to a cold reception from her lieutenant.

“He said, ‘Why did they put you here? There’s no place for you here,’” she remembers. “I was a little taken aback.”

Nevertheless, she explained to the officer that Station 9 was her first-choice firehouse because it put her in a position to serve her own neighborhood. The officer, days from retirement, moved on and Laurenzi kept her chin up.

“There is no officer now that would ever dream of saying something like that to anybody,” Laurenzi said, adding that the department has evolved a lot in the 28 years since she joined.

Her career took her from Fire Station 9 to Station 6, then to the north side at Station 10, westward to Stations 7 and 12, and then back to 9. After serving as a firefighter, paramedic, and fire lieutenant, she was promoted to Division Chief of Special Teams and Grants in January 2012. A year later, she was promoted to Assistant Chief of Administration where she remained until her last day, January 17, 2017.

While a paramedic out of Station 10, she said the longer transport times gave her the opportunity to get to know her patients.

“Certainly if the call was acute, you were pining to be at Station 6, closer to the hospital,” she said. “But if it was a call where time wasn’t of the essence, I enjoyed spending time with the people we served. I've talked to some amazing people throughout the years.”

It was her role as Assistant Chief of Administration that really brought together her skills as an accountant and her expertise in fire and EMS. Tasked with tracking resources throughout the department — from budgetary funds to medical supplies to allocation of services — her proficiency with finance and statistics led to greater efficiencies and accountability within the department.

She looks back on her time here with immense gratitude.

“I’ve been blessed to have a job I loved; to work for the City of Madison, which has been a great employer; to live in a department that cares about the people we serve and that we serve so deeply. I can’t imagine a more fulfilling career.”

Several initiatives were developed during her time at MFD, but she’s particularly proud of the Community Paramedicine program which launched about a year ago in partnership with UnityPoint Health-Meriter and UW Hospital. She says the burgeoning program has the potential to make one of the greatest impacts on the community, especially as the healthcare and insurance industries face potential changes related to the Affordable Care Act.

“It’s a unique opportunity for us to interface with the community in a more preventative role, and I’m proud that we were able to provide this with minimal cost to the city,” she said.

She’s especially grateful for the people “behind the scenes” who really keep the Fire Department going.

“The things we’re able to do as a department could not be done without the support staff at Fire Admin. I think they are unsung heroes,” she explained. “It’s often overlooked how important their roles are, which make it possible for the people in the field to do their jobs.”

In her retirement, Laurenzi looks forward to having more time to travel with her wife, Kris, and to be with family. But she’s not done serving the community. She’ll continue to do part-time accounting for a local coffee company, and after some well-deserved rest and relaxation she’ll decide exactly what to do next.

“We were raised to give back when you’re blessed. To have been able to make a career of giving back — I couldn’t think of a better job.”

This content is free for use with credit to the City of Madison - Fire and a link back to the original post.
Category: Station 6, Station 7, Station 9, Station 10, Station 12